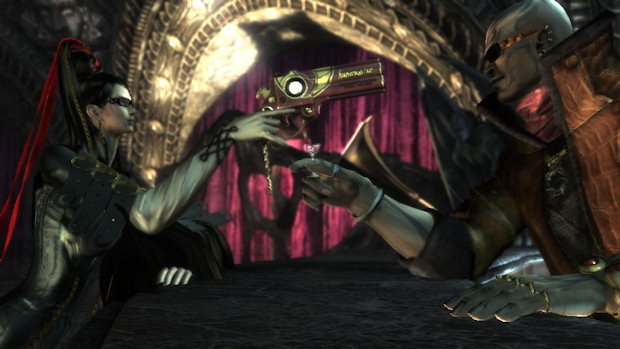 It seems that Platinum Games has finally had enough of the Sarah Palin comparisons, and I can’t say I blame them. That crap got old last year, but that hasn’t stopped the “joke” from being driven into the ground. The Bayonetta developers have finally responded to the endless accusations that their titular character resembles the former Vice Presidential candidate.

When recently asked about the comparisons, a weary Hideki Kamiya (director) asked, “People are still talking about that? … Honestly, the only thing that I see in common is that they both wear glasses.

“Yeah, It is old. Well, you know the thing is, in the US they say Sarah Palin. In Japan, they always bring up people like Angela Aki. I think they say something similar in every country. That country’s famous glasses girl … The thing with that impression is, you know, we’ve put out plenty of trailers now, and when you play the game and see the cutscenes, I think people will recognize Bayonetta as Bayonetta. Then people will look at Sarah Palin and say that she looks like Bayonetta.”

When Kamiya talks about the “famous glasses girl” I think he makes a very good point about how superficial gamers can be. The similarity between Bayonetta and Palin really does begin and end with the glasses, and I think it’s very shallow that that’s all people needed to make a comparison. Perhaps this is time for some introspection from those who perpetuated the myth?

Or maybe they’ll just go back to claiming that women who are far out of their league aren’t “hot” or “bangable,” since that’s what these types of people do best.