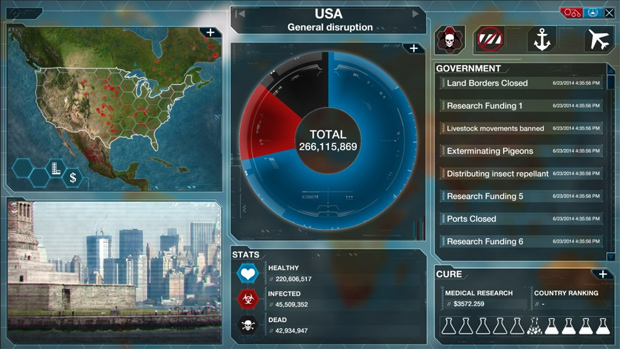 Ndemic Creations’ Plague Inc. is one of those mobile games to do so well that it would be silly not to bring it to other platforms, in this case PC. An expanded version of the game, Plague Inc: Evolved, is headed to Steam Early Access on February 20, 2014.

This release will have both coopearative and competitive multiplayer; custom scenarios (e.g., plagues and worlds) that can be shared on Steam Workshop, which sounds potentially hilarious; improved graphics; and more data in the form of stats, graphics, and replays.

As for the original mobile version of Plague Inc, that’s not going anywhere. According to Ndemic, “We have designed Plague Inc: Evolved carefully so that updates can easily be applied to games on PC and mobile. We still have loads of plans for Plague Inc. and lots of new updates are on their way.” A price hasn’t been given yet, but expect the PC game to cost more than $0.99.