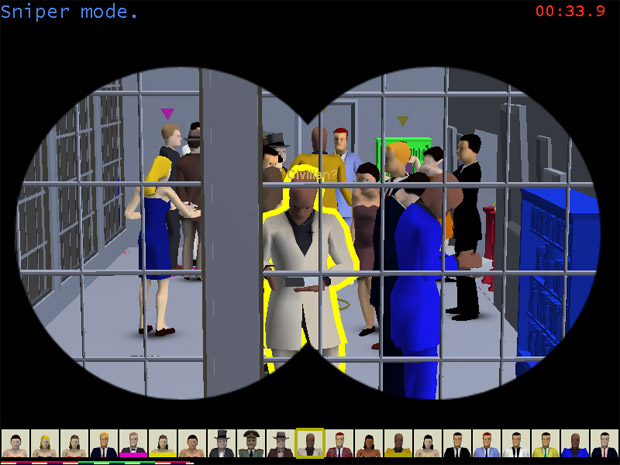 I don’t want to go full-on hyperbolic and say that SpyParty was the most-talked-about game at PAX Prime, but it certainly ranks up there near the top. As far as I can tell, there were a few reasons for this. The game’s obscurity and “how does it work?” nature seemed to be two of the bigger factors.

At the beginning of the show, virtually no one knew what SpyParty was; it’s a bummer, I know. As PAX progressed, though, a chain reaction of friends telling friends about how rad and unlike anything else it was occurred in a tremendous way.

Because SpyParty is complex, and doesn’t immediately scream what it’s all about explicitly, PAX attendees were forced to stick around until their curiosity was met by Chris Hecker and co. Oh, and the ridiculously in-depth instruction manuals that were being handed out helped, sort of.

So, what was the complete SpyParty experience? It goes a little something like this:

You start off by grabbing a copy of the aforementioned instruction manual. It is densely packed with the game’s backstory, controls for both the Spy and the Sniper, and everything else you may or may not need to eventually know. For the curious, here’s what it looks like.

After that, you put the manual down and wait for your turn to play. You pass the time by watching the current players do their thing, and begin thinking to yourself, “Hey, I totally get this now.” 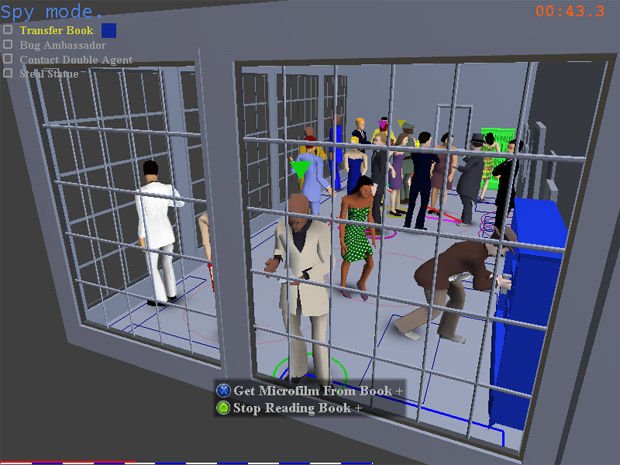 The time has come. You sit down in one of two chairs next to a table holding two back-to-back televisions. You now get to choose if you want to be the Sniper or the Spy, select what the major characters will look like, and pick up to four Spy objectives.

Suddenly, you begin panicking. You read the instruction manual, but oh God, every last juicy detail about the controls has slipped your mind under the pressure of playing in front of a live audience. Thankfully, SpyParty designer Chris Hecker and his friends are there to walk you through the process with tips.

If you are the Spy, you begin maneuvering your character similar to how the NPCs move and get into the AI mindset; you’re trying to blend in with the crowd. If you are the Sniper, your eyes are darting across the screen, hoping the Spy slips up or you catch one of the painfully subtle (at first) tells that come with performing Spy actions.

As the time limit inches closer to zero, you have a decision to face: do you go off of a hunch and fire your single bullet into the crowd? Or do you wait a little longer, hoping that the Spy will add more time to the match by going up to a window and enabling an obvious tell?

If you’re me, you say to yourself, “Crap, I don’t know who the Spy is!” only to have some random dude help you out. “It’s him, that’s the guy! He kept screwing around the bookcase. Shoot him!”

You pull the trigger.

The on-screen character falls, and the audience behind squeals out in pure geek delight.

A victory by way of crowdsourcing is still a victory.