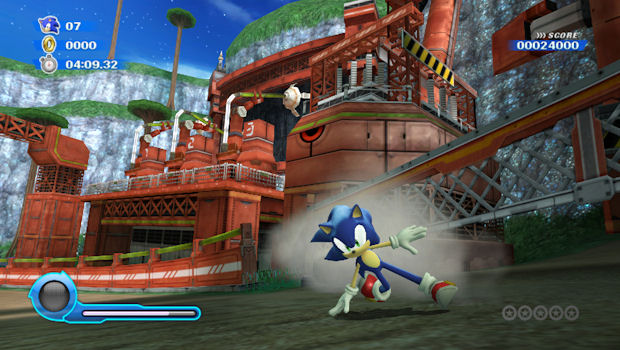 It’s bemusing to think that Sonic 4, the game everybody wanted, is getting upstaged by Sonic Colors, a game that continues in the same tradition as games people hated. That is exactly what has happened, though. Sonic Colors is looking damn good in spite of its 3D leanings, and it’s getting all the attention.

Sega rolled into PAX Prime with an all-new build of the Wii version and Destructoid was on hand to check it out. Read on to find out how the game is shaping up!

When I last played Sonic Colors, I came away with the impression that Sega had taken all the good bits from Sonic Unleashed, and left all the garbage behind. Having played yet more of the game, I see absolutely nothing to dissuade me from this opinion. Sonic Colors is still everything good about Sonic Unleashed, without the crap.

So, what is it that Sonic Colors is doing that previous 3D Sonic titles isn’t? Part of the appeal is the removal of cheap pitfall deaths. One of the worst parts of previous Sonic games was the fact that the fast-moving hedgehog was expected to blitz along precariously thin platforms without any rails. The focus on death-plummeting appears to have been totally removed from Sonic Colors.

Without the reliance on pitfalls, Sega has worked harder on level design. One level involves Sonic having to run along a platform full of gutters, timing his approach to avoid gigantic missiles that regularly fly his way. Many sections of the game switch to a 2D perspective in the same seamless fashion that Sonic Unleashed did, only the platforming is much tighter and more fun to control.

The Wisps are a big part of that, conferring special abilities upon Sonic once collected. I got to play with new Wisps, such as the green one that transforms Sonic into a little ghost-like creature, but the yellow Wisp is still the star of the show. Being able to drill through levels is bizarrely satisfying and has yet to get old. We’ll see how it fares in the full game, but right now it’s pretty awesome.

When you think about people playing a 3D Sonic game that doesn’t make their eyes bleed, it’s small wonder that Colors has managed to upstage Sonic 4.