Fire Hose Games’ Slam Bolt Scrappers was my personal favorite game at PAX Prime. So much so, that I found myself continuously pushing it on my coworkers, and in some cases, dragging them back to the booth with me. They loved it, too.

It’s weird. At first, you aren’t sure what’s happening on the screen. Slam Bolt Scrappers involves two teams floating around, beating up on each other, fighting demons — who then proceed to turn into colored blocks — and using said blocks as if they were playing Tetris.

Once enough blocks of the same color touch, a turret is formed; these can either defend or attack, but ultimately, the goal is to eliminate the enemy team’s blocks. All of them. This means battles can go on for quite a while, and there’s more than enough room for comebacks.

In fact, I think every match I played involved someone coming back at the last possible minute.

At one point during the weekend, Samit and I teamed up against Conrad and Fire Hose Games’ president and founder Eitan Glinert. We were moments away from winning, but another press outlet showed up and Eitan told them something to the effect of “just give me a few seconds.”

He then proceeded to — out of effing nowhere — beat us in a matter of seconds. Either he was holding out on us the entire time, or he totally used a developer code. I wouldn’t put the latter option past him. At any rate, it was a memorable moment that I was glad to be a part of. 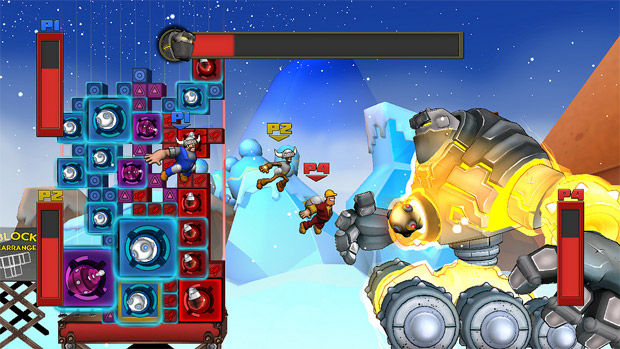 What I’ve been describing so far is Slam Bolt Scrappers‘ versus mode, which probably has a more attractive name that’s slipped my mind. We also had the opportunity to play a four-person co-op boss battle against a gigantic robot fiend. Much like the human-on-human competitive stuff, we built up our blocks to form turrets.

The difference here was that in order to damage the killer robot, we’d first have to punch a conveniently located weak point to deactivate his shields, allowing our turrets to get their groove on. What’s more, he would occasionally throw out snow that’d fill up part of our playing field, preventing new blocks from being placed.

I’m paraphrasing here again, but Eitan mentioned how “punching would solve our problems just like in real life.” He also told us that Slam Bolt Scrappers would have an entire story mode beyond the aforementioned — and super slick — versus multiplayer, using Castle Crashers as an example.

It may not come across as much in words as it did in person, but man, I thought the snow bit was a nice touch. If they can introduce new mechanics like that throughout the game, more power to them. Either way, the core amalgamation of Tetris and Super Smash Bros. is enough to carry this on its own.

Slam Bolt Scrappers is hitting PlayStation Network in “early 2011” as an exclusive. I usually end these sorts of things with the date and platform, but I feel compelled to tell you about the development team. They all wore firefighter hats, which may or may not be an unlockable item, for the duration.