If you’re not familiar with Red 5 Studios, I can’t say that I blame you. FireFall is the first major project they’ve announced since they formed. That’s not to say that they’ve been idle — the game has been in development for nearly 4 years, and they’ve been reaching out in a major recruitment effort for years to draw top-tier talent to their banner.

After catching a glimpse of the fruits of Red 5’s labor for the first time at PAX, it’s obvious that there’s no shortage of either talent or ambition behind FireFall. It’s a massive online shooter that offers skill-based combat, a squad/clan support structure, multiple classes, a dynamic world that responds to server-wide events, and all the loot whoring you’d expect from a team with a strong MMO pedigree.

Watching the tail end of a public demo on the showfloor, the crowd that was gathered outright cheered when the presentation ended. Later, I spent some time with Red 5 CEO and former WoW lead Mark Kern for a hands-off demo of the game, and I’ve got to agree with the PAX masses on this one — there’s a whole messload of potential here.

The game takes place on Earth 200 years in the future, and humans have discovered a massive untapped energy source known as Crystite. Unfortunately, mining this stuff eventually results in a massive energy surge known as The Melding. This destructive pulse wants to stop the world and meld with you, and so humanity is forced to survive in small shielded pockets. Eventually, they emerge to rebuild and fight with other humans and The Chosen (a race created by the release of The Melding) over the resources that remain. 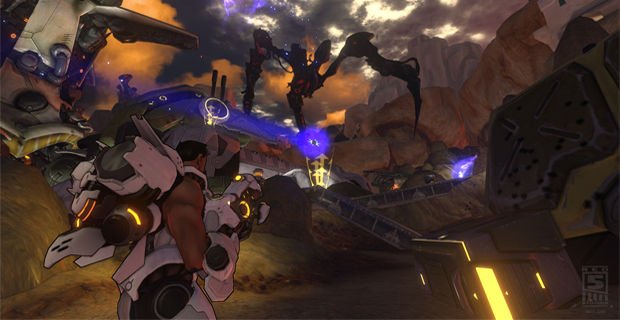 FireFall is an interesting hybrid of a game. On the one hand, it’s a twitch shooter with a colorful visual style that may draw some comparisons to Borderlands, despite the fact that the land mass available here for gameplay seriously dwarfs Pandora in size. Mark emphasized several times that the goal of the core shooting mechanics is to make the game as skill-based an experience as possible. As such, there are no dice rolls.

On the other hand, it’s also a MMO with a wide variety of missions to offer. There are story based solo missions, clan/team based missions, dynamic server-wide missions, even content dependent on day/night cycles or seasons. One event that was demoed involved the siege of a mining hub town called Dredge; if the players present in the event fail to protect the town, then that hub becomes unavailable to all players on the server until a new mission to retake the town is successfully completed.

While you can focus on soloing your character, it’s clear that the design places a large emphasis on the clan system. Completing missions with your team gives you individual resources, but also adds resources to a team pool that can be drawn upon to summon transports or the like. The game implements class-based mechanics through the use of the battle frame, which acts as a swapable load-out system. A single character can level up multiple classes within their battle  frame, allowing a smaller team to tackle a wide variety of missions without having to level up alternate characters.

Some odds & ends: The Tribes influence of lead designer Scott Youngblood is heavy here; yummy jetpack action was on display in spades. Mission difficulty will scale via a background AI director that will gauge team strength and adjust accordingly. The game also transitions beautifully from 1st to 3rd person perspectives to suit player preference. Sign-up for the beta has already begun, and most importantly, FireFall will be free-to-play from launch when it releases on PC in 2011.