Okay, first off, if you aren’t in this video, it doesn’t mean you’re NOT a Dtoid All-Star. You are sure to be seen in a future Dtoid All-Star feature, because you are important. For now, though, we have a video that contains a lineup of unquestionable prestige: ex-Dtoid Reviews Editor and current Epic Games writer Aaron Linde; ex-Dtoid Features Editor and current Gearbox Studios writer Anthony Burch; the most interesting man on the planet, Papa Burch; and current Dtoid Reviews Editor Jim Sterling — among many others. It’s quite a roll call, and it’s thanks to the power of Bit.Trip FATE that we all got together.

We were all too spellbound by the game to engage Alex Neuse much in the way of questions, but the video does show some gameplay you won’t see anywhere else. Combined with the full write-up below, that should satisfy you Bit.Trip maniacs for at least a day or two. Oh, who am I kidding? Bit.Trip fans can’t ever get enough of this series. I guess you’ll just have to make do with what you’ve got.

Sorry Other: M, you just don’t cut the mustard.

[Update: OK, we have a less unintentionally glitchy video now. Hope you like it.] 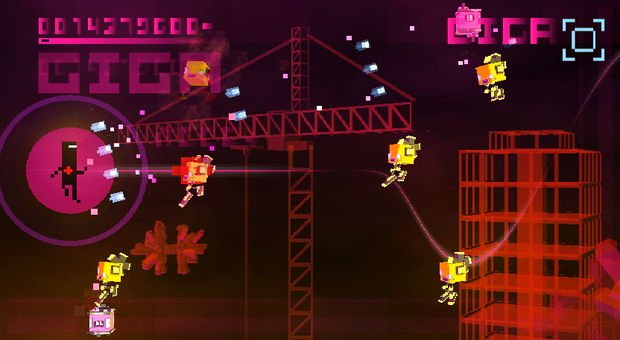 Bit.Trip FATE is the biggest game-changer in the Bit.Trip series to date. That’s saying a lot, given that every game in the Bit.Trip series has been something of a game-changer. BEAT, CORE, VOID, and RUNNER are all in different genres, and FATE is no different. This is the first Bit.Trip shmup, but more importantly, this is also the first actively violent game in this decidedly pacifistic series. Sure, RUNNER asked series protagonist Commander Video to jump-kick a few boxes and blow up the occasional boss, but actions like that were never the goal. The goal of RUNNER was to get to the end. In FATE, the goal is to destroy. The time for innocent obstacles and non-violent solutions is over. The feeling of invincibility is gone, too. FATE is about facing an army of actively aggressive enemy combatants, and the feeling of constant threat that they bring.

Don’t feel too bad for Commander Video, though. He’s pretty badass. Armed with some unknown force, he can shoot anywhere he wants to on-screen. Point with the Wii Remote anywhere you want, then press and hold B, and you’re killing anything and everything in sight. Sounds too easy to be a Bit.Trip game, right? That’s actually how it feels — for the first couple of seconds. It’s only after that brief initial period of acclimation to FATE that you’ll take hold of the clever limitations that the game puts upon you. Though you can shoot wherever you want, your mobility is limited. You can only move along a set path, called the “fate line.” You need to constantly plan your movements based on the path of this unbreakable line, which, by the end of the game, leads you to… something. 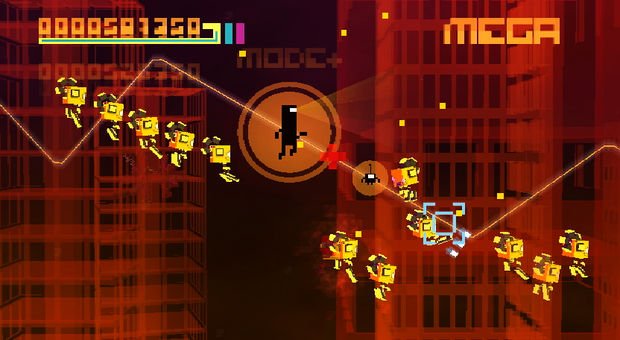 Planning for safe travel upon your predetermined fate is just one of the strategies necessary for surviving this war. You’ll also have to manage your offensive and defensive techniques in equal measure, as attacking slows your character movement by about 50%. Stop firing, and you’ll get a burst of speed. That speed might be the only thing that can save you from a flurry of incoming bullets, but you can’t stay fast forever. You’ll eventually need to fire off your own bullet barrage, preferably after you’ve found a safe(r) place to hide.

Longtime series fans will be happy to see the return of the “Nether, Mega, Super, Ultra, Giga” health system from Bit.Trip BEAT, CORE, and VOID. Each word signifies both your level of health and your firepower (Nether being the weakest and closest to death, Giga being the strongest and most resilient). If your hit box (signified by the throbbing, cross-shaped core in Commander Video’s chest) makes contact with an enemy’s attack, you’ll drop down a level. The only way to get your health and firepower back up is to earn points. That means you’ll need to go back on the offensive, as destroying enemies is the only way to increase your score. The closer you are to death, the more important it is that you play aggressively, as that’s the only way to pull yourself back from the brink. 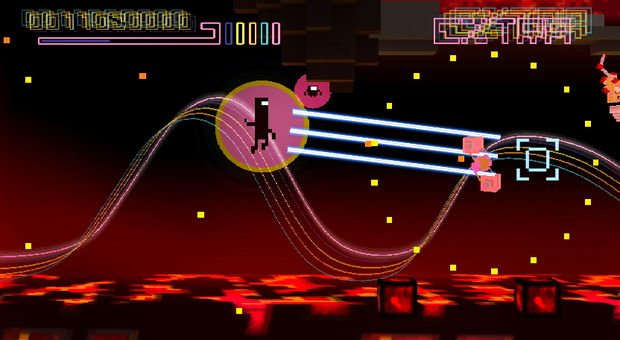 The balancing act between offensive and defensive techniques doesn’t end there. Strewn throughout each stage are multiple power-ups, each represented by one of Commander Video’s friends (CommandGirl Video, Junior Melchkin, Meat Boy, and Mr. Robotube). These power-ups tend to lie in dangerous places, but grabbing one is almost always worth the risk. Each power-up alters your bullet pattern in an eye-catching, devastating way. ComandGirl Video allows you to shoot in ten directions at once, Junior Melchkin gives you a laser attack, Meat Boy gives you a giant bullet-absorbing blast, etc. Whichever friend you acquire will circle you for as long as they’re active, protecting you from any enemy bullets that they collide with. These power-ups are time-limited. I guarantee you’ll be sad to see them go.

Speaking of sadness, the game’s soundtrack and visuals speak to an overarching sense of loneliness. At different moments during our playthrough, at least two Destructoid editors (Ashley Davis and Chad Concelmo immediately come to mind) exclaimed “It’s so sad,” with a tone of genuine, unadulterated empathy. Personally, I didn’t feel sadness while playing the game, but I did feel that Commander Video was struggling against more than the throngs of enemies that surrounded him at all times. I couldn’t shake the feeling that he was lost, and that his new sense of violent power was to be fleeting at best. For a two-dimensional character that is yet to speak a full sentence in any of his games, he sure is interesting. 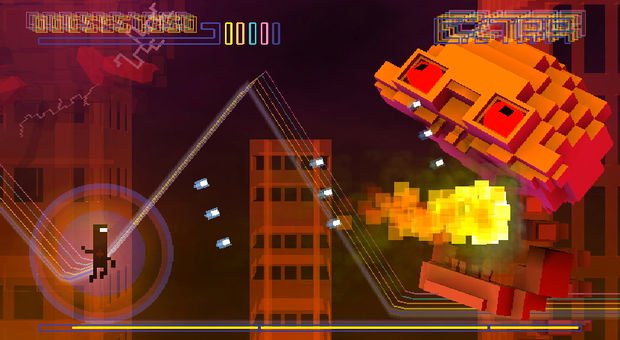 Speaking of enemies, FATE has quite the dynamic bestiary. For the most part, the game’s standard enemies and bosses come off as more disturbed than evil. They often appear to be deformed, maybe tortured, and at least partially unaware of what they’re doing. The game’s first boss rubs his own brain during battle, while staring blankly at you, the player, as Commander Video continually showers him with bullets. It’s pretty off-putting, but also amusing. The world of Bit.Trip FATE is bizarre, cute, ugly, sad, and cool, all at once.

It’s all these things that make FATE feel like the bravest entry in this already risk-heavy series. That said, Bit.Trip purists have nothing to worry about; this still feels like a Bit.Trip game. The music is still naturally connected to your on-screen actions. You’ll still need to take in the whole screen at once in order to survive, and while doing so, you’ll still enter “the zone” that the Bit.Trip series has become infamous for. Play this game long enough, and you will start to lose yourself. It wouldn’t be a Bit.Trip game if you didn’t.

But what are you losing yourself to this time? Anger? Sorrow? Isolation? Redemption? I know more than I can tell you now, but I will say this; we are all headed down the same path. We can’t control that. The only thing we can control are the choices we make along the way.

[BONUS TIME] Here is the special “Dtoid meets Bit.Trip” video, as seen at the Dtoid LIVE panel at PAX 10.