It’s been a long time coming, but it’s been well worth the wait

I’ve been talking with Berlin-based solo developer Johannes “Dek” Märtterer since early September of last year. Some of you may already be familiar with his work. He’s the creator of the charming neo-retro-styled roguelike platformer Path to the Sky, which, I should mention, has already been Greenlit on Steam.

Newer details on the game have been relatively scant in the last several months as he’s been hard at work on the title, but if you’ve followed his website or his Twitter account you may have seen some newer .gifs lifted from the build demonstrating progress that’s been made.

Now that Path to the Sky is tentatively slated for release on Steam Early Access in Q2 2015, Dek’s been kind enough to take the time out of his busy schedule to share with us some important details about the game itself and allowed us to premier the first official teaser seen above. 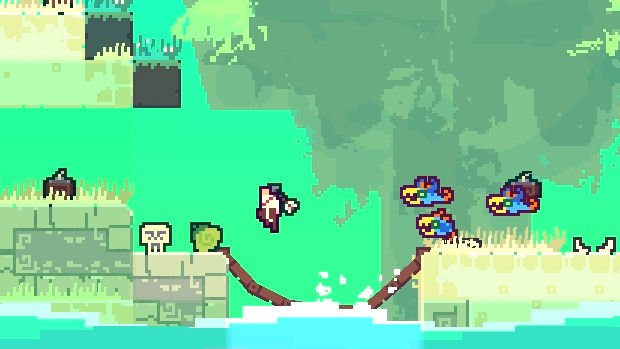 In Path to the Sky, you’ll play the role of a hired crewman aboard a spice trading vessel sailing the Indian Ocean during the 17th century. While on route, the ship is sacked and plundered by buccaneers. The vessel is sunk and its crew is lost to the sea. Alone, you find yourself stranded on the beach of an unknown island. This is where the adventure begins…

The player’s main objective is, of course, to stay alive and ultimately ascend to the topmost portions of the island in hopes for a rescue. However, things get complicated quickly as it turns out that the island is inhabited by various kinds of hostile birds which seem none too happy about your encroachment on their island home.

Dek classifies Path to the Sky as “a procedurally generated roguelike platformer,” which “inherits many of the things we associate from classic roguelikes, such as replayability, randomly generated items and levels; and, of course, swift and painful death.” Permadeath to be more specific. You’ll have only one shot to make it to the top, so you’ll need to make it count. 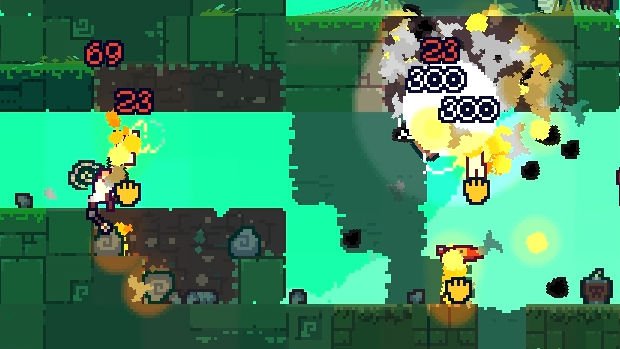 Path deviates from the norm somewhat in that it reverses the roguelike principle of entering a dungeon and descending floors; instead, as mentioned earlier, you’ll be tasked to climb ever upwards. The higher you climb, the harder the challenges you will face.

Physics will play an integral part within the game’s design. The developer elaborates on this by saying that “the player can interact with the environment in a very direct way. For example, shoot an arrow — it can bounce off a wall and hit an enemy taking cover behind an obstacle. Shoot an arrow through a fire that you’ve made, and you’ll create a burning arrow — and, with any luck, burning enemies.”

A good deal of thought has gone into inventory management as well. There is no magic Bag of Holding that will allow you carry around everything that you find. Instead, the player can only physically pick up items and place them on his back (max of five at the start) or put them back down on the ground again. Because you can only carry around a limited number of things, crafting will work more in a puzzle-like way rather than just allowing you to horde everything and create items on demand.

As mentioned, you’ll have the ability to craft new and more useful items as you explore the island. For example, you might come across a stick and a feather. Carry the stick to the feather and place it next to it and you’ll create an arrow. Once crafted, the item represented by the arrow will function as a quiver of sorts — one “arrow” will represent roughly ten shots, with a maximum carrying capacity of around 30. “I don’t want to make arrows something the player has to worry about too much, but I still want them to have to prepare for the bigger fights.”

The developer wraps things up saying that “there are many other things planned that are not shown in teaser provided for us today, but will be featured in finalized version of trailer, which we’ll be seeing later.” Examples include “friendly birds that can be controlled by the player to pick up items for you, or remotely activate parts of a puzzle.” And, of course, “tons of different items, enemies and environments.”

Dek also mentions that local co-op implementation is currently in the works, so for fans of teaming up with a friend definitely have something to look forward to.

For a one-person development team, I really have to admire how much he’s accomplished. Path to the Sky looks incredible on multiple levels. Whether you’re a fan of retro-inspired pixel art, challenging platform games, or rougelike randomness and permadeath, Dek’s labor of love has a little of something for everyone.