I’ll readily admit that I bounced off of Path of Exile when I first tried it in 2013. I played it when it was in open beta, and the overwhelming skill tree and muddy aesthetic didn’t gel with me, so I shelved it. After playing a preview of the upcoming update, The Fall of Oriath, I can see that I was a hasty butthole to dismiss it and I’m downloading it as we speak. 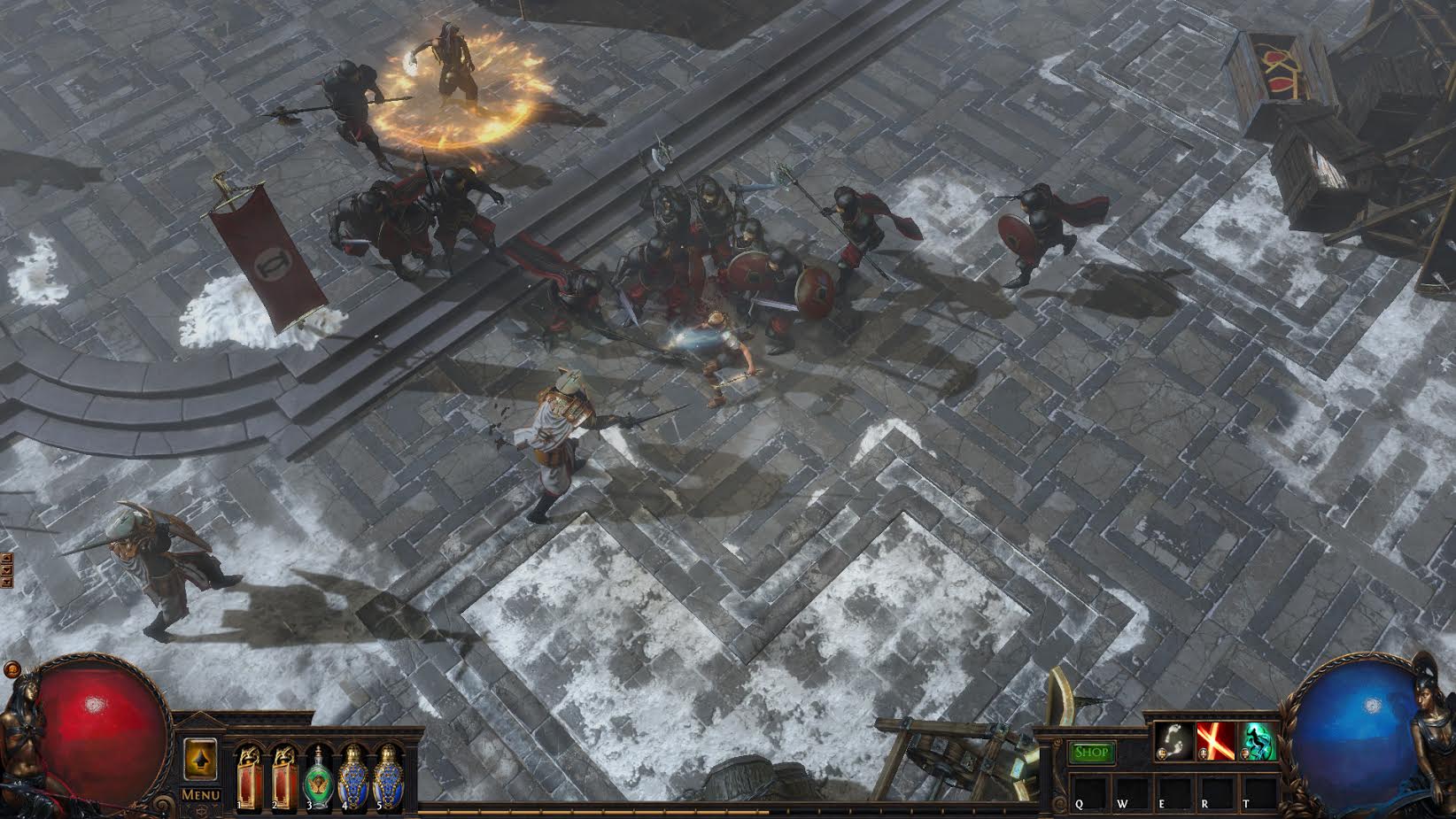 Since the overarching plot of Path of Exile deals with your character being banished from Oriath, the home of the templars, a vengeful return trip had to happen sooner or later. That’s what the new Act 5 in The Fall of Oriath is all about, an overdue bloody homecoming. With Grinding Gears watching me fumble with the controls and shaking off three years of cobwebs, I played as the Witch on a frozen summit, searching for a portal to Oriath. I immediately found the combat punchier than I remembered, with more heft to each spell and strike.

I was playing as a high-level character for preview purposes, so I enjoyed obliterating every creature I saw. Once I reached the portal, story beats that were lost on me occurred, and I was in an industrialized slave pen. Whoops. We skipped ahead to a multi-phase boss fight that forced me to either smartly position myself behind murderous statuesque automatons for cover or try my best at playing a bullet hell with point-and-click movement. The former was definitely the smart choice, but I’m not known for making those. With my lack of exposure to the full base game, it’s hard to say whether or not these new areas will be a breath of fresh air for veterans, but I want to explore what I saw on my own time. That’s always a good sign.

With this new update, Grinding Gears is shaking up the foundation of Path of Exile in a few ways (though it’ll still be free as always). First, the current difficulty system is going to away to make room for another five new acts. These won’t be all brand new areas, but rather a return to the areas seen in the first five acts after some time has passed. Characters that you’ve encountered will have changed in various ways. Some of them are enjoying elevated statuses, and others, well, may not have been so lucky. New areas will be interwoven so as to mitigate repetition.

There’s also a new mechanic in play called the Pantheon system. Gods of various shapes and sizes are running amok, and if you can slay them, you can assimilate some of their powers. There are major and minor gods and corresponding slots for their abilities. Unlike the character skill tree, these powers can be swapped around when outside of combat so that you can change your loadout on the fly. Instead of new skill gems, these are passive bonuses mostly on the defensive side of the spectrum, which encourages players to plan ahead. As expected, there’ll also be new weapons, skills, and bosses to keep all o’ you exiles happy.

I also had some time to play around with the Xbox One port, which felt more than comfortable on a controller. Abilities are mapped to the face buttons and a second set of commands are brought up with a trigger. Potions can be assigned to the directional pad, and it never felt cumbersome. When I said that I was surprised at how well it played with the pad, the devs laughed and said “Everyone says that!” I hadn’t intended it as an insult, but rather as an appreciation for translating a UI-heavy game onto console, because that doesn’t always go swimmingly. Since Path of Exile already has a thriving community, I imagine it’ll continue to do well on the Xbox, especially since players won’t have to wrestle with the buttons to get them to do what they want.

There’s no set date for The Fall of Oriath beyond later this year, but the update is going to make huge changes to the base game. Because of this, Grinding Gears is opening up the Legacy league on March 3. This will allow players to revisit leagues and items that have popped up in the last three years, giving them a chance to nab whatever they missed along the way.

And would you look at that, it’s done downloading. Goodbye free time.