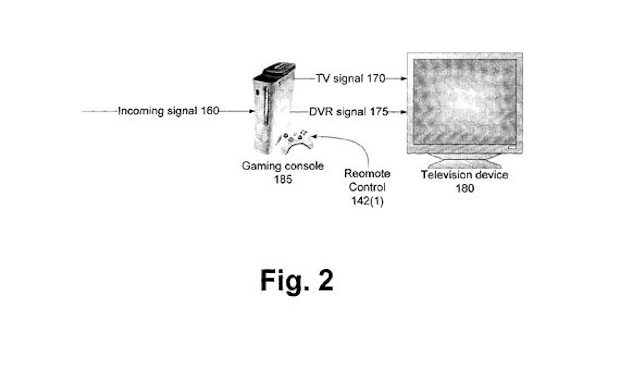 A new Microsoft patent shows a device that would be both a game console and a digital video recorder.

I’ll pause so you can make the same face I did. Tighten your lips and look off to your upper left and hold for a few seconds. There. That’s it.

The patent says this device would let you record television while gaming. The DVR menus would be integrated within the gaming side, letting users get their game on while managing their daytime soaps. Of course, like your trusty grey cable box, this device would continue recording, even when off.

This hybrid thing would record television programs, of course. Microsoft also suggests that it could nab gaming footage (local or online), rip music and movies, and so on.

So, a cable box with a disc drive and controller ports? Now I’m making the face you would when you see a dog eating its poop.

Note that while just granted, this patent has some age on it, as it was filed at the end of 2007. Microsoft may have no plans to use this. Things have changed with television since then. The latest update to the Xbox 360 to make it a streaming beast is more in line with what users want and need. Let’s keep going that direction.

Patents Show that the Next Xbox Might Be a DVR, Too [Kotaku]

Filed under... #Next Xbox Console#patent#Television