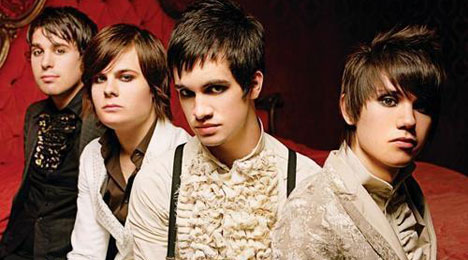 Are you ready to rock … and whine about your ex-girlfriend/boyfriend or girls/boys who won’t talk to you? Look no further than this fall’s first ever Rock Band Live Tour.

Headlined by Panic at the Disco and Dashboard Confessional (with special guests Plain White T’s and The Cab), the Rock Band Live Tour will offer fans a chance to play Rock Band on the main concert stage in-between the tour’s acts. Rock Band bands will be selected by local radio promotions and other national contests. Think you’ve got what it takes? You’ll have some competition.

“I’m practicing my Rock Band drumming,” said Dashboard Confessional singer-songwriter Chris Carrabba, “With any luck I’ll win a spot on stage to show what I can really do.”

Panic at the Disco already have a track featured on the Rock Band 2 disc (“Nine in the Afternoon”). According to Harmonix and MTV Games, we can also expect tracks from the other touring bands to appear as downloadable content sometime in the future.

The full tour schedule can be found after the jump.

Having a hard time reading this? Buy some glasses, or a bigger version can be found in our gallery.