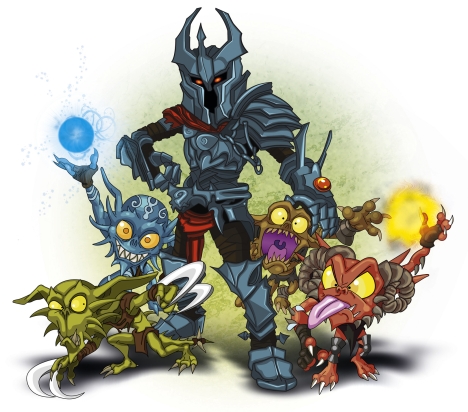 Overlord Minions sees players as one of four Minions as the are on a special quest on behalf of the Overlord to prevent a Cult from resurrecting a dragon that could threaten the Overlord’s rule. Players will be using the touchscreen to fight enemies and solve the games many puzzles.

I had more to say, but I forgot what it was when I read the fact sheet, as it says one of the Minions has a fart dart attack. Fart dart. Fart. Dart.

US Gamers Day// Meet Giblet, Blaze, Stench, and Zap – an elite Minion crew who, assisted by minion master Gnarl, get star billing in Overlord Minions, an irresistible and accessible puzzle action game, designed exclusively for Nintendo DS. In Overlord Minions, the Overlord commands the Minion team remotely. The Nintendo DS stylus becomes an extension of his evil will and every precise touch screen command is the player-as-Overlord directing, commanding and combining minions in battle, pointing and sweeping them to attack enemies and solving puzzles to execute his dastardly plans.

Controlling the Special Farces team of four, players negotiate fiendish levels and take on a huge range of warped enemies to hunt down the Kindred, a cult dedicated to resurrecting the mighty Dragon Kin, a race of humanoid dragon hybrids, determined to replace the Overlord’s despotism with their own. Extending the Overlord series’ trademark humour, gameplay focuses on the mischievous physical comedy of the minion’s antics and is delivered in a gloriously realised cartoon visual style.

• Exclusive Overlord Adventure for Nintendo DS: Use the DS Stylus to command and combine your minions in battle and direct them to solve puzzles. Overlord Minions 100% touchscreen control system makes for intuitive, rewarding and accessible gameplay as you direct the mischievously malevolent minions through an unforgettable fantasy world.

• Control An Elite Minion Fighting Force: Command a crack squad of minions who’ll take on every order with a devilish smile on their face. Whether they’re going into battle, combining to perform increasingly powerful attacks or solving puzzles, their on-going banter and playful-yet-ferociously-violent nature perfectly compliments the unfolding carnage.

• Meet the Elite: Direct four of the most mischievous, malevolent and manic minions hand-picked for this new adventure. Control each minion individually or team them up to solve puzzles and perform more powerful attacks.

o Giblet is a brown minion and the main fighter, brave, willing, and a little dumb.
o Blaze is a pyromaniac red minion who throws fireballs as a powerful range attack.
o Stench is a smelly green minion who overpowers enemies with his fart dart amongst other obnoxious attacks.
o Zap is a blue minion and the mystic shaman of the unit. He channels magic through this body and can heal the other minions, should they be injured.
o Plus: Gnarl, Minion master and devoted servant of the Overlord, is on hand with information, tactical advice and a healthy hatred of elves.

• A new adventure in the twisted fantasy world of the Overlord: In this new story from award-winning games writer Rhianna Pratchett, the Minions must prevent Silas, head of a new Cult, resurrecting an almighty Dragon and threatening the Overlord’s totalitarianism. Prepare to battle a huge range of new enemies from infected sheep, goats, spiders, paladins, infected dwarves, mutated trolls, scorpions, winged elves and many more to take on.

• Playing for laughs: Overlord Minions extends the Overlord series’ trademark humour and plays on the mischievous physical comedy of the minion’s antics.