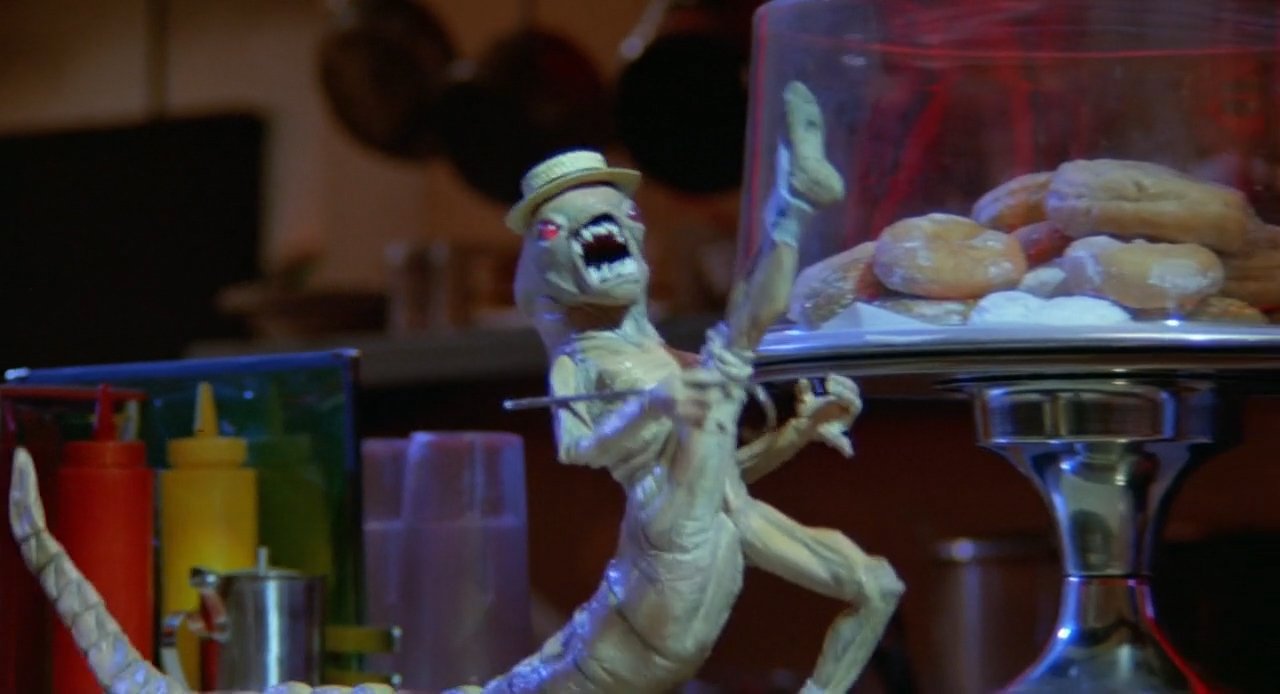 [LaScary (the artist formerly known as LaTerry) and I have something in common. I don’t mix well with horror games typically. For me, it’s not even the scary stuff that gets to me. I’m fine with that. It’s that dreaded resource management that kills me, and this genre loves to shoehorn that in to everything. I end up stressing out so much over it that I eventually spend more time outside smoking cigarettes than actually playing the damn game.

My dude here took up the call of arms for this month’s Bloggers Wanted, and he found himself on the Front Page as a result! There’s still one more day left in the month, so head over to the Cblogs and get writing! – Kevin]

I don’t do well with horror games. I can’t handle them even if I love the ideas behind them. The only one that I’ve been able to finish was P.T. and that was only because my brother was also in the room with me. It was just a tech demo!

Some time ago, Alien: Isolation went on sale on Steam and one of my friends convinced me to buy it. We were going to play it at the same time and voice chat while we did. I suspect he just wanted to hear me whimper like a small hurt child, and if that was the case he definitely got his wish. The game starts out fine enough. The opening scenes are free from danger and dread. There’s just a bit of narrative build up to when everything goes wrong. 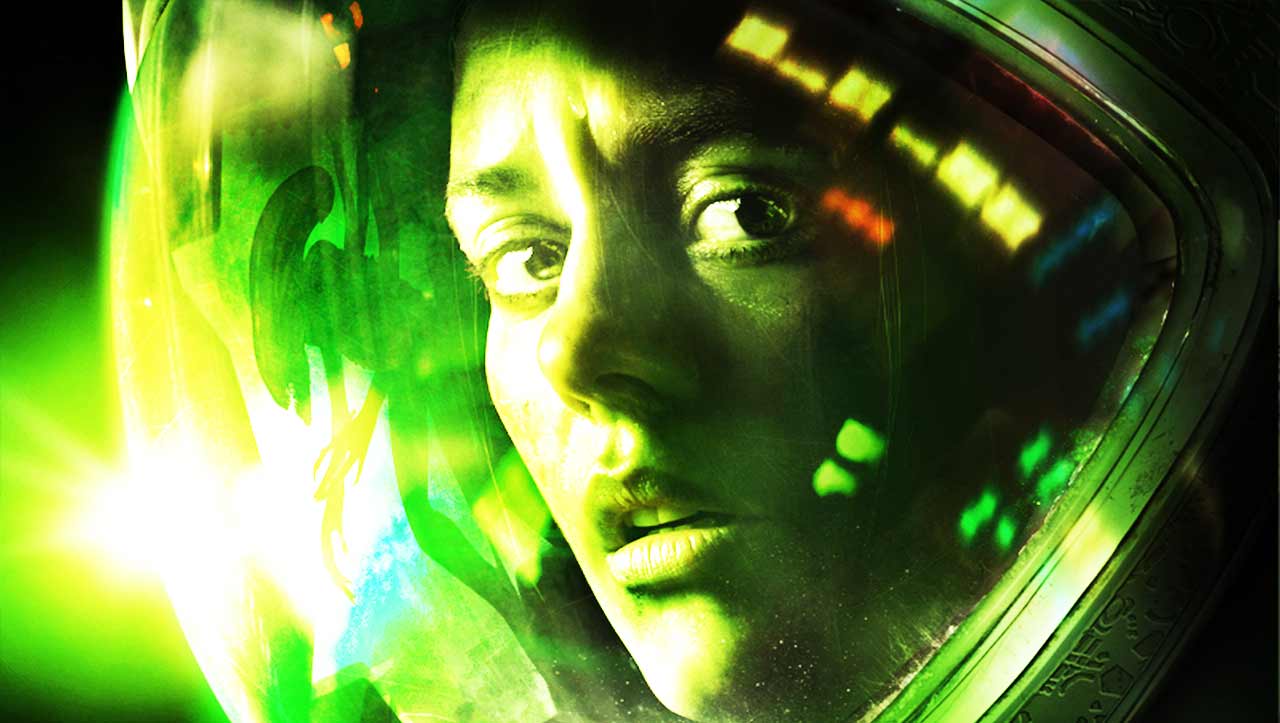 If you haven’t played the game, you play as, Amanda Ripley, the daughter of Ellen Ripley from the original movie. Amanda hears about a possible lead for her missing mother and goes out into space in search of her. She comes upon a space station that is supposed to have clues about her mom, but it’s been damaged, and its communications are out. Amanda attempts to board the space station but is hit by debris and loses contact with the group that she came with. She is now trapped on a spaceship with a Xenomorph. Lovely. 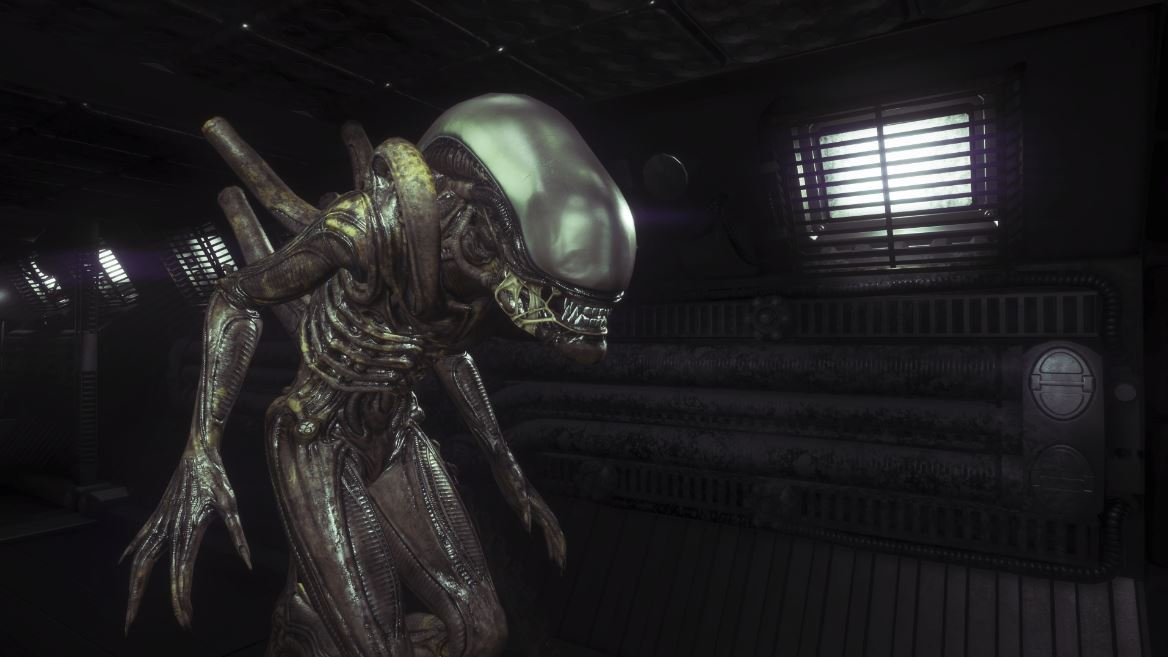 The Xenomorph can hardly wait.

Alien: Isolation is a terrifying game in all the right ways. Once you enter the space station and the real game begins, nothing will hurt you for about an hour. I was convinced that I was going to die every time I turned a corner. Since the location is a derelict space station with a prowling alien, the devs got creative with the sound design. The space station creaks and groans in horrible ways. There’s an ambient sound that slowly and insidiously gets under your skin and pokes your heart to make it jumpy. The alien is crawling around in the vents, and sometimes you can hear its footsteps or its tail slithering across the ground. There are some robots who are probably malfunctioning that mutter to themselves in warped voices. Long before I was in any real danger in the game, I was scared to open every door.

Somehow the person who uploaded this called it relaxing ambient noise.

The space station that you are exploring has seen a lot of death. The alien caused havoc, and the automatic protocols of the ships A.I. didn’t know how to handle the situation. People started rioting and killing each other. Early on in the game, you come upon a room filled with rows of body bags. This place is filled with death at every corner. You quickly learn that the alien won’t be your only issue. Everyone still living on this ship will see you as hostile. I was fine with this. I’ve played stealth games before. I can sneak around and avoid human characters. It was still spooky, but the human characters didn’t give me any problems.

Then the alien finally showed up. Your first few encounters are scripted, so it doesn’t kill you, but you quickly learn that this thing doesn’t mess around. It will crawl through the vents and come out of holes in the ceiling. It will always be looking for you. I was terrified, but my friend was there pushing me forward, so onward I went. We came upon the first area where the alien encounter wasn’t fully scripted. It starts out scripted, with the alien cutting through some NPCs, but then it starts to wander the area. It killed the NPCs in the area below where you walk in, and the door that you need to go through is right where it killed the people. My friend, who had played the game before, got through the room just fine. I couldn’t do anything. I kept walking around in circles trying to see if there was a safe way down, but I got too scared to check anymore, and I just ended up hiding in a side area. My friend informed me that this wouldn’t work. It would find me eventually. He tried to talk me through what I should do. It was all for nothing, as I wasn’t in a state of mind to follow his directions, and the alien ate my face off. 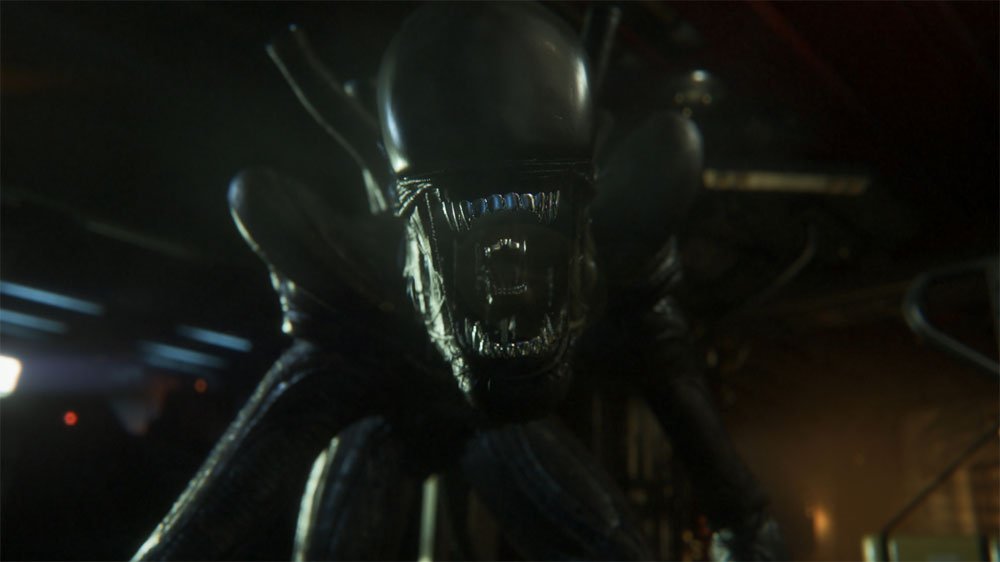 That was over a year ago now. I hadn’t played it since. Then this month’s bloggers wanted asked us to write about overcoming our fears, and I knew what I had to do. I needed to get past that moment in the game. I needed to overcome my fear of the alien! So I downloaded the game again and booted it up. I was a little lost for where to go at first since it had been so long, but I eventually reoriented myself and entered the room that I couldn’t get past before. I didn’t have my friend to help me this time, but I was determined.

The familiar screams of the NPCs reached my ears as the alien did away with them. Instead of hiding in the shadows and cowering in my space suit, I crept to the stairs and watched the alien do its dirty work. Then I saw it walk off and up the stairs opposite me. I took the opportunity, crept down the stairs, hacked the door, and suddenly I was clear for that mission.

That was easy, and now I’m embarrassed. Since it had been so long, I wasn’t influenced by two hours of creepy atmosphere like I had been the first time. I was in a video game state of mind instead of a trying not to soil my pants state of mind.

Well shoot, if that was so easy, I should easily be able to play even more of the game. I had just taken an elevator too, so the alien will take a while to catch back up to me. Heck, this’ll be simple. 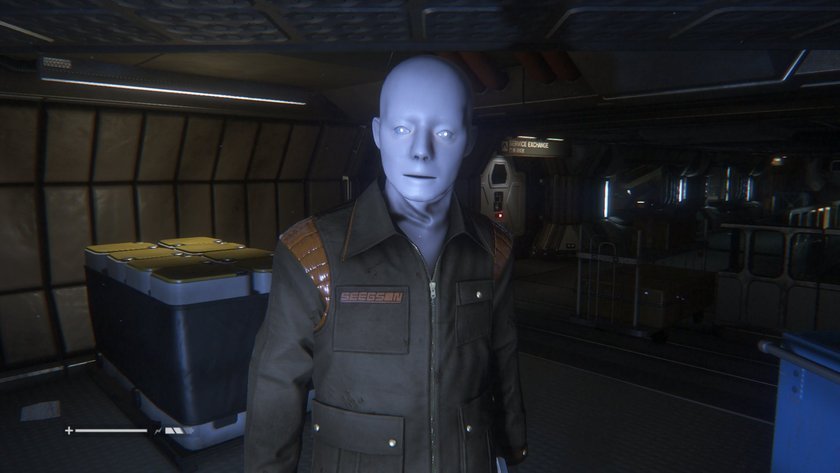 Just a friendly android who only wants to help you, and possibly curb stomp you if the situation warrants it.

But then there were androids. At first, they were cool. They were just doing their own thing, mostly ignoring me. Then, I tried to go to the communications room, and they weren’t going to have that. So I sneak in like any good video game protagonist, and, while creeping through the vents, I watch an android politely murder someone who was doing what I was doing. Oh. Now all the android were on the lookout for intruders, and this is getting creepy again.

It’s fine. The androids aren’t nearly as big a threat as the alien. I can handle the androids if I need to. Well, then, as I was sneaking along, an android spotted me, called one of his friends, and started chasing me. I tried to hide, but, in my panic, I went into a locker and then right back out as I was pressing the button repeatedly. I tried going back in again, but they had caught up to me, and they then proceeded to break my neck. 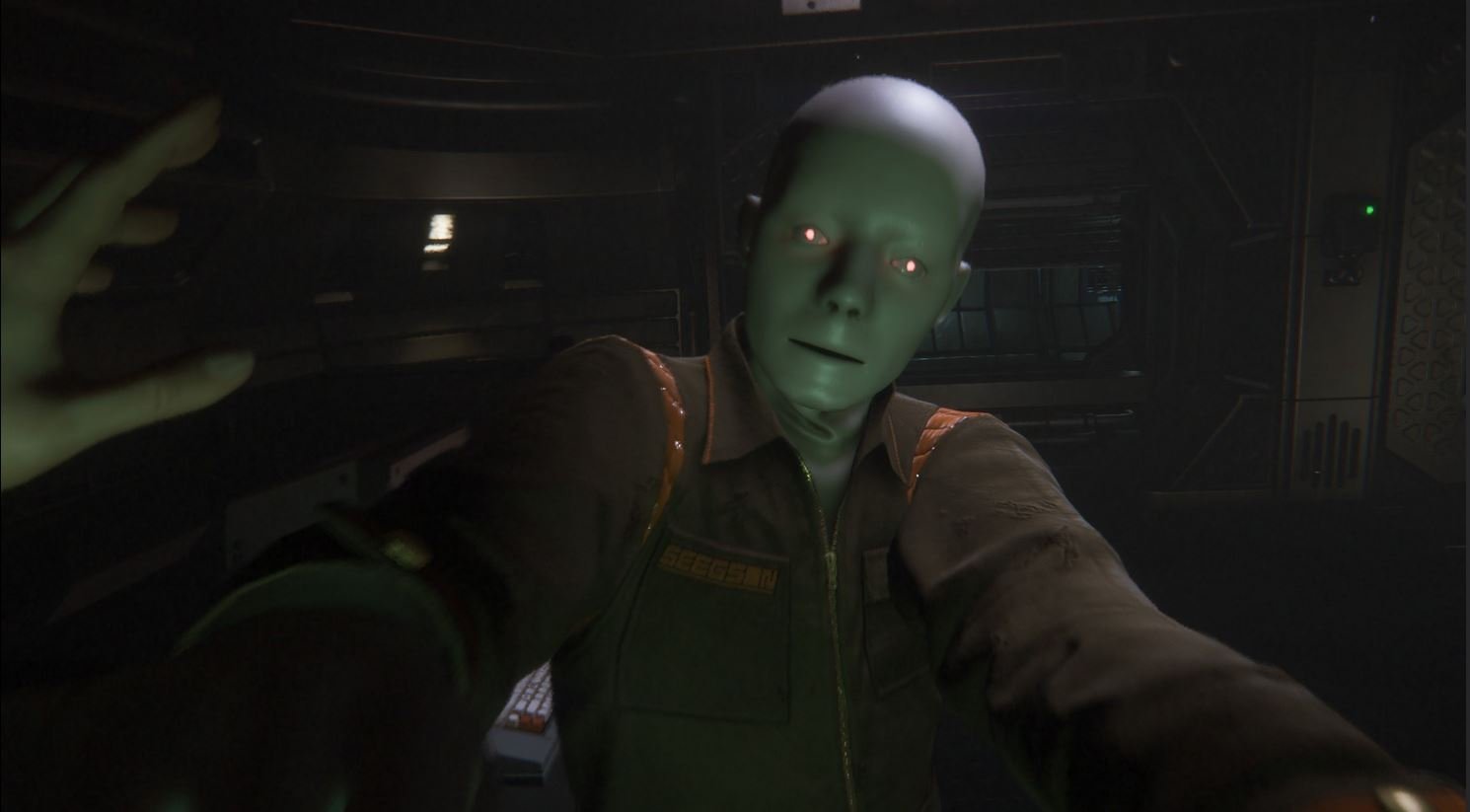 Oh good, their eyes are red now. That’s fine. It’s okay. I’m not creeped out by it.

Okay, this is fine. I can still do this. I upped my stealth game, watching out for the androids, and got past a big area. I hid behind a desk and nearly jumped when I saw a body behind the desk with me. It was clearly dead, so I ignored it and watched for any other androids to come by. As I made to step away from the desk, the screen shook, and I heard a “where are you going?” The body that was behind the desk was a damaged android, and now it had grabbed my leg.

I turned off the game. My heart was racing so fast. I couldn’t do this. I was already back to how I was a year ago when I was playing with my friend, and the alien wasn’t even there. I was wrong. I can’t handle this. I’m going back to colorful, lighthearted platformers about hats.