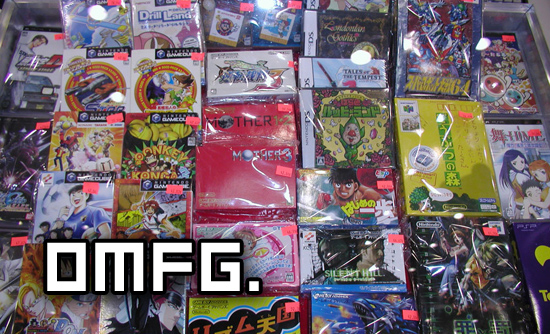 Held every summer, America’s most attended anime event isn’t about ninjas and tentacle rape as much as it is a celebration of Japanese media and culture as a whole. This, of course, includes videogames. Lots and lots of videogames. In fact, for those who happen to be gamers of the import or retro persuasion, it can be something akin to paradise if you know where to look. Let me tell you about it after the jump.
I had the pleasure of attending my fourth Otakon last weekend, and with me this year were Destructoid’s Features Editor Brad Rice, Associate Editor and music man Dale North, Art Team rockstar Phist, Resident A-Hole Puppetpallmich, Photographer Pedro, and Japanator Editors God Len, John Martone, and WestCabaretDrive. After we picked up our press passes, one of the first things we set our sights on was the fabled Dealer’s Room. If you’ve never been to Otakon, let me take a moment to describe this place. Imagine a room roughly the size of your local Target, K-Mart, or wherever you buy your laundry detergent and surge protectors. Now imagine that place filled with nothing but Japanese media and merchandise. Figures, artbooks, DVDs, posters, model robots, wallscrolls, candy, toys, plushies, you name it. Yeah, that’s about right.

Now I like anime just as much as the kids across the hall, but I have to admit that this wasn’t the reason I wanted to be there. I know a secret. While some congoers are shopping for pillowcases with Rurika Yamamoto printed on them, I was on a different mission. Hidden in the midst of all the Gundams and polyvinyl statues of naked chicks are some of the rarest gaming gems any collector could hope to find.

The cavernous “Hall F” of the Baltimore Convention Center was packed tightly with row after row of booths, tables, counters, boards, and anything else a merchant could use to peddle their wares, not to mention thousands of attendees. Walking through all of this madness in search of something worth this week’s paycheck, I pass a few booths selling Wii games and PSP cameras, used Gamecubes, etc. Then I hear a familiar melody above the din, getting louder by the second. The Katamari Damacy soundtrack. I pick up the pace now, probably trampling a dozen or so Naruto cosplayers and punching a few babies on the way (it’s all a blur at this point), until I arrive at a group of tables set up by an outfit called Mad Gear.

A famicom still in its original box. A Neo-Geo. Sega Saturn. A Super Famicom, bundled with Chrono Trigger. Attachments, controllers, hardware and peripherals, stuff never released outside of Japan. Best of all, tables holding mountains of games most Americans have never even heard of. Is that a Shin-Chan game for Game Boy? A boxed copy of Mother for the original Famicom? What do you mean, there was an Akira game? ZOMG GRADIUS. Holy crap, how many platforms was Final Fantasy 2 released on, anyway? They’re all there. Countless little squares of electronic sex, all displayed under glass cases put in place to protect them from the overactive salivary glands of people like me.

As I scan the goods and slowly sound out the katakana on their labels, I can’t help but wish some of my friends were here to see what I’m seeing. I picture Aaron snatching up everything in sight, yelling “Mine! Mine!” or Dyson pitching his wallet at the clerk like a fastball and then running away giggling with his arms full of imported hardware. Chad making his patented Chad face while he stuffs Colette‘s purse with as many cartridges as it can hold, her passing them to him as she makes some sort of “SQUEEEE” sound.

I could have easily spent the entire con just standing at this booth with my face pressed against the glass, but unfortunately, my wallet isn’t nearly as deep as my love for classic games. I did, however, score the one thing that I’d hoped to find; a game I’d been scouring the earth in search of for almost 7 years — a copy of Project Justice (Rival Schools 2) for Sega Dreamcast. The Japanese one. You know, the good one. The moment I walked away with that in my hand made my whole weekend.

So the next time there’s an anime convention in your area, consider going for at least one day. Even if anime isn’t your bag, there might be something there for you. Maybe something you haven’t been able to find anywhere else. Isn’t that worth having to see a couple of fat guys dressed as Tifa and Aeris? For me, the answer is … Almost.

Filed under... #Destroyer of Wallets