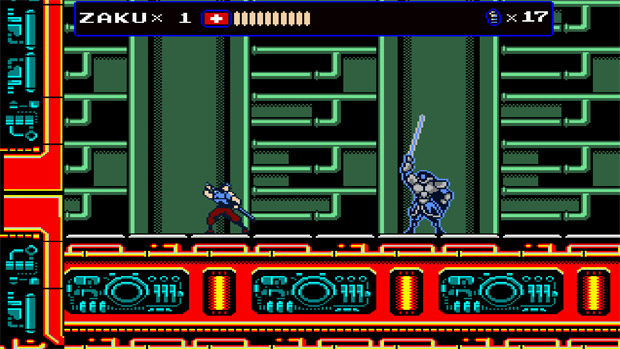 Having recently stated that I enjoy platformers unafraid of kicking my ass, the small group responsible for action-platformer Oniken jumped on the opportunity to get me to play.

This free-to-download PC title is in beta right now, which is the version I tried. (The key word here is “tried.”) On the official site, Oniken is described as being a tribute to the challenging 8-bit action game line-up of the NES, which is absolutely true. It feels like it fell out of the late eighties, except the controls were tightened up during the voyage.

They also describe the game as being “NES hard.” These dudes aren’t lying.

Available to play are three missions, none of which I have been able to complete yet. One time, I got close … I think! Oniken has loads of visually interesting things out to kill you, and even though you have grenades and wield a mighty sword, you’ve always got to be prepared for what’s immediately off-screen.

It doesn’t quite reach Mega Man levels of memorization, but you likely aren’t going to be successful on your first few attempts. When I got to the boss in the header image, I pretty much fumbled for fifteen seconds, not having a clue as to what I should be doing to avoid damage. About the only thing I could manage to remember during this time was how to breathe. It was awesome, and reminiscent of an overwhelming feeling that used to be the norm in gaming.

You already know if you’re into this type of experience or not. As tough as it was, the difficulty is still fairly balanced for the genre. Feeling courageous? Give Oniken a download.