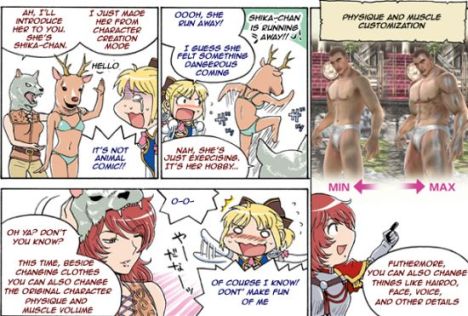 So Namco is going to be introducing a lot of new features in Soulcalibur IV. They know there’s going to be some information overload, so the good folks at Namco have released this very helpful manga guide that details how the game works and some of the new features that will be introduced into the game.

The manga stars newcomer, and good lookin’ gal, Princess Hilde Wolfkrone along with veteran, and also good lookin’ gal, Cassandra Alexandra. Cassandra helps out Hilde by showing her the basics to the game such as moving, basic fighting and so on. Eventually, Hilde becomes the teacher and shows Cassandra a thing or two about the new game.

Some of the new stuff looks pretty interesting. The levels will have “gimmicks” such as moving walls and armored soldiers coming at you and it also looks like character customization is getting overhauled. I’m going to make a character with a giant bulge and focus all of his attacks to involve his crotch. Just because I can.

Head on over to Japanator to check out the entire manga, which contains some half-nakedness, tee hee.

[Via Ota desho — Thanks, Christian]