If you were a gamer growing up in the States during the late 80s / early 90s, you had to subscribe to Nintendo Power or at least be close friends with someone who had. There were no bones about it! Sure, other gaming periodicals existed, but Nintendo Power had all the really juicy insider info.

That was the upside of being published in-house by Nintendo of America. The magazine was able to deliver an unprecedented level of content because there was no middleman. In addition to all the tips, tricks, and game maps you could want, there was the odd treat here and there. My favorite bonuses were the comics. The one-page strips starring Nintendo Power mascot Nester were alright, but they couldn’t hold a candle to the monthly serials.

For this first entry of Offbeat Hall of Fame, my new gamer culture reflection series, I wish to share with you the glory that is Nintendo Power‘s The Legend of Zelda: A Link to the Past… the comic! 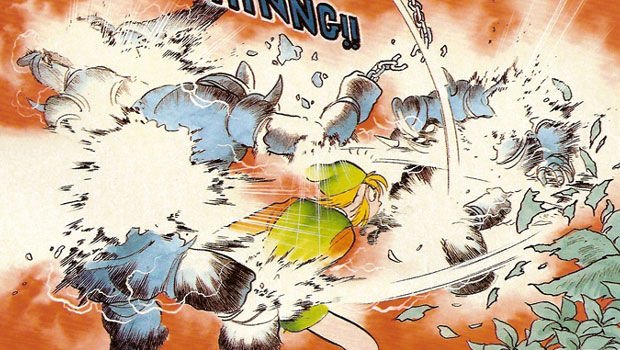 Imagine coming home from school and finding the latest Nintendo Power peeking beneath the stack of mail on the counter. Imagine racing to your bedroom with mag in hand, plopping on the bed, and flipping through that glossy tome. Now, imagine stumbling across a full-color, 16-page comic smack in the middle. How’s that for a surprise?

This was the January 1992 issue of Nintendo Power; the comic was an adaptation of A Link to the Past, obviously meant to promote the upcoming release of the game itself. This was no cheap cash-in, though! It was a year-long adventure by one of Japan’s greatest manga artists, Shotaro Ishinomori, creator of Cyborg 009 and the first two seasons of what would become the Super Sentai (Power Rangers) series! Have no doubt in your mind that there was love poured into these pages.

Want to the know the best part? The Zelda comic ran concurrently with another serial based on the Mario series. Remember, these were bonuses included on top of regular game coverage. Even if you ignored all the other features, these comics alone made picking up the latest volume worthwhile. Perhaps I’ll talk about Super Mario Adventures some other day; for now, it’s all about Zelda. 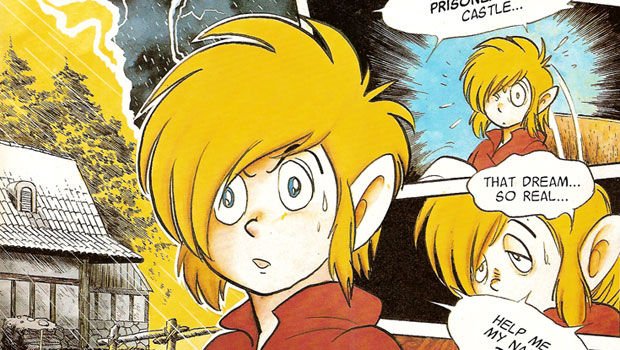 The first thing you’ll notice about ALttP is the artwork. Ishinomori is a legend from that burgeoning era of manga when the influence of Western animation was still readily apparent. Like Astro Boy creator Osamu Tezuka, Ishinomori had a style reminiscent of old Disney cartoons — characters squash and stretch, limbs are bendy and lack joints, and clothing and backgrounds are simple but eye-catching. There’s a habit these days in a lot of comics, both Western and Eastern, of artists’ obsessing over the minute details and creating an overly complex spectacle. That’s fine and all, but sometimes you have to scale back in order to draw the readers’ attention more effectively.

When the comic first hit, the only characterization of Link we were familiar with was the one from the DiC Entertainment cartoon. Though good at his core, this Link is overly self-confident, incredibly sarcastic, and more than a little bit of a horn dog. These aren’t exactly the qualities one would associate with the champion of all the land. 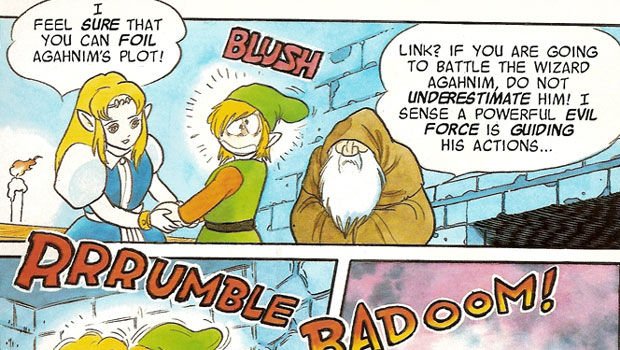 ALttP‘s Link feels much more in line with the character presented in the game — a mere child who knows little of the world and lacks formal combat training but puts others before himself. During any given battle, he goes from resolute to frightened, to confused, to shocked, to perplexed, and back to resolute. It’s all written on his face, which I liken to Wind Waker Link’s. That game’s exaggerated cartoon style lent itself well to a wide spectrum of expressions that added personality to a previously humorless machine (at least when it comes to Ocarina of Time‘s Link). Comic Link cycles through those myriad expressions as he struggles to grow in mind, body, and spirit at a rate no other person would be expected to do.

Though based on Link’s SNES journey, the comic understandably omits a lot of content while introducing elements of its own. Link begins his quest by answering Zelda’s telepathic summons and taking up the sword and shield from his fallen uncle, and from there, the story moves along at an incredible clip. Rather than having to navigate though puzzle-laden dungeons, Link merely visits the resting places of the Pendants of Virtue and engages in brief confrontations with the domain guardians. Once he enters the Dark World, you only ever see him rescue three of the seven maidens (I can only assume the others are found during the sporadic time skips). 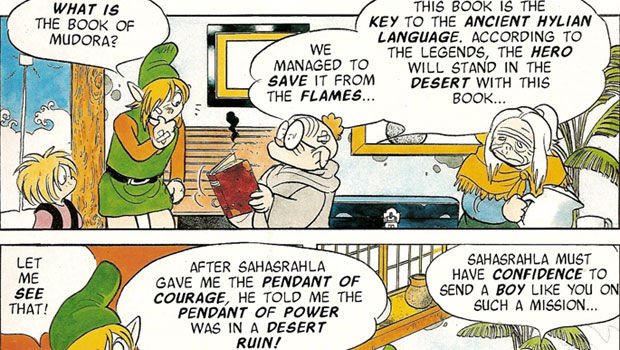 Reading through the entire comic run in one sitting gives the sense that the project was rushed through, and I know that’s not the case at all. The story is split into 12 chapters with 16 pages each, spread out across 12 months. When there’s a 30-day waiting period before the next episode, you take more time reading each panel, each text bubble. You absorb the content and let it digest, and you are more appreciative of the pacing. The comic might have been better if it was twice as long, but I doubt many kids would have been able to retain interest for another year, especially considering the game would already be several months old by the end of year one.

Even with the story’s rapid pace, a few original characters were introduced to spice up the mix. In Kakariko Village, Link meets a young boy and the town librarian, both curiously remaining unnamed. They provide Link with modes of flight to get around Hyrule, and once Link enters the Dark World, they continue to offer assistance via a trans-dimensional walkie-talkie of sorts. There’s also Epheremelda, a fairy with a jealous streak and an obvious crush on Link — not unlike Spryte from the cartoon. 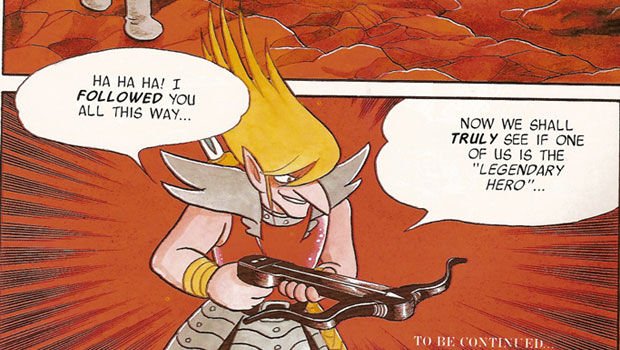 The most notable addition to the cast is Roam, a dead ringer for Jet Link from Cyborg 009. Like Link, he is descended from the Knights of Hyrule and came to the Dark World to kill Ganon. In their first encounter, Roam challenges Link for the right to wield the Master Sword and is soundly defeated. Then he runs off in search of the Silver Arrow in the hopes that it’ll bring about Ganon’s downfall.

Of all the original characters, I feel that Roam added the least to the story. He is introduced as a rival to Link, but there is no reason for his hostility other than the fact that he’s just a stuck-up jerk. His is a role that needed to be given proper motivation and incorporated right from the beginning. Instead, he is introduced very late in the comic and only impacts the story in the penultimate chapter. He doesn’t impede Link’s journey nor does he do anything of worth off-panel. It’s cool that Ishinomori wanted to toss in a reference to his most popular manga, but Roam was a forced inclusion. 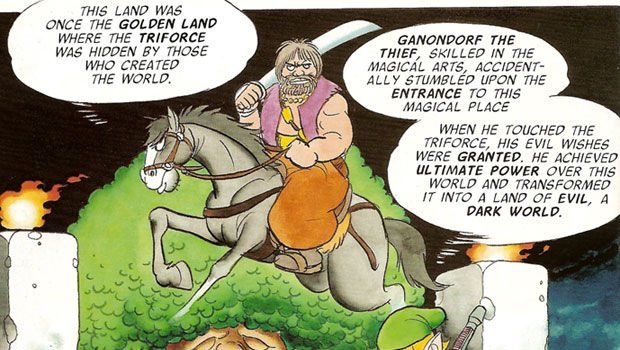 That particular hiccup aside, the comic succeeds at providing an alternate take on the game’s canon. All the stylistic interpretations are a joy to take note of, such as Ganondorf’s human form. I’m pretty certain that this is the first depiction of non-beast Ganon prior to Ocarina of Time. Far from being a dark-skinned man with an air of regality about him, the comic’s Ganondorf extremely brutish in appearance, much more fitting of a desert bandit.

There are wonderful full-page or two-page spreads that can’t be done justice by computer scans and have to be appreciated in physical form. In keeping with that “less is more” ethic, these scenes really grab your focus. From Link’s battle with the Lanmola to his stare-down against Aghanim, from his extraction of the Master Sword to the sight of the bizarre floating sphere that is Ganon’s Tower, each perfectly encapsulates the grandeur of Link’s quest. It’s a daunting world that would overwhelm weaker men with feelings of insignificance, yet Link never strays from his destined path. 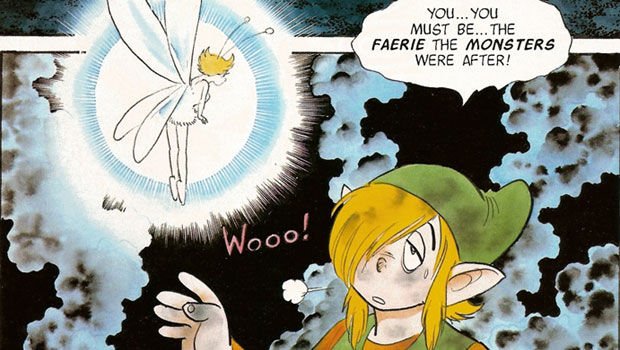 ALttP may be a comic intended for the young readers of Nintendo Power, but behind the characters’ comical reactions and colorful environments is a tale of discovery, struggle, and loss. Ishinomori had this talent of balancing levity and gravity without letting one overtake the other, very much like an animated Disney film. It’s a very subtle technique that only masters of the craft can pull off.

In contrast with the game’s celebratory finale, the comic ends on a heavy, heartbreaking note. Having saved two worlds and won the affections of the princess, Link assumes the position of Master of the Hyrule Knights under the newly appointed Queen Zelda. Unfortunately, their new roles prevent them from following their hearts’ desire. The final image of Link is not of a proud hero with visions of a brighter tomorrow but of a forlorn child who was forced to grow up way too quickly, gained a burden no man should have to bear, and has now lost the only person who could connect with him spiritually. I still fight to hold back the tears. 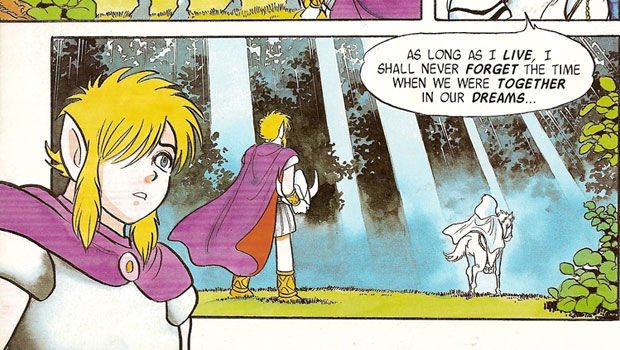 A Link to the Past is a great game, and that greatness is reflected in the pages of this comic. It’s a must-read for Zelda fans and people who love simple, effective, powerful art. I have a copy of the standalone compilation published in 1993, but that can be a little tough to come by at decent price nowadays. Thankfully, you can find scans of the comic all over the net, but there really isn’t anything like holding the pages in your hand and just soaking in the atmosphere.

However, there is another, more recent A Link to the Past manga that can be had on the cheap. Made by the female comic duo Akira Himekawa, it was released to capitalize on the Game Boy Advance port. The artwork is more detailed, though not what I would consider a very distinguishable style. Curiously, most of the events that receive chief focus are the same ones found in Ishinomori’s comic. They even play out in a similar fashion — Link receives the Pendant of Courage directly from Sahasrahla in both, Link turns into a wolfish beast in both Dark Worlds rather than a bunny as in the game, and the depiction of Ganon’s Tower as a spiked moon is identical. There’s even a female thief name Ghanti who is essentially a combination of Epheremelda and Roam, though a bit more fleshed out than either. It makes me wonder if the comic is a legitimate remake, if Nintendo requires adaptations to follow a shared template, or if Akira Himekawa just copied Ishinomori straight up.

In any case, nothing beats the original Nintendo Power comic. Read it and get lost in the adventure.