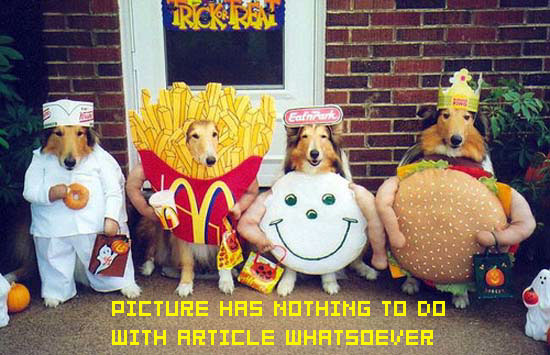 Unfortunately, I’m not serious about the reason for software sales doubling for the month of October, but I can tell you if these dogs approached me on the street and told me to purchase twice the software I usually do, I wouldn’t hesitate. It’s hard to argue a dog in a Krispy Kreme uniform.

Wedbush Morgan analyst Michael Pachter has crunched the numbers with terrifying precision yet again and discovered that October looked pretty darn fantastic, thanks in no small part to the tremendous success of Guitar Hero III. Pachter’s predicted forecast from NPD is $555 million, up from $369 million from October 2006. Guitar Hero raked in $115 million alone in its first week of North American sales.

The word for the year is good too — Pachter predicts software revenue growth at around 19 percent, which would bring the total for the year to a rough 21% increase for software and consoles. The non-math version of this news is that sales look good this year and are beating the pants off whatever crap came out at this time last year.

Most interesting of all is Pachter’s prediction of month-by-month drops in 360 and Wii sales while PS3 sales go up. While it seems obvious due to the recent price cut made by Sony for PS3, a pattern such as this developing could cause a major shift in the balance of the “console war,” giving Sony back some of the power they once had. It’s a more exciting competition to watch than Championship Ping Pong, that’s for sure.