If you’re still playing Oblivion, then I suppose this will be good news for you. Bethesda officially announced today that the game’s first expansion, Shivering Isles, will be coming to Xbox 360 and PC owners this spring. From the press release:

Shivering Isles features more than 30 hours of new gameplay and allows you to explore an entirely new plane of Oblivion – the realm of Sheogorath, the Daedric Prince of Madness. Shivering Isles adds to the existing world of Oblivion so you can continue playing with your existing save game/character, or create an all new character just to explore the new content.

So there you go. Continue to waste more time in your level scaling paradise. I’ll be busy shootin’ fools in the Halo 3 beta at that time. Have fun. More facts after the jump.

Straight from the makers:

DESCRIPTION:
The Elder Scrolls IV: Shivering Isles is the official expansion for Oblivion – the 2006 RPG and Game of the Year. It features more than 30 hours of new gameplay as you are sent to explore an entirely new plane of Oblivion – the realm of Sheogorath, the Daedric Prince of Madness. Shivering Isles adds to the existing world of Oblivion, so you can continue playing with your existing save game/character, or create an all new character just to explore the new content in Shivering Isles. New creatures, weapons, armor, ingredients, branching questlines, and more await in the land of Mania and Dementia.

STORYLINE:
Enter the world of the Madgod – the Realm of Sheogorath.  Inside this torn plane reside the sublimely creative and the completely psychotic. Something is happening to the Shivering Isles and Sheogorath himself looks to you to be his champion and defend his realm and its inhabitants from destruction. Do you have the strength to survive his trials, to tame a realm fraught with paranoia and despair, and wear the mantle of a God?

KEY FEATURES:
See a world created in Sheogorath’s own image, one divided between Mania and Dementia and unlike anything you’ve experienced in Oblivion.
Battle the denizens of Shivering Isles, a land filled with hideous insects, Flesh Atronachs, skeletal Shambles, amphibeous Grummites, and many more.
Find and wield new weapons and armor, or have new ones forged for you by the talented craftsmen of Crucible and Bliss.
Explore a bizarre landscape filled with twisting, vast dungeons buried within the roots of the trees themselves.
Unravel the mystery surrounding the endless cycle of madness and destruction that threatens to destroy the Shivering Isles. 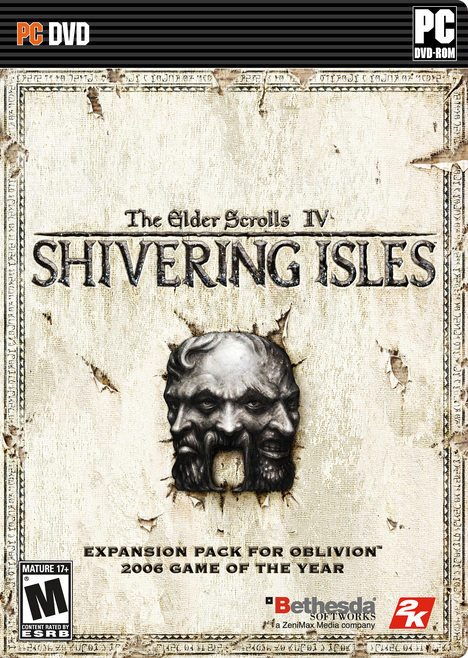 When will Shivering Isles be available?
The worldwide release will be this Spring. We’ll announce the specific release date as we get closer to release.

Will localized versions be available?
Yes, it will be localized into French, German, Italian, and Spanish

Is this just another gate to Oblivion like the ones in the main quest?
No. Oblivion is made of lots of planes, one for each Daedric Prince. Oblivion featured the fiery realm of Mehrunes Dagon. The Shivering Isles is the realm of Sheogorath, the Daedric Prince of Madness. It’s a place unlike anything you’ve seen in Oblivion.

How many hours of gameplay should I expect?
About 30 hours of new content, including an all new main quest — in addition to miscellaneous quests you can complete, lots of landscape to explore, dungeons to discover, etc.