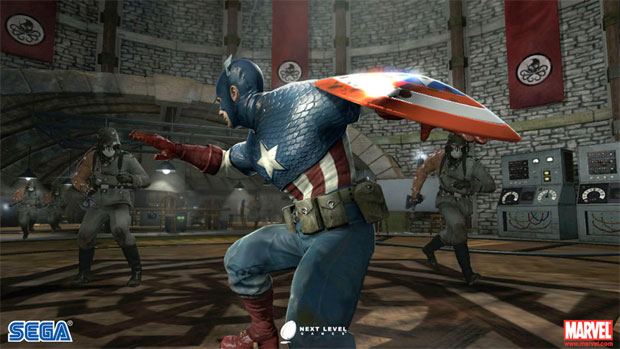 Next summer, Marvel’s Star-Spangled Avenger, Captain America, will hit the screen once again with actor Chris Evans donning the red, white, and blue. Marvel hopes that if 20 years couldn’t erase the memory of the Cap’s straight-to-video disaster of the 1990s, this next big-budget flick — called Captain America: The First Avenger — will.

Sega, along with help from the (ironically) Canadian developer Next Level Games, hopes to capitalize on the hype of the picture with its third-person action title, Captain America: Super Soldier. The game was officially revealed this week for New York Comic-Con, with folks getting their first look at the game in action. Next Level Games’ Brandon Gill, the game’s lead designer, was kind enough to give me a walkthrough of an early, hands-off demo of the game, which ships next year. 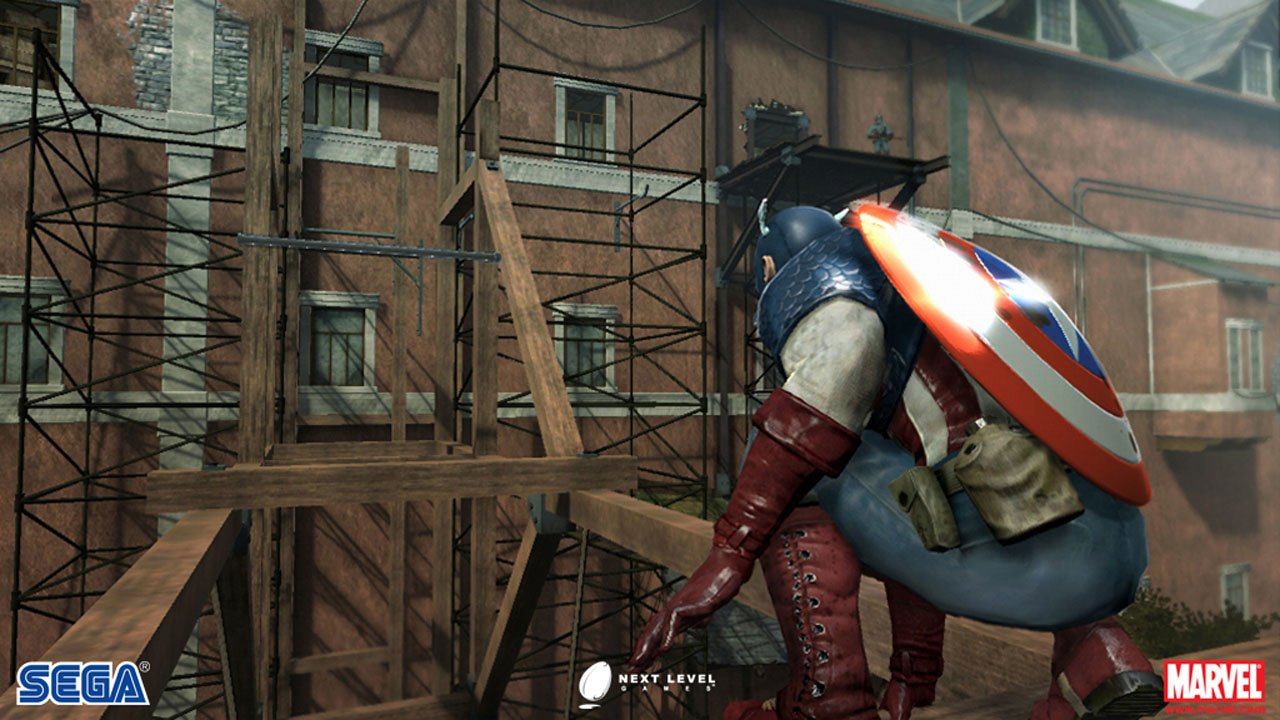 First thing that should be clear is that this isn’t a movie game per se. Sure, while Sega has yet to lock down a release date for the title, it’s likely Super Soldier will hit shelves very close to the film’s summer 2011 release. And yeah, in the demo they showed off, that definitely looked like Evans under the Cap’s mask.

But given gaming’s history with poor film-to-game adaptation, Sega’s making it a point to mention that Super Soldier will feature its own unique story, penned by noted comic writer, Christos Gage. The story will take place during World War II, with Captain America facing off against the nefarious Red Skull and his army. The line here, as it is with many of these “it’s not a movie game” PR messages these days, is that it exists in the same world as the movie, but expect a completely independent story written specifically for the title.

Vague story points and disclaimers aside, Super Soldier is a third-person action game at its core. Engineered to the perfect soldier and acrobat, Captain America is all about kicking ass and monkey-ing all over the game’s environment, a mysterious castle fortress operated by international terrorist organization HYDRA. 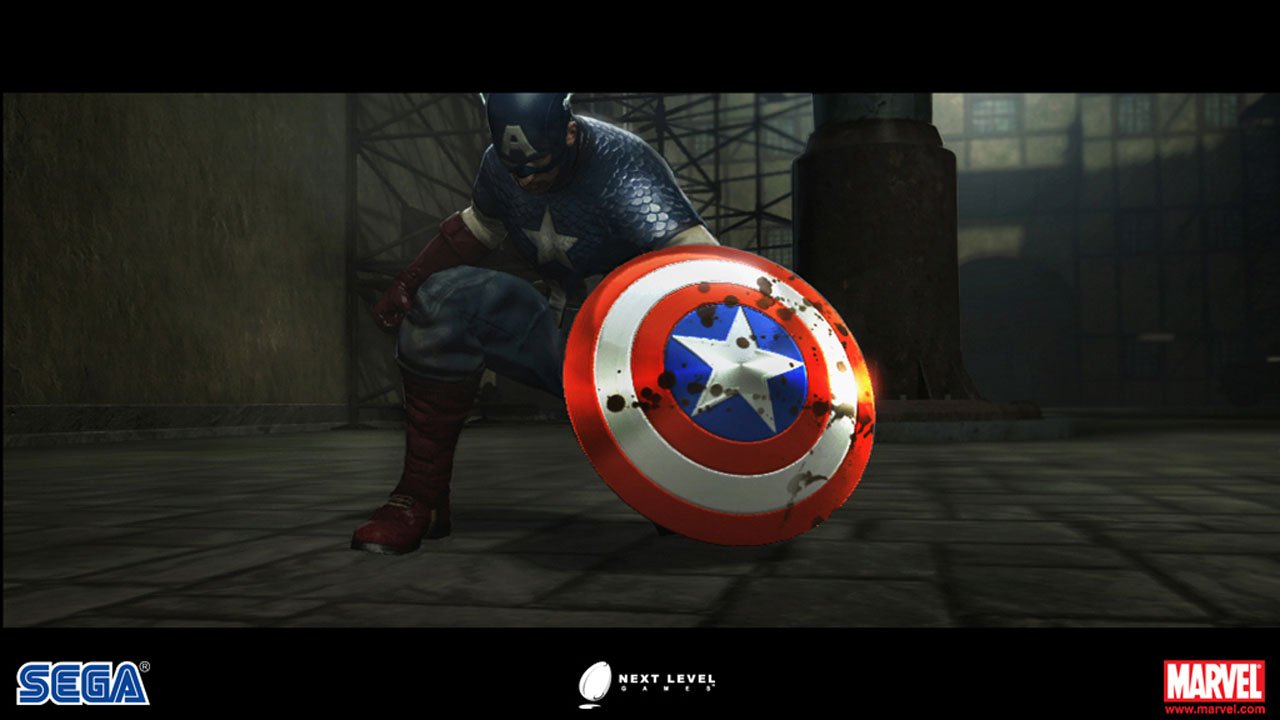 From a combat standpoint, Gill admits a bit of a Batman: Arkham Asylum influence — Captain America can attack in 360 degrees, with the player simply pushing the analog stick in the direction of an enemy, and hit the strike button to execute an attack. Simply put, the action is less button-mashy and more rhythm-based.

“We did a lot of tests with what kind of fight system we wanted,” he tells me. “We started off with that Devil May Cry feel, but we wanted something grounded and strong, rather than something that’s kind of twitch-based. So you’ve got to think; it’s a little more tactical.”

Cap can also do something called an offensive grab, which staggers an enemy, setting them up for a contextual attack. These contextual strikes, I’m told, will vary depending on the situation — a knee to the stomach, or a roundhouse punch followed by a jump kick, for instance. These contextual blows will drop an enemy, leaving them vulnerable to a ground attack. If you thought Captain America was above mounting a downed foe and repeatedly striking them behind the skull, you were sorely mistaken.

There’s also a special set of attacks tied to an in-game meter called the “Crippling Strike.” Once activated, these one-hit knockout attacks slow down time, the camera shifting to a more cinematic perspective to get a view of action. I only saw one in the demo, a well-placed knuckle sandwich on the chin of a HYDRA operative. Gill says to expect variety in the “Crippling Strike” animations, once the games ships, to avoid repetition. 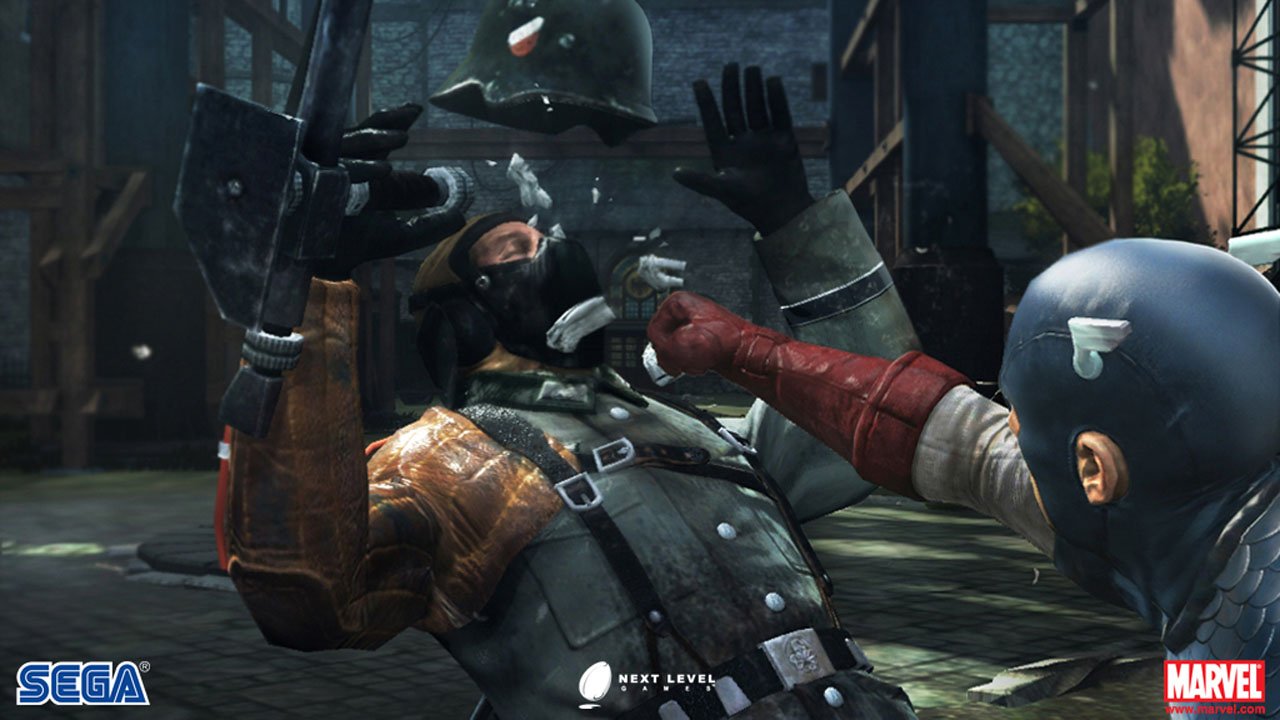 Defensively, Cap can actually use his offensive grab technique to counter enemy strikes, leaving them vulnerable. If you’re feeling saucy, you can flip or roll out of the way, as well. This also happens to be a great way to get behind enemies, for a contextual rear assault.

There’s also that matter of the iconic shield, and of course Next Level Games has implemented it into the gameplay. The shield can be tossed at in-game objects (like hitting a switch, for instance), as well as used for a ranged attack. Gill had Cap toss the shield into a crowd, and I watched as it bounced off several soldiers before returning to its rightful owner. It can also be used to deflect bullets from any angle, even if an enemy has fired at you from off camera. The screen will flash to indicate a bullet is incoming, and a simple well-timed tap of the button will return the slug to its sender.

Captain America will exhibit some of his gymnastic talents in the game as well, with a rhythm-based platforming system reminiscent of Ninja Theory’s Enslaved. For instance, simply mashing the button will have Cap swinging pole from pole, it just won’t be particularly graceful. Such random pressing will lead to slow, sloppy movements. Time it right, however, and you’ll get a much faster, more fluid set of animations. I saw one notably cool bit where Cap did a back flip out of a wall run before quickly gripping and swinging around a pole.

Being an early demo, Super Soldier lacked a lot of the visual polish you’d expect from a next-gen title. (The game was being played on an Xbox 360, but PlayStation 3, Wii, Nintendo DS, and PlayStation Portable games are in the works.) But the foundation for a fun platforming and combat experience is there. And with Gage — a writer who has proven that he knows the character and can write him into compelling fiction — on board, there’s hope that Captain fans are in for a treat.