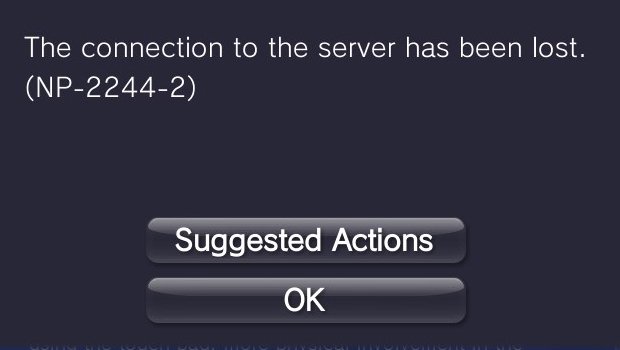 The PlayStation Vita has been quite lucky enough to launch without talk of any major hardware disasters, and it seems to be working fine by most accounts. However, an error has been cropping up that’s managed to piss a fair few people off — NP-2244-2.

This code accompanies a message that reads, “The connection to the server has been lost,” when attempting to access the PlayStation Store. Once the error occurs, most users find it incredibly difficult to get back into the Store without encountering it. It’s stopping a significant number of users from purchasing content.

I’ve encountered this error myself, and judging from similar experiences, NP-2244-2 seems most likely to occur when you’re downloading multiple items at once. While attempting to download a Rayman: Origins demo and Big Trouble In Little China at the same time, I found I couldn’t browse the store for any more games. One of our readers, Alex, had bought four games at once, then found himself locked out of the Store as if it were a barkeep telling him he’d had enough.

One suggested solution is to clear all billing data, although currently there’s little evidence that it’s been working for people.

A quick search for the error code on Twitter reveals a lot of Vita users complaining about it, and sharing frustration that Sony has not commented. Some have even stated that they’ve been locked out for days. I’ve contacted Sony asking for details on the error, and hopefully there’s a solution in the works. Destructoid will fill you in when Sony has more to say.