60 frames-per-second put a Christmas in your eyes

DmC: Devil May Cry has been out for a while, and I think everybody’s said what they need to say about it. Whether you’re a supporter of the game, a hater of the game, or you were busy making up stories about human babies being shot in the game to have an opinion, it’s out now, and everybody’s had their say.

As is so often the case, the PC version of the game has not received quite so much press, despite being, in several ways, the version most worth checking out. Fortunately, we gave this forgotten, recently released alternative a try, and can confirm it’s definitely got a few things over on its more widely marketed console brethren. 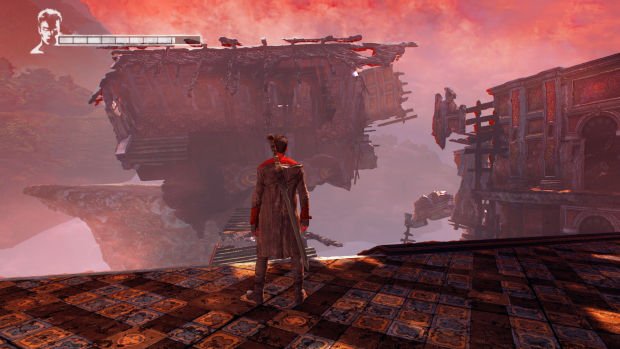 DmC: Devil May Cry initially suffers from the same thing so many major PC releases seem to suffer from these days — a visually repugnant opening cutscene. Cutscenes are poorly compressed and afflicted with an offputing overabundance of screen tearing, as seems to be the way with most big PC titles (Note: Enabling VSync also applies to cutscenes and will stop the screen tearing — thanks readers!). I really wish they’d sort that out, especially given the PC’s reputation as the home of superior visual quality. It’s always a terrible first impression for any game to give off.

Fortunately, the cutscenes are anomalous to the overall package, which looks absolutely stellar and sits comfortably above the console releases in terms of raw graphical splendor. The PC version boasts a greater draw distance and high definition shadows to craft a world that’s far easier to get absorbed into. With enhanced textures thrown into the mix, this game is an eye-popping revelation to anybody who’s just got done playing through the console alternative. 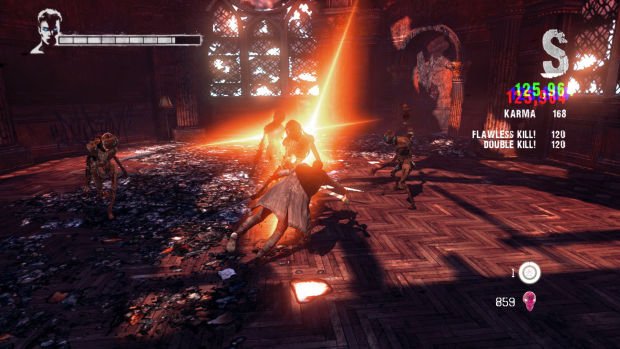 Of course, the most significant attraction is the framerate. While the 30 frames-per-second found on Xbox 360 and PS3 were a huge sticking point in the minds of concerned Devil May Cry fans, such a problem is non-existent on this 60fps option. Those lamenting the lost of half the framerate will get exactly what they want here — a game with silky fluidity and a greater level of precision.

These factors combine give us a game that just feels much more tangible. I’ve played a fair few PC versions of games after originally taking them for a spin on consoles, and DmC is definitely at the higher end of the noticeable improvement scale. The game really “pops” off the screen in a way the Xbox 360 version simply can’t. Of course, if you’re a PC gamer, you knew that already and are just here looking for validation — consider it done!

The biggest caveat has to be that you’re likely going to want an actual controller, as opposed to mouse-and-keyboard. I’m not a fan of third-person action titles with traditional PC controls at the best of times, but DmC‘s reliance on multiple button presses during the heat of combat makes it almost unplayable in my experience. When you’re holding down multiple keys to switch Dante’s weapons, hitting Shift to dodge, and trying to keep Dante pointed in the right direction, all with one hand, it’s an exercise in total frustration. Not to mention, an analog stick is always going to be better than keys for nailing direction-based combos. 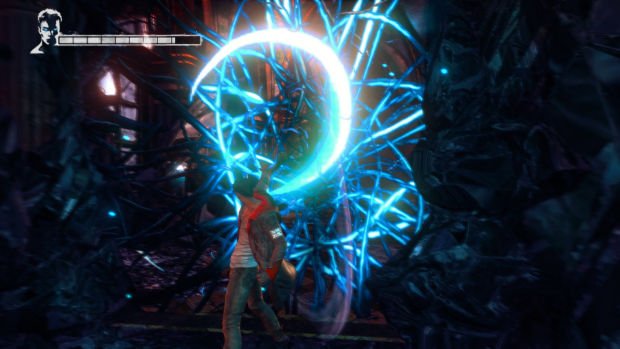 One other complaint, also linked to mouse-and-keyboard, is the menu system, which is not at all optimized for PC controls. You can’t use your mouse in menus, which isn’t a problem if you take my advice and use a controller, but is an annoyance for anybody forging ahead with the usual input method. The game has most certainly been designed with controllers in mind, and the PC version is not prepared to make allowances for anything else.

In my humble opinion, the game’s still a great time no matter what system you acquire it for, but if you want the best visuals and a framerate worthy of the franchise, DmC on PC is the way to go. Its cutscenes are as bad as can be expected, and keyboard input is a dog’s mess of an experience, but if you’ve got a controller and an eye that demands the best visuals possible, this is the DmC you need.