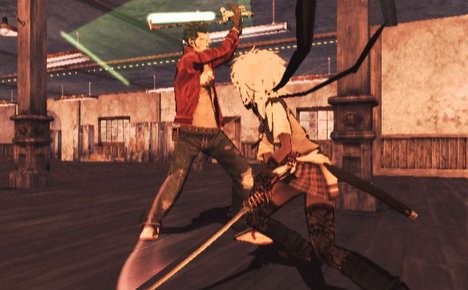 In a time where there are so many games with utterly realistic high-definition graphics, it’s nice to see the occasional title that brings forth a different kind of style. One such game is No More Heroes. Not only is it visually appealing, but it also promises to be one of the most violent Wii games … ever!

The director of No More Heroes, Goichi Suda (aka Suda 51), recently sat down with IGN and talked about his pride and joy:

The story begins when Travis is ranked at the eleventh place of the killer association by an unexpected coincidence. Travis is now a qualified assassin on this ranking list, and aims to become the ultimate, strongest assassins of all.

No More Heroes is not an “on-rails”-style adventure game. It is a free running/roaming style action game.

I’ll also try my best to make No More Heroes as violent, or even more violent than Manhunt 2!

We can only hope that Suda 51’s goal of ultimate violence doesn’t somehow overshadow other important aspects of No More Heroes. But looking at his previous games, this shouldn’t be much of an issue.