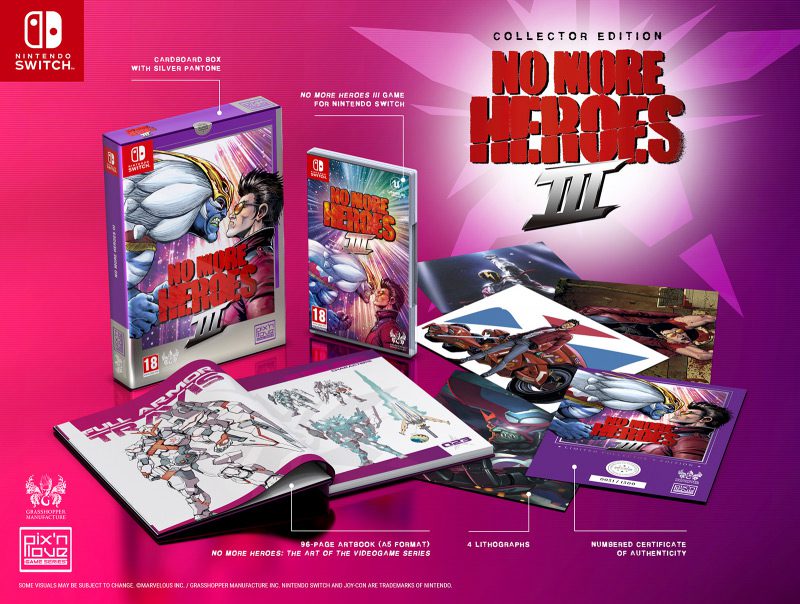 Another Touchdown for Travis

[Update: Pix ‘N Love will be restocking the Collector Edition and the Deluxe Edition (which is signed by Suda51 himself, and sold out in minutes last time) of No More Hereos 3 on Wednesday, July 21, 16:00 (UK time). if you want a second shot at either of these sets, get the site bookmarked and get ready to click as fast as you can! Purchasing either one is sure to be a desperate struggle.)

There are also hints that No More Heroes 3 will cross over with Killer 7, another one of Grasshopper’s rabidly-adored titles. Yesterday, the official site for the game revealed that the text adventure stories from Travis Strikes Again will continue into this new game. One screen from this decidedly retro mode strongly hints at an appearance from  Killer 7‘s Young Harman Smith. It’s a stretch, given that we just have this one screen to go on, but this wouldn’t actually be the first time the two games crossed paths. It’s also worth noting that the prior text adventures for Travis featured appearances from both Dracula and Epona (from the Zelda series). In the same scene. So again, anything’s possible.

The only thing we know for sure is, the time for this kind of fanciful speculation is almost over. No More Heroes 3 launches next month, and just like with No More Heroes 1, 2, and The Silver Case 2425, it’s getting a physical collector’s edition, this time from Pix ‘N Love. I have to guess that they waited to announce this package until those other special editions from Grasshopper had been delivered. By the looks of it, the timing was perfect. The site actually went down from excessive traffic earlier in the day. It’s back up now, so I’d jump on the chance to check it out while you can.

This collector’s edition comes with a 96-page art book, four lithographs, and a cardboard sleeve, and wouldn’t you know it, they’re only making 2,000 of them. History has shown that this artbook may end up being the rare first appearance of a new character that will end up being an important boss in some future Grasshopper title, so Grasshopper fans like myself have basically two choices here: buy now or fear missing out.

I bet you can guess which one I picked.