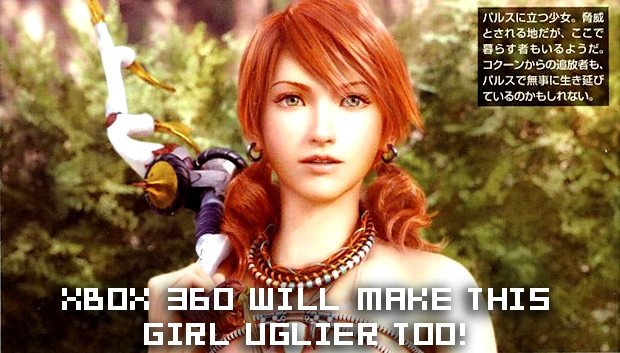 Oh no! Everybody said that Final Fantasy XIII coming to the Xbox 360 would ruin the game because only Blu-ray could handle it, and it’s all coming true! In a recent Q&A session, producer Yoshinori Kitase has revealed that the game might not ship with a Japanese voice track when it hits the US, because the Xbox 360 is rubbish and wrong. The prophecy of PS3 fans has been made flesh!

“Obviously, when we talk about XIII it’s for PS3 and Xbox — with PS3 being on Blu-ray there would be enough memory, but on Xbox probably not.” explained Kitase, confirming everybody’s worst fears. “At the moment we’re thinking of releasing the voice in English only. Are there many people who would like to play with Japanese voices?”

Well, that’s Final Fantasy XIII absolutely wrecked. Once again, the Xbox 360 has destroyed gaming by not indulging those pretentious people who only listen to Japanese voice tracks and pretend they’re better, even though all the women sound like screaming three year olds in them and are ten times more annoying.

The PS3 fans were right all along. FF XIII going multiplatform has killed it, and MGS4 would need to be shipped on ten thousand DVDs if it ever went to the 360. It’s all true, and we didn’t listen!