While I was at home playing Gears of War 2, and Colette and Mr. Destructoid were hitting up midnight launches in Florida, Destructoid Los Angeles community members were holding it down on the West Coast.

Universal City Walk in Los Angeles was the place to be for fans of Gears of War last night, the home-base for the biggest of the nationwide Gears of War 2 launches. Tons of videogame industry folks were on hand (including Microsoft’s Major Nelson and Epic’s Cliff Bleszinski), as well as celebrities like those two dudes from Chuck, who seem to be contractually obligated to appear at every videogame event in the Los Angeles area.

But that’s just what I hear. Like I said, I was home. Hit the jump for Dexter’s first-hand account of the event, and be sure to check out the visuals in the gallery, courtesy of Charlie Suh.

As you probably know, Gears of War 2 released today worldwide.  Several retailers opted for midnight launches, but at Universal City Walk in Los Angeles, Destructoid attended the midnight launch.  Over a thousand were in attendance, and for good reason.  Not only were they selling the game alongside the usual extra merchandise, but they also had several of the game’s voice actors and its design director, Cliff Bleszinski.

While the night began on a relatively quiet note, with gamers mulling around in line and in a mosh pit area in front of the stage (no actual moshing occurred), at around 10:00 PM Major Nelson got up on stage to get the festivities started.  He began by selecting random audience members to be among the first to play Gears 2.  After introducing themselves, they were sent inside, and the voice cast was brought out to play against the ragtag team of audience members.

The stage soon filled over capacity with the voice talent from the game, including the voices of Cole, Baird, Dom, Anya, Hoffman, Carmine, Locusts, and finally Marcus Fenix.  With Major Nelson and Cliff Bleszinski, there were so many people on stage that the game had to be played in turns.  At some point during this segment, Carlos Ferro (voice of Dominic Santiago) realized that the big screen was only showing a camera filming the stage, and that the audience was essentially just watching people holding controllers and talking about how cool the game was. 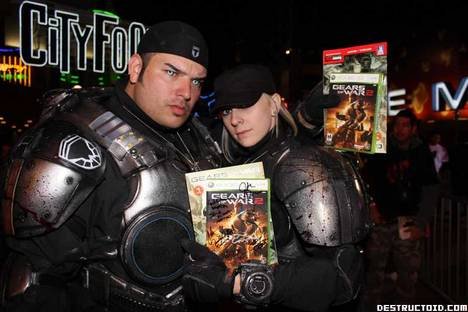 After the actors were beaten three matches to zero, Major Nelson started giving out prizes to people who could answer Gears of War trivia.  The prizes ranged from Zunes to a Gears branded XBox 360.

Soon enough, the countdown to midnight began, and the EB Games started letting people in to redeem their preorders, five at a time.  Cliff and the voice actors for the major characters in the game remained on hand to sign copies of the game for the first few hundred customers.  Given the sheer volume of people at the event, sales didn’t end until just before two in the morning, by which point the EB Games staff seemed thoroughly exhausted, and none of the Internet celebrities could be found.

All in all, it was a pretty fun time.  It was certainly the most entertaining midnight launch I have ever attended. But then again, it doesn’t take much to improve on standing in line in the cold in front of a game store waiting for the clock to hit midnight.