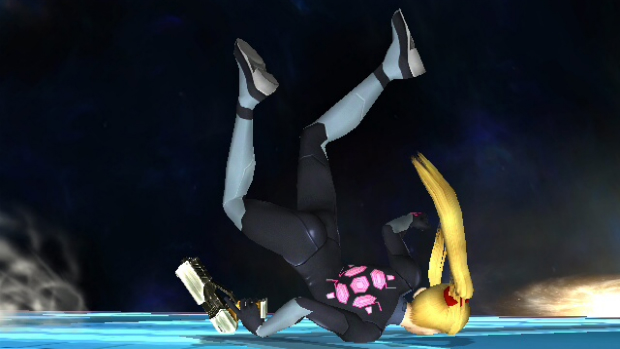 [Continuing our ’round the clock Super Smash Bros. coverage, here’s a wonderful rebuttal to Jonathan Holmes’ recent “tripping” piece from the creator of Soundodger+! I love promoting differing opinions, so if you have something to share yourself, go write something! –Mr Andy Dixon]

Super Smash Bros. is a series that’s near and dear to my heart, a franchise I’ve put more time into than any other. It’s the series that gathered friends on N64 long after Goldeneye‘s Facility grew stale. It’s the series that brought friends together each weekend during highschool, where items were on MAX and Poké Floats was on the Random Select list. It was also the series that made me lose contact with various friends in college as I learned about advanced techniques, competitive play, and became obsessed with achieving total control.

My dorm in general became a hub for advanced play in Melee, as the four of us would play for hours every day (for years), perfecting the wavedash, dissecting the SHFFL, and learning when to edge tech (“you know that moment before you think you should tech? It’s the moment before that.”). There used to be a large family of casual and more advanced players, but once we went in the deep end, two camps were solidly formed. Some joined our side, while others stayed behind with their… items… and free-for-alls.

We stayed separate. Our discussion circles talked of wildly different stories, albeit from the same game. It wasn’t until Brawl came out that we found ourselves together again, standing in line at the game’s midnight launch at our local GameStop. We came back to the dorms, played free-for-alls with items on, Smash Balls galore, the works. We soaked ourselves in the experience Sakurai designed for us. After a few hours, people turned in for the night, never to rejoin our side again.

Our dorm henceforth became a battle center, with analysis of changes to mechanics, physics, controls, etc. We poured countless hours into research on how to make Brawl fun. After two months, we reached our conclusion.

Brawl was ejected from the Wii.

Fun was had again. And by “fun”, I mean our dorm became a place of high-stress, unnecessary yelling, and overall negativity toward one another, even when we were just messing around. For some reason we thrived on this idea of total control, to be able to have our characters do exactly as we intended, in exchange for hypothetical ulcers and frowny times.

Just what was changed in Brawl that made us quit within a couple months? It’s the same thing anyone will tell you: physics and tripping. The physics became floatier, which broke the rock-paper-scissors balance. In Melee: blocks trump attacks, attacks trump grabs, and grabs trump blocks. It’s a beautiful cycle that allows punishing, improvisation, and usually some comboing. The floatiness in Brawl breaks this chain, as you can’t combo anymore from a grab (with few exceptions). The poke-wait-combo tactic in Melee simply becomes a game of poke-until-death in Brawl.

And then there’s tripping. I’ve never seen a single mechanic in a game that divided a community as harshly as tripping has. In Brawl, you have a % chance of tripping upon dashing or certain attacks, which in turn forces your character to flop onto the ground and suffer a little vulnerability. Some people applaud its randomness that evens the skill gap, while others condemn it for introducing an uncontrollable element. I’m among the loathers of tripping, not just because it prevents achieving total control, but because it can never be fully avoided.

If you ask people what their favorite hardest game is, you’ll get a bunch of answers — Dark Souls, Super Meat Boy, VVVVVV, Spelunky, etc. — but they’ll always add an additional comment: “I love how whenever I lose, I only blame myself and not the game.” If you start playing a known-to-be-hard game that suddenly takes control away from you, the whole vision of one day mastering that game becomes a bit less motivating.

Take for example the jars in Spelunky that usually have treasure inside of them, but every once in a while contain a snake or something that pops out and damages you. That’s super sneaky! But it’s not unfair, because it can be avoided. You simply learn to whip jars from a distance or throw them in order to see their contents. Such a strategy for avoiding tripping in Brawl does not exist.

I would like to think that tripping is in Melee, except it’s only initiated by bad inputs from the player. In that sense I’ve tripped thousands of times in Melee. I’ve missed critical moments because my character failed to do the thing I intended to do. And it was always my fault. In Brawl, that critical and unpredictable error is now being determined by the game, on top of your own fumbling fingers.

As someone who lost his happy thought for how to enjoy casual Smash Bros., I can at least peek through the window and say tripping is welcome in a casual environment. It’s no different than the crapshoot of a Pokeball. It’s fun when it happens, as plans are halted to make way for impromptu punishments. However, in a competitive scenario, it’s an element of helplessness that prevents a fair assessment of a player’s skills. This isn’t because the tripper’s plans have been cancelled, but because a less-skilled combatant can come in and clean up, placing higher in a tournament, while earning no additional respect (which has happened).

To echo Jonathan Holmes, the tripping issue could be solved by simply having a slider: “none, some, a lot”. This would allow people to just turn it off if it bothers them. As for the physics issue, which I think is far more off-putting, there’s always Project M or good ole Melee. I’ll of course be picking up Smash 4, especially after the relatively good experience I had with it at E3. At least Sakurai and company have a special online mode just for control freaks like me – where items are off, the stage is flat, and everyone can fairly and deservedly earn their shiny golden ulcers.