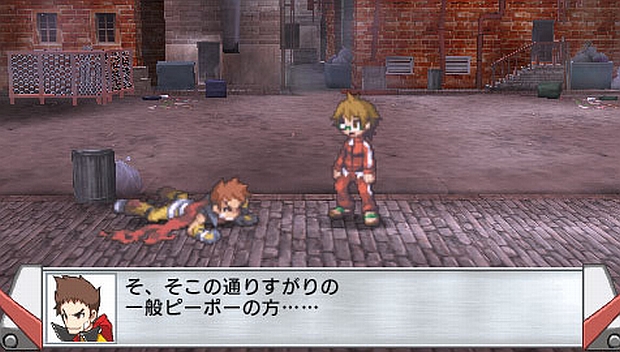 The reasoning behind this modest claim lies in the ability to customize your hero’s equipment, abilities and statistics in a ridiculous number of ways, exploring randomly generated maps infested with enemies, deadly traps and an insane sense of humor.

The hero “Absolutely Victorious Make-Ranger,” was run over by a car on his way to fight the Last Boss, “Demon General Mr. Tanaka DEATH-DARK!!!” You, the protagonist, happened to be buying groceries nearby, were thus selected to inherit the mantle, and the duty to defeat the Demon General. Of course, you’ll need to undergo a lot of special training by crawling through a series of randomly generated, isometric-perspective dungeons infested with monsters.

Thankfully, you’ve got myriad pieces of equipment, including handguns, lances, swords, drill arms, tank legs, gatling guns, extendo-claws, cat ears, Prinny hats, angel halos, chonmage, and other such things in your arsenal. That, combined with a fully customizable stat grid and hideout, should help you grasp victory without too many deaths.

Anime fans will also be delighted to know that several anime characters (and their signature weapons), will be making appearances, including Taiga of Toradora!, Dokuro-chan from Bludgeoning Angel Dokuro-chan, Shana from Shakugan no Shana, and Spice & Wolf‘s Holo. Are you reading this, Brad Rice? Taiga is in this game.

The game is out on March 11th in Japan, and so far there hasn’t been word on an English release, but you can check some screenshots and a trailer narrated by the wonderful lisp of Norio Wakamoto below.

This is a dungeon RPG from the makers of Disgaea [Siliconera]