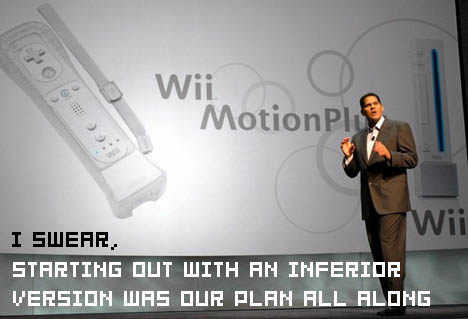 Destructoid editors manned a good chunk of a center row pretty close to the stage this year at Nintendo’s E3 presentation. We could even see Cammie’s teleprompter eyes. When the Wii MotionPlus perpherial was finally announced on stage, we all looked at each other as if to say another Nintendo add-on? Great. Superb.

Nintendo’s Reggie Fils-Aime said that the MotionPlus was a planned addition from the start. He explained in an interview with VentureBeat that they were aware of the technology back when the Wii was originally designed. They say that it was just that the cost was too high for the business model, so they held off.

“By waiting about three years, the costs come down substantially and it becomes a viable product,” said Fils-Aime.

I don’t know if I believe that. From the product showing we saw at E3, the games did not look like titles that came from 3 years of knowledge about the perpherial. And we’ve heard that some of the third-party developers were taken by surprise at E3.

Was it really so expensive that they couldn’t add it on in the first place? Edge points out that Nintendo chief Satoru Iwata said in August, “…The cost of making the Wii Motion Plus is not that much, so I think we can make it very affordable.” Did the price really change that much in 3 years?