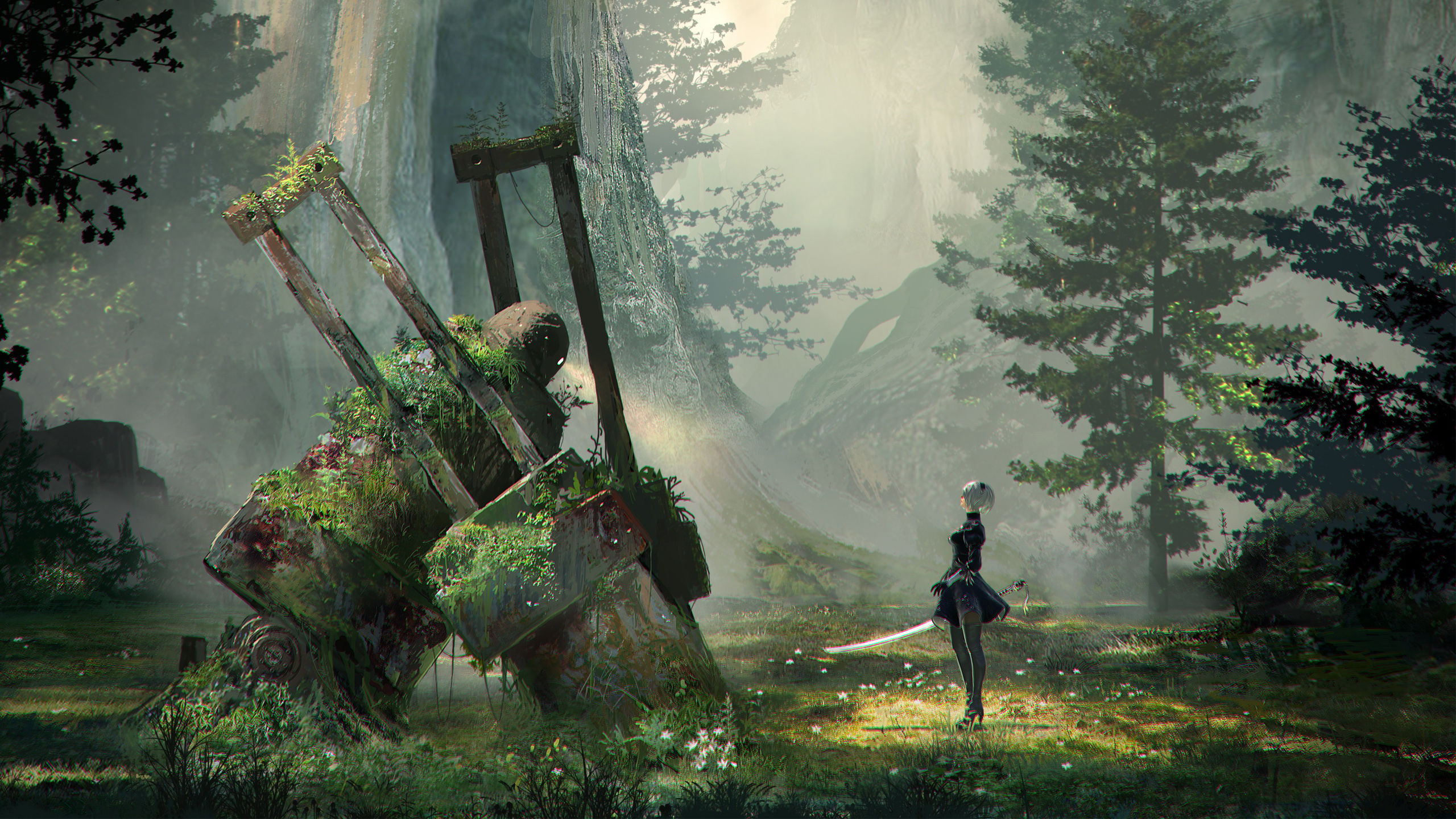 Impressions from the PS4 demo

NieR: Automata is a big deal for me. It’s an action-heavy game from Platinum, devoid of the baggage that comes with its recent deluge of licensed materials that seek a larger audience. In this era where niche products are generally shunned, I’ve been waiting to see a true action game from Platinum since Bayonetta 2.

Automata might shy away from some of the role-playing elements of its predecessor, but more importantly for me, it feels like a real Platinum joint. 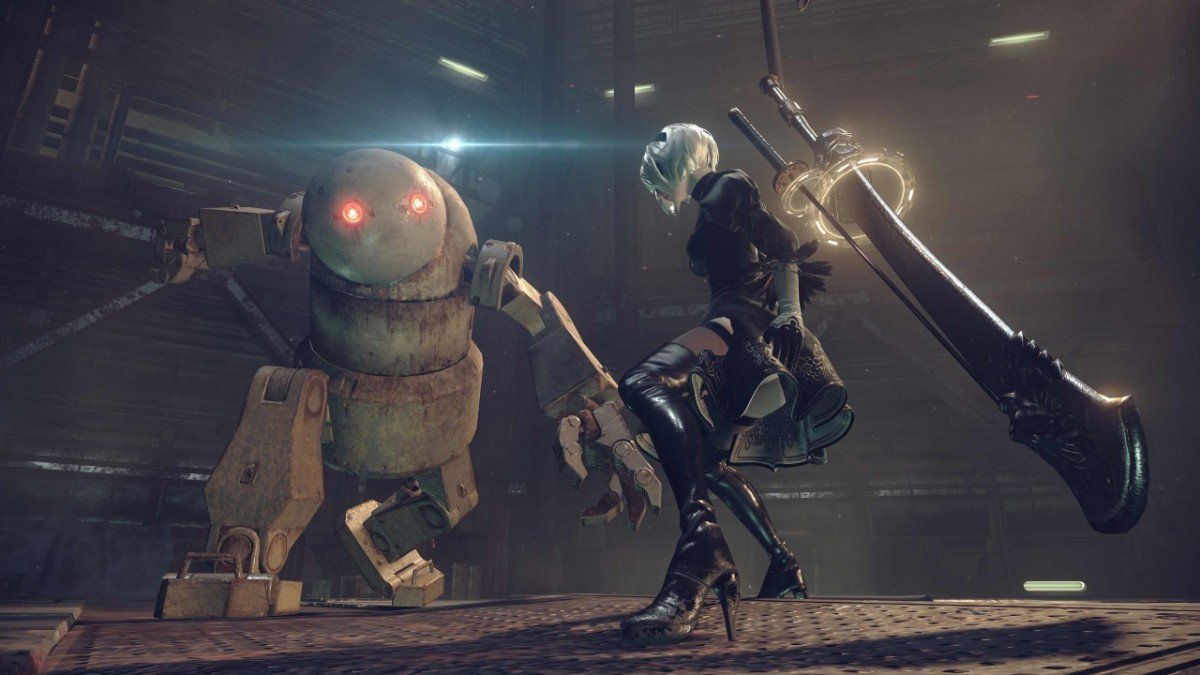 Thrusting you into the role of YoRHa No. 2 Model B (2B), the preview build of NieR: Automata has very little exposition. A short text intro informs the player that they need to enter an abandoned factory to destroy a weapon, and the subtext is basically “kick ass and take names.” There’s an arena battle, followed by a series of linear paths, and a few more arena battles. Automata features a small amount of exploration, but there’s a lot of invisible walls that prevent you from going too crazy. Light platforming, top-down, shoot ’em up, and 2D sections also mix up the linear nature of the roughly 30 minute demo, all of which operate at an amazingly smooth framerate (Platinum is still aiming for 60FPS on normal and Pro PS4s, and as an aside, I could only test this on a standard PS4), sans QTEs (so far at least).

Camera customization has no less than eight options, including inverted horizontal and vertical shifts, as well as the speed for every facet of the experience, including distance and zoom speed. Japanese and English audio is available from the get-go, and you can remove any portion of the HUD by messing around with the game’s skill (chip) system. Speaking of chips, there wasn’t much for me to mess around with in the preview build other than those aesthetic changes and rudimentary skills like “automatic healing item use if health is critical.”

The combat system has your typical action conventions, but more of the nuances will take shape the more you grow accustomed to the engine and the way movement works. 2B has weak and strong attacks at her disposal, as well as the ability to fire a machine gun using a floating robot (called a Pod). As well as an offensive tool you’ll sometimes need to diffuse bullets (energy balls, really) with it, and since you can fire it while using melee attacks, it’s imperative to micro-manage both at once (I should also note that you can independently shoot one enemy while combing another with melee attacks, which is dope). The limited amount of items I’ve had access to are reminiscent of Bayonetta too, with small supplements like healing powders and 15-second damage buffs (which come in handy for bosses). There’s also some juggling of junk or barter-centric items like ore, and the power to customize two weapon sets (you start with two blades: one a light katana, and the other a heavy sword).

Dodging is very floaty, and almost feels like a slide, which I dig because you can use it while running, and you’ll reset back to a smooth running animation a second later. It takes some getting used to, as it’s definitely not a catch-all iFrame-heavy win button, especially on higher difficulties. Instead you’ll have to rely on your awareness of the battlefield, especially for larger enemies that encompass more room than you can possibly dodge. The double jump comes in handy too, particularly after holding down the button, as it allows your robot to grab you and let you glide for a moment. Oh, and the dodge doubles as a parry of sorts if used right before an enemy strike, just like Witch Time.

So far my main concern is how weird the ranged combat feels from the perspective of the enemies. It’s clear they’re trying to incorporate shoot-’em-up elements in Automata, but enemy bullets not only look cheap, but have a standard, slow-moving homing pattern. I get that Platinum wanted a uniform feel to bullets so the action wasn’t too hectic, but their large design and speed don’t make them very formidable, even when they fill the screen. They also kind of just appear out of the enemy model inorganically. I hope this aspect is smoothed out eventually. It doesn’t break anything, but definitely seems like a half-measure given the sleekness of the other combat animations. The lock-on feature also feels too loose, and it isn’t apparent what’s being locked-on to at any given moment because the indicator is so small. That definitely doesn’t feel broken though, because it’s meant to be a stopgap solution anyway given how the difficulty settings work (it’s not even available past hard).

The difficulty options in the demo itself (and likely, the full game) are fantastic. You have easy, which makes enemies less powerful, and also allows players the option to equip automatic combo chips if they so choose. Then there’s the standard normal, followed by hard, which buffs enemy damage and removes the lock-on feature, and very hard, where players die in one hit. Given the sheer amount of mobility you have the latter isn’t insurmountable, and reminds me of classic challenges like Heaven or Hell (and Hell And Hell) in Devil May Cry.

Even with just a taste, it’s clear Automata is the real deal. There’s intel data on each enemy, including a 3D model gallery and a short backstory, which is just one of the ways that Platinum has attempted to flesh out the world it’s creating. As Square Enix has said all along (and tried to emphasize by saying that this iteration isn’t directly connected to past Drakengard games in a narrative sense, but more thematically), this is more of a standalone action game, so it’ll be easy to jump in even if you haven’t played any prior works.

You can try out the demo on PS4 for yourself on December 22. NieR: Automata will be released in March 2017 in the west, with a PC port coming sometime next year.