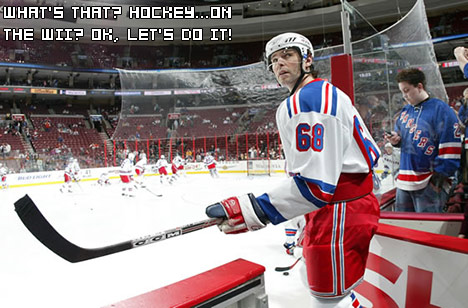 Attention, bleep: your prayers (see eighth comment) have been answered. Today, 2K Sports announced that they will be releasing NHL 2K9 on the Wii this year. It will be the first officially licensed hockey videogame on the Wii, so all you Wii owners who have been waiting so patiently for this can stop complaining (not that the complaints weren’t warranted, of course).

The press release (after the jump) mentions that you’ll be able to “play like the pros using the Wii Remote™ controller as a hockey stick,” and that certainly sounds exciting. Apparently, the Wiimote will be used to control face-offs and shots. The most heartening news of all is that the Wii version won’t be dumbed down; 2K President Christoph Hartmann promises that the game will have “the full feature set as available on other platforms.”

I just feel sad for Wii owners because EA isn’t putting out NHL 09 on the Wii (at least, they haven’t said anything about a Wii version yet). The general consensus last year was that EA’s game blew 2K’s effort out of the water, so if that trend continues this year, Wii owners will be stuck with an inferior game as their only hockey option. Of course, that’s something like the Sony-exclusive baseball game MLB 08: The Show — I feel so bad that people who don’t own a PS3, PS2, or PSP are forced to play MLB 2K8.

Anyway 2K has sent along the cover artwork (featuring Rick Nash) for the game’s four platforms (PS3, 360, Wii, PS2); you can view them in the gallery below. NHL 2K9 will be out this fall.

New York, NY – June 12, 2008 – 2K Sports, the sports publishing label of Take-Two Interactive Software, Inc. (NASDAQ: TTWO), today announced that the next iteration of the popular hockey franchise, NHL 2K9, will be coming to the Wii™ console from Nintendo this fall. As the first and only officially licensed NHL and NHLPA video game for Wii, NHL 2K9 will offer fans the fun opportunity to play like the pros using the Wii Remote™ controller as a hockey stick, and enjoy playing hockey in a wholly unique and entertaining experience like never before.

“Nintendo is thrilled to have 2K Sports’ NHL 2K9 on the Wii platform this season,” said Steve Singer, VP of Licensing at Nintendo of America Inc. “This title has been highly anticipated by our Wii consumers who will now be able to use the Wii Remote to face-off, play hockey, and fire a slap shot in their living rooms.”

In celebration of NHL 2K9 for Wii, Nintendo’s most iconic video game character, Mario™, will be walking down the red carpet during the 2008 NHL Awards tonight at the Elgin Theatre, 6:15 p.m. ET in Toronto. Fans in attendance will also have the special opportunity to meet and greet Mario and have their picture taken with him.

“It’s our goal this year to bring the fun back to hockey video games,” said Christoph Hartmann, president of 2K. “NHL 2K9 for Wii includes the full feature set as available on other platforms, and added Wii Remote controls and other exciting features specific for the Wii console will allow dedicated fans the opportunity to fully enjoy and embrace NHL hockey in a brand new experience.”