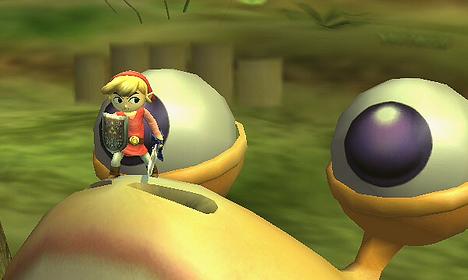 In a recent interview with a Latin American gaming magazine, my BFF Shigeru Miyamoto and Reggie Fils-Aime dropped a few very cryptic hints about the new games in the Zelda and Pikmin franchises.

As for Zelda, Miyamoto says the next Wii installment will be “something special” — unlike Twilight Princess, which was not built with the unique Wii controls in mind. He remains confident that his team will rejuvenate the “stale formula” with a new approach to control and gameplay. Although I am afraid of change when it comes to the Zelda series, if the new Wii Zelda controls even half as well as the glorious (and revolutionary) Phantom Hourglass I am sold!

Another interesting note concerns Pikmin 3, a game quietly announced near the end of this year’s E3. Miyamoto says development is going well and that the Wii controls are working great. Now, maybe I am just not remembering right, but when Miyamoto confirmed this new Pikmin game a few months back he never officially said it was for the Wii. I guess it is nice to know the Wii is the system of choice.

I know, I know; all of these statements are extremely vague and don’t really offer anything new. But, as a huge Nintendo fan, it is nice to hear some anticipated triple-A titles are coming along nicely. Heck, it is nice to know that these triple-A titles even exist. I love Nintendo, but seeing nothing but Wii Music on the horizon is a little depressing.