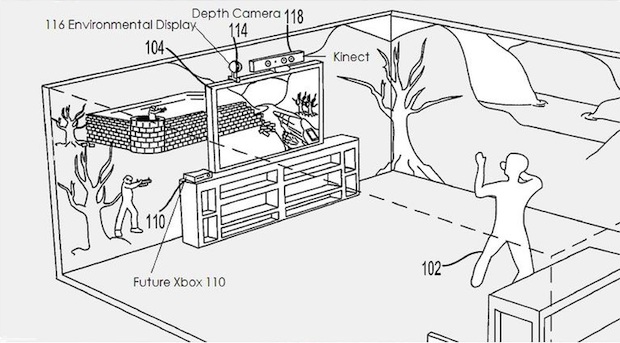 See that image above? That’s from a new Microsoft patent for an “environmental display” to be used for gaming. It’s a display tech that would project a game’s environment onto the walls of your living area, letting you interact with it. This sounds like some space-age holodeck crap, but after reading some of the patent details at Patently Apple, it sounds like they’ve got at least some of this figured out.

Some unnamed projection technology (LCD, LED or LCoS referenced) will project a full world onto your walls, while a 3D camera will detect your exact position, much like a Kinect sensor would. Microsoft says that your television would also tie into the projection.

There’s also 3D involved. Expect to enjoy an “immersive 3-D experience using suitable headgear, such as active shutter glasses configured to operate in synchronization with suitable alternate-frame image sequencing at primary display and environmental display.” So, motion sickness from 3D while spinning around and grabbing at your walls. Neat!

In the crazy diagrams for this patent you’ll see that all of this gear is connected to the “Future Xbox.”

Are you excited about the Future Xbox now?