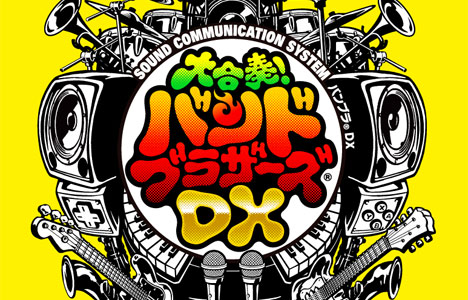 Dale has already mentioned the sequel to Daigasso: Band Brothers the other month, but now we’ve got a few screens and some info regarding the game courtesy of Famitsu.

The game boasts having over 200 songs to choose from when you download songs, and says that you’ll be able to keep up to 100 of your favorites on the game at a time. I’ll admit, the Japanese is a little unclear here. It doesn’t quite specify where you’ll be downloading these songs (i.e. Download Station, or just inputting tabs), but it does clearly specify those numbers.

Another download option that they mention is being able to download other peoples’ rankings, as well as “player assessment” rankings, which doesn’t really give off a clear definition of what they are. From what I understand, it’s basically other peoples’ playthroughs that they’ve saved.

Like Dale mentioned before, the game will have over 50 instruments in it, like the NES sound chip, acoustic guitar, and even a microphone. So, when you try to start singing into your Nintendo DS on the bus, good luck reading the lyrics in Japanese. The singing mechanic will measure you based on pitch and rhythm, so there’s not too much to worry about.

It talks about another feature that will recommend songs and tell you what type you are based on what you play and your voice. It’s a one-sentence highlight, so it doesn’t really go into much detail about how it works. If you’re adventurous, go ahead and check out the Daigasso: Band Brothers DX website to check out the included song list, as well as some of the downloadable songs.