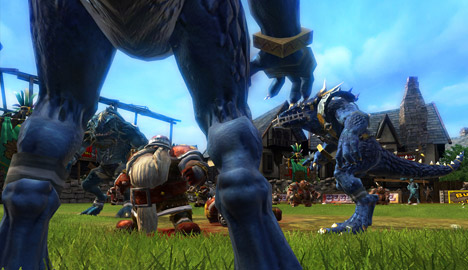 I may not be very knowledgeable when it comes to football, or even sports in general, but I do know what I like: Lizardmen battling Dwarfs.

For that reason and that reason alone, it should come as no surprise that these new images for Cyanide’s upcoming PC, Xbox 360, DS, and PSP title, Blood Bowl, have me wanting more.

If you hadn’t heard, Blood Bowl is based on the board game of the same name, but features a real-time mode in addition to turn-based play. Hot.

Hit the jump for the full press release, and make sure to check out the parody advertisements in the screenshots below.

Previously, we introduced you to two races: the Orcs and the Humans, classic enemies from the Blood Bowl world. Today, we are pleased to introduce two more races: the brave and stout Dwarfs versus the savagely agile Lizardmen. The two teams have completely different tactics that lead to spectacular face-offs when these two teams play each other.

Dwarfs are incredibly strong and are naturally gifted with the “block” ability, allowing a relentless offence against opponents. They can face off against the most fearful creatures and withstand high levels of punishment thanks to Dwarf armor and thick skulls! Their weakness is their slow speed and their poor agility. Opposing teams always have a hard time piercing through these veritable living walls.

Although physically weak, Skinks are one of the Lizardmen’s greatest strength—they like to avoid combat and surprise the enemy with their agility and tremendous speed. If they are confronted by too solid of a defense, the Lizardmen team can count on the dreadful Saurus. These giant lizards represent their team’s blockers and can easily punch a hole in any defense to allow their smaller team-mates to sneak through.

When defense is truly impossible to break (as Dwarf defenses often are!), the Lizardmen can then call in the monstrous Kroxigor, a lizard bigger and more vicious than all others… In the match up between Dwarfs and Lizardmen, the Dwarfs only counter to these mighty beasts are the Troll Slayers — tougher and more reckless than his team mates and thanks to his dauntless skill, brings the Kroxigor back to an even level. With the teams introduced, Let the tackles commence!

Besides the skills that are native to each race and player in Blood Bowl, you also control your team’s finances, which must be managed wisely. During a championship, a large part of your winnings from Blood Bowl matches will surely go toward the purchase of equipment, armor and other team assets like Cheerleaders and Apothecaries. Not to mention the experience your players earn as they play more matches (if they survive!), which will greatly improve the abilities of your cherished players. With many pieces of armor to choose from for every part of your players’ bodies, each with a diverse assortment of characteristics, Blood Bowl allows so much customization for teams that YOUR team will be unlike all others, so you can set yourself apart during both solo and multiplayer games!

Blood Bowl is being developed for the PC and the Xbox 360™ as well as for the handheld systems Nintendo DS™ and Sony PSP™.

Filed under... #Cooler than the other side of the pillow#Weird News