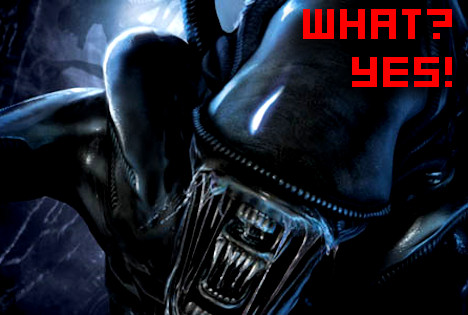 Sega has just announced that it is continuing to make use of the Aliens license by publishing a brand new Aliens vs. Predator title due for release next year. The game is currently going under the simple title of Aliens vs. Predator, and there are no gameplay details or system announcements yet, but there is one rather brilliant bit of news attached to this game’s reveal.

This brand new AvP is going to be developed by Rebellion, the same team responsible for 1999’s incredibly well regarded FPS of the same name that became a LAN party staple at the turn of the century. While no details have been announced thus far, it is reasonable to assume that this game will be a continuation of that hot multiplayer franchise.

This is incredibly exciting news for fans of Aliens games, and I am thrilled by the announcement. Getting a fresh chance to play as teams of Xenomorphs and Predators online is enough to make me wetter than a Facehugger’s underportions.

SEGA will publish an all-new Aliens vs. Predator (working title) game in early 2010. The game is currently in development with independent developer Rebellion, creators of the original 1999 Aliens versus Predator; a legendary title that went on to define an entire generation of multiplayer gaming.

With the opportunity to publish what promises to be a landmark game, SEGA has strategically updated the release of the other upcoming Aliens titles currently in development within its portfolio.

“The innovative new AvP game presents an exciting opportunity for us,” says CEO of SEGA West, Naoya Tsurumi, “It represents a fantastic addition to our growing Aliens franchise and the reinvention of one of gaming’s most cherished iconic titles. By adjusting the release of our other Aliens titles to accommodate it, SEGA will ensure that every title lives up to the high expectations of Aliens and AvP fans.”

“SEGA continues to create masterful games based on our Aliens franchise and this new addition is sure to continue their successful track record,” said Gary Rosenfeld, Senior Vice President, New Media for Fox L&M.

SEGA will announce further details of the new Aliens vs. Predator very soon.