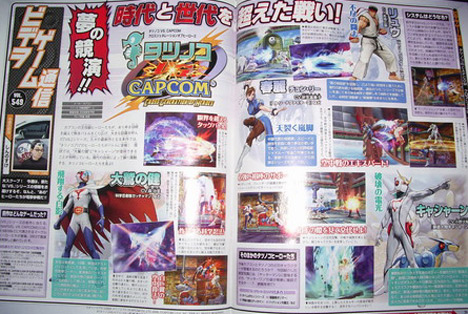 If Samit’s recent HD Akuma spotting wasn’t enough to convince you, this scan from the latest issue of Famitsu (spotted on michiyoyoshiku‘s C-blog) will officially confirm that the rumors are true — 2D fighting games are back from the dead. Capcom may have lost the license to make games featuring Marvel characters, but that hasn’t stopped them from finally moving forward with their “VS” series, though their new crossover partners may not be anyone you’ve ever heard of. Check your calendar before you go on with this story, as you may need a reality check.

First details and blurry scans of Tatsunoko vs. Capcom: Cross Generation of Heroes after the jump.

Who in blue blazes is Tatsunoko, you ask? You must not be Japanese. Tatsunoko is an animation company that’s been producing and co-producing hit shows in Japan since the 1960’s, including Speed Racer, Gatchaman (known to many as Battle of the Planets,) Cassherm, Robotech,  Neon Genesis Evangelion, and weird stuff like this. These guys may not be the best choice for Capcom’s new crossover partner, but they are definitely not worst.

It’s hard to say if this game will ever leave Japan, or if like Namco X Capcom it will be landlocked due to licensing issues. The Speed Racer and Robotech game licenses are always getting tossed around, and who knows what’s going on with the Evangelion game license? That’s assuming that those characters will even make it into Tatsunoko vs. Capcom: Cross Generation of Heroes. So far, the only characters we know will appear in the game are Ryu, Chun-Li, Casshern, and Ken (from Gatchaman, not Street Fighter), so those licensing issues may not be a problem.

Regardless whether this game ever leaves Japan or not, one thing is for sure. Street Fighter 4 looks a lot less exciting compared to this purebred, 2D goodness. Sadly for Capcom, this isn’t the first time one of the core Street Fighter games was overshadowed by a shiny new crossover game. Poor Street Fighter III: Third Strike didn’t get any play next to Marvel Vs Capcom 2. Will history repeat itself between these two upcoming Capcom fighters?

Place your bets below!