It’s certainly an exciting time to be an independent game developer. With the rise of Kickstarter allowing anyone with the knowledge, the skills, and an idea to find support, we’re seeing a larger breadth of games come out that try something a bit different. One such game is Neverending Nightmares, and last year Jonathan Holmes wrote up a nice post about its Kickstarter campaign.

After a few ups and downs, the Kickstarter for this evocative horror title managed to make its funding goal. With release set for September 26, the developers are finally ready to unleash their survival horror game that’s far more personal than most would realize. At PAX Prime 2014, I got the chance to check out an updated build and chat with some of the talent behind the game.

Neverending Nightmares is aims to make players feel vulnerable and anxious. You play as Adam, a young man who awakens from a disturbing dream and finds himself in a place that is not so familiar. Think Richard Linklater’s Waking Life, except as a pure horror title.

Every time Adam wakes from his dream, his environment gets progressively worse. Is it a dream? Or is he having extreme delusions in his waking life?

Players will have to navigate the ever-changing environments to discover the truth, and ultimately find how this all ties into our disturbed central character.

Much like other psychological titles that play with perspective, the horror seen in the game is a reflection of the main character’s psyche and deteriorating mental state. And this was not only for the purposes of narrative and design, but also a form of therapy for Neverending Nightmares‘ creator Matt Gilgenbach, who suffered from mental illnesses. 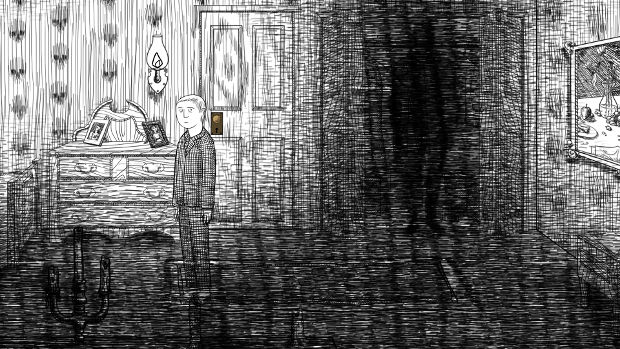 “The original idea was from Matt Gilgenbach, and he wanted to get the player of the game to feel the same kind of mental struggles that he is still dealing with today,” said lead artist Joe Grabowski. “The anxiety that players go through, not knowing what’s around the corner, or when you have the candle you’re still encompassed by the darkness — so that’s definitely the kind of story want to push through. We want bring the subject of mental illnesses to the forefront.”

The sense of dread in Neverending Nightmares is palpable, and you never feel quite safe at all during the game. This feeling is made stronger by the fact that Adam has no weapons to fight back against enemies. In some cases, you’ll have to run or hide in closets to avoid instant death. You’re constantly vulnerable, and you’ll have to use your wits and reflexes stay a step ahead of your foes.

Gilgenbach wanted to make the visuals evoke classic 20th century horror fiction, while using color as a little as possible. “Our art style in general was inspired by Edward Gorey, so we looked at that early on for the game,” said Grabowski. “We’re able to have the black and white aesthetic, but also things in color for the purposes of gameplay.” 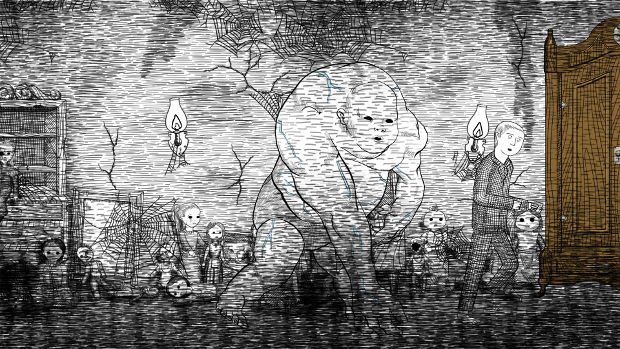 As you can see in the trailer and screenshots, color is used to emphasize horror while also highlighting special items that can be interacted with. In many ways, it felt like I was walking through one of those Scary Stories to Tell in the Dark books — you know, the ones with the disturbing illustrations that ended up being more frightening than the stories themselves. I felt that same kind of unease when playing through this game. It was unsettling. But of course, that’s the point.

It’s pretty amazing to see that such a horror title would be a form of therapy for some, but also a means of shock for others. Neverending Nightmares channels dread and terror quite well, and if it can hit the same nerve that struck me as a child, they’ve certainly got something special in store for players come release on the 26th.