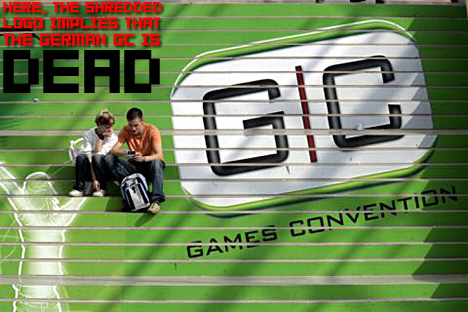 The world finally has a winner in the battle for European videogame convention supremacy. The organizers of the annual Games Convention in Leipzig, Germany, conceded defeat today to the new kid on the block: gamescom in Cologne, Germany. Leipziger Messe, the company behind GC, dropped the massive event in favor of a new one that will take place from July 31st to August 2nd, Games Convention Online; it will focus solely on mobile, browser-based, and client games.

The Games Convention and gamescom had been duking it out for a while, but things shifted heavily — and apparently, decidedly — in gamescom’s favor once BIU (Germany’s equivalent of the ESA and ELSPA) sided with the latter convention. Of course, gamescom (August 19–23) released its own “we are awesome” announcement today to shove it in GC’s face; you can find both press releases below.

We’ll pour out a 40 liter for Leipzig, but we’ve got a feeling that the convention’s drunken debauchery will simply move west to Cologne instead of disappearing altogether. It probably didn’t help that the Leipzig event had the most uninspired name of all time.

Leipzig, 29 January 2009 – From 31 July to 2 August 2009, Leipziger Messe presents a new games fair. Headlined GAMES CONVENTION ONLINE, it is the first independent platform in Europe for what is currently the most dynamic market in the gaming industry: browser, client and mobile games. The new gaming trade show is supported by market leaders in the online industry such as BIGPOINT and GAMEFORGE.

Carsten van Husen, CEO at GAMEFORGE 4D, emphasises the need for the industry to have its own platform: “The size achieved and the dynamics for growth in the market for online games really cry out for a strong fair – in Europe too. Given our domestic industry’s leading world role for this segment, Germany is predestined to serve as the location.” GAMEFORGE is the biggest independent provider of online games worldwide. More than 65 million gamers are registered for GAMEFORGE games which are on offer in 50 languages.

Nils-Holger Henning, CCO at BIGPOINT: “We are very pleased with the recognition shown to the games industry with two big and important fairs in Germany. We very much welcome the fact that with the GAMES CONVENTION ONLINE, Leipzig is now offering a trade show for online and casual gaming. This confirms that as an entertainment branch worth taking seriously, online gaming has an important role to play within the overall game industry. In the area of online and casual gaming, there is a big need for interchange, as shown by the internationally established trade fairs. The topics are precisely aligned to our needs, and in both the consumer and business area we can appeal to a public that is specifically interested in online gaming. Exchange within the industry, contacts with small, dedicated developers and the technical subject-matter dealt with at the GAMES CONVENTION ONLINE will contribute to strengthening and driving forward the online and mobile gaming industry.” BIGP OINT is one of the 200 biggest websites and the biggest game portal for browser-based online gaming worldwide. The Hamburg company is growing daily with more than 150 thousand registrations in 30 languages.

Wolfgang Marzin, CEO, Leipziger Messe, sums up the excellent starting-point for the GAMES CONVENTION ONLINE. “Worldwide, Leipzig means games”, he says, referring to the high profile enjoyed by the “Games Convention” brand. “The GAMES CONVENTION ONLINE provides an independent platform of its own for the most dynamic growth market in the gaming industry.” The rapid spread of browser, client and mobile games was the basis for rapid development of the industry’s new trade fair. “On the Asian market, a third of the population already regularly plays online games. In Germany too, the final barriers are being broken down with the rapid spread of fast broadband connections and mobile wireless connection standards.”

The figures for German and world market development underline Marzin’s assessment. “Global Entertainment and Media Outlook 2008 – 2012” (Source: PWC, 2008), for example, predicts global growth rates of up to just under 20 per cent for online and wireless games (whilst sales for PC games are set to drop by an average of 1.2 per cent).

The German market is driven by the spread of faster internet connections. The number of households with broadband is set to double in the coming years. Whilst broadband coverage was still at 44.5 per cent of all households in 2007, experts expect an increase to 82.9 per cent for 2012 (Source: PWC, 2008).

For the European market, the Verband der deutschen Internetwirtschaft eco (Association of the German Internet Industry) concludes that sales turnover for mobile phone games will also double by 2012 across Europe, on the basis of a figure of 2.4 billion euros for 2008 (Source: eco, 2009). In Germany, every fifth mobile connection user also plays games on his or her mobile, in other words, about 11 million users in 2008 (Source: comScore, 2008).

The GAMES CONVENTION ONLINE will be organised in two separate areas, namely for the trade and professional public on the one hand, and for gamers on the other.

The Business Center is at the hub of the fair with a trade show exhibition and professionally organised matchmaking. There will also be an integrated dialogue conference. Individual forums at the conference will be shown online for registered participants (for a conference fee).

New: test out trade show innovations online!
Access for millions of visitors everywhere in the world

In the public exhibition halls, exhibitors present themselves alongside many events and show matches. For this part of the fair, Leipziger Messe has joined forces with the industry to develop a completely new concept. “We will be combining the real fair, that is, the offline event, with an online event” explained CEO Wolfgang Marzin. “This means that millions of gamers are linked in on the internet and can take part in the GAMES CONVENTION ONLINE in Leipzig live. The GAMES CONVENTION ONLINE will host tens of thousands of visitors in Leipzig, and several million in the whole world.”

For this to happen, the new event will be accessible on the internet throughout its entire duration. Several exhibitors are creating links to the new games being introduced at the Leipzig show. As long as the GAMES CONVENTION ONLINE is still taking place in Leipzig, access is free of charge.

In partnership with exhibitors, Leipziger Messe is organising various special events for gamers. Several communities and leagues are being invited to meet up at the GAMES CONVENTION ONLINE in Leipzig. Championships will be held in the run-up to the fair so that their winners can travel to Leipzig and the finals can be played live at the fair against online gamers. For the finalists, their stay in Leipzig is combined with an exclusive luxury prize package. There are also plans for a role-play event.

For the premiere of the GAMES CONVENTION ONLINE, Leipziger Messe is preparing a partnership with South Korea. The Korean involvement is backed by kotra (Korea Trade-Investment Promotion Agency), the Korean government foreign trade and investment promotion agency. In-Sung Park, Business Development Manager at kotra, says: “We are pleased that Korea has been invited to be the first national partner for the GAMES CONVENTION ONLINE. We will soon have confirmation from the Ministry of Culture. Korea is a forerunner in the market for online and mobile games. Furthermore, Korea is the biggest market for online games and occupies a leading position worldwide for mobile games. We have considerable know-how in the development and marketing of games and we can contribute this to international partnerships. The GAMES CONVENTION ONLINE conference is a particularly well-suited forum for setting up new business contacts and opening up new markets across continents. We are happy to support L eipziger Messe in the organisation of business matchmakings.”

In Korea, online gaming has been the number one national sport for some years. 80 per cent of all households are linked to the internet. Every third Korean is registered as a regular online gamer, making a total of more than 18 million women, men and children (by comparison: Germany currently counts 4.15 million online gamers). For 2009, Korea expects the online gaming market to reach sales worth 1.7 billion USD (Pearl Research, “Online Games Market in Korea”, 2008).

In announcing the new gaming fair, the Leipzig CEO Wolfgang Marzin emphasised: “This is a completely new and fully independent product for a market that is adjusting to new business models, setting off along new sales routes and appealing to new target groups. Browser, client and mobile games are on course to becoming a big success story and in that way, the GAMES CONVENTION ONLINE is like the GC – Games Convention when it first began. We are delighted that as trade fair organisers, we can again accompany this development too.”

Leipzig, 29 January 2009 – At gamescom – Europe’s new event and entertainment highlight – the international games industry will exhibit its entire repertoire of interactive entertainment software and hardware in Cologne from 19 – 23 August. In addition to member companies of the German Trade Association of Interactive Entertainment Software (Bundesverband Interaktive Unterhaltungssoftware (BIU)), who plan to exhibit their diverse game portfolios for both casual and core gamers in Cologne, many other exhibitors from all sectors of the games industry are preparing for the event. In gamescom’s Business and Consumer areas, there is a marked increase in leading companies from online and browser games – one of the industry’s growth markets.

The presence of this business segment at gamescom is quite important for several companies, including Ubisoft. General Manager Ralf Wirsing had this to say: “In Cologne we will have the opportunity to both present our range of products to an international market and to familiarise ourselves with the new products of the other national and international market participants. If you look at the numbers of registered gamers in the online and browser markets, the growing importance of this segment is unmistakable.” Thomas Friedmann, Executive Director of Funatics, is looking forward to the presentation of online and browser games at gamescom for another reason: “Online games are constantly changing the conventional market. Given the intensity of gamer usage, the growth figures alone are just one interesting aspect. So we’re quite excited about the market, which will have an attractive environment to exhibit its newest developments in Cologne.” From the “Global Player” league, Electronic Arts Executive Director Dr. Olaf Coenen explains: “gamescom will set a new tone, internationally. There’s no doubt about that. We’re looking forward to the starting signal and can’t wait to meet our partners and customers from Germany and around the globe at Koelnmesse.”

For Bernd Grannemann, Head of Sales & Commercial Marketing at Tivola, the combination of trade fair concept, location, and internationality is the heart of gamescom’s success: “As an internationally successful publisher of computer and console games for children and young adults, we’re hugely excited about the start of gamescom. The casual-to-core exhibition concept at Koelnmesse affords us the opportunity to present our products in the appropriate topic settings.” International stimuli will be coming from France among other countries. In cooperation with Koelnmesse, Ubifrance will organise the joint stand for the French games industry. Regional networks like gamearea FrankfurtRheinMain will also focus on Cologne.

In addition to commerce and presentations by developers and software publishers, the hardware sector will complete the trade fair offerings at Cologne. Christoph Thomas, Executive Director of Hama, concludes: “As an expert in accessories, Hama always positions itself in the direct vicinity of the market leaders in device manufacturing and, in this case, games as well. This August, all the “big players”, gamers, and specialist visitors on both the national and international markets for computer games and interactive entertainment will convene in Cologne. gamescom represents ideal conditions for Hama to engage in successful business.”