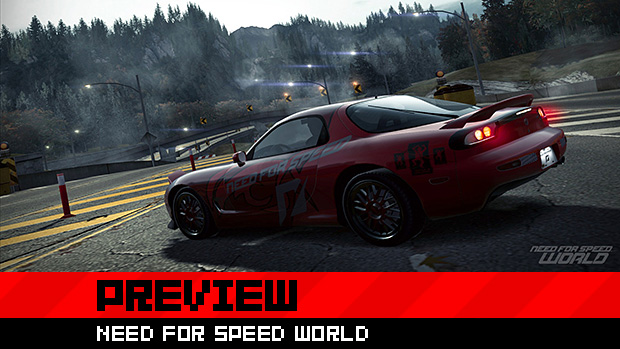 Electronic Arts has stated a preference to cut back on packaged retail games and transition into a publisher that provides service-based digital goods. When I brought up that point at a recent EA showcase to Marc De Vellis, a producer on Need for Speed World, he affirmed it, noting that the game is “huge for the company [EA], huge for Need for Speed.”

Need for Speed World is a PC-exclusive Need for Speed MMO that is in development at EA Black Box and EA Singapore. It’s a major part of EA’s push toward digital services; the game is a free-to-play, microtransaction-based MMO, which is a market that the publisher already took a stab at with 2009’s Battlefield Heroes. This is certainly the first attempt at an MMO in NFS history [aside from 2001’s Motor City Online –thanks, Triple Up!]; in fact, De Vellis asserted that nobody’s ever done a racing game like this. 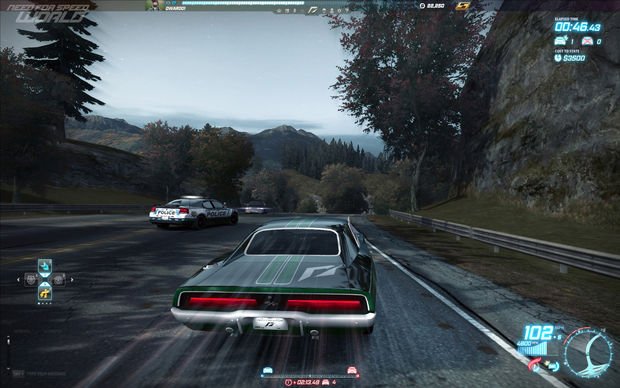 The game world in Need for Speed World is already “the biggest Need for Speed arena ever,” and it’s only going to get bigger. Currently, the game offers more than 150 miles of roads to race on; longtime NFS fans will recognize parts of it as Palmont (from 2005’s Need for Speed: Carbon) and Rockport (the setting of 2006’s Need for Speed: Most Wanted). De Vellis told me that the developers will add new sections to the world after the game launches, and that they will likely be taken from other hit NFS games. Even as areas are bolted on to the existing framework, the world will remain seamless.

Expansion is the ethos behind Need for Speed World. Because EA is keeping the game exclusive to the PC, and because it is an MMO, the developers aren’t constrained to a traditional build-it-and-ship-it development cycle. “The game you see today will be completely different in three months, six months, nine months, twelve months, two years — we’re going to be expanding this game for as long as we can,” said De Vellis. Along with new playable regions, plans are in place to “regularly” add cars, social features, and game modes. And the impetus behind new content will be the user base: fan feedback will be incorporated into development, so “if there’s huge outrage for a certain mode they want so bad, I can almost guarantee that we’ll build it,” promised De Vellis. “We’re here to make the fans happy.” 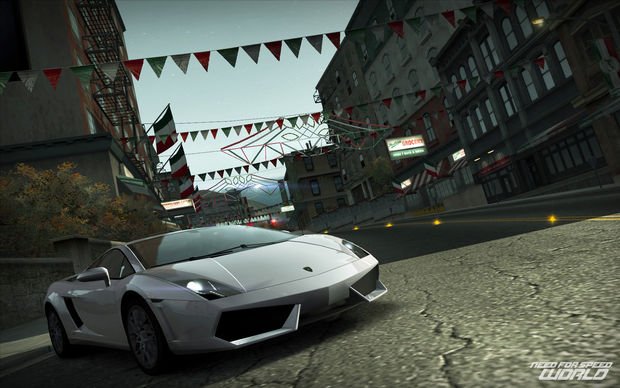 De Vellis described NFS World as “highly social.” The dev team has discussed the integration of platforms such as Twitter and Facebook, and in the game itself, usernames are displayed above players’ cars. This is why the game world is so massive — at any one time, EA expects tens of thousands of users to be driving around and interacting with each other in the “Explore” mode. Right-clicking on another car will add that person to your friends list, and from there, you can invite them to cooperative or competitive races. Of course, since all those other drivers would be quite an impediment in a race, all events are instanced — it’s just you, the other players’ (or AI) cars, and the world’s omnipresent traffic.

At launch, NFS World will offer three of the franchise’s hallmark modes: circuit races, point-to-point sprints, and cop pursuits. “This game is going […] toward Need for Speed roots — it’s classic Need for Speed. It’s all about racing, but with some cool, unique, modern strategy added to it,” De Vellis explained. That means that there won’t be any cutscenes starring Maggie Q. So where does the “modern strategy” come in? Power-ups. I saw two of these in action: Traffic Magnet, which sends traffic careening toward an opponent’s car, and Ram, which increases the mass of your car so as to reduce Traffic Magnet’s effectiveness (traffic will just bounce off of you).

Power-ups are part of the game’s economy. At the end of a race, you can use the “lucky draw” system to choose between in-game cash, “rep” points (i.e., your level), or power-ups. With cash, you can trick out your car; since you don’t have a human avatar in the game — there’s never a time where you’re out of the car and on foot — vehicle customization is the focus and the outlet for users’ individuality. NFS World features licensed cars; shortly after launch, there will be more than 100 to choose from.

Of course, if you don’t want to grind in order to earn this stuff, you can pay real Earth money and purchase power-ups or rent new cars instead of unlocking them. De Vellis stressed that while the developers are still tweaking the cost structure, they don’t want to put stuff behind a pay wall — that is, you’ll hopefully be able to earn all the content in the game if you play long enough. “We don’t want a guy who has spent money to destroy people who level up through the game,” he said. 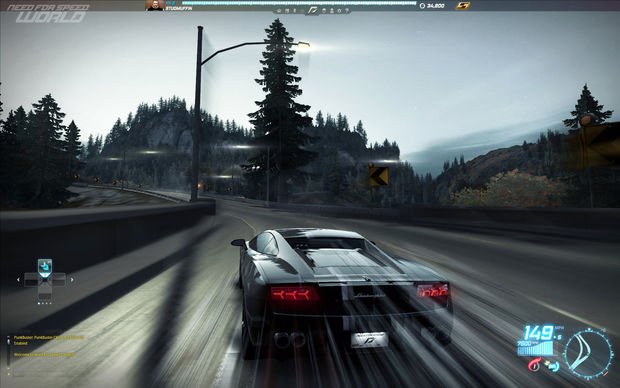 De Vellis also emphasized the scalability of NFS World, saying that the developers have it running on computers “from every min-spec laptop to high-end desktops.” The idea is to make the experience accessible to as many players as possible, because people have to be able to try it in order to start spending money in it. The game will run on all kinds of PC configurations, and it will offer many control methods, too. I beat De Vellis in a race for which we both used keyboards, but the game is being tuned to work with a variety of steering wheels as well, and it will ship with Xbox 360 controller support.

The Need for Speed series has built up an immense following over the years, and this is by far the most ambitious effort yet to capitalize on that fan base. “Freemium” MMOs are delicate operations, as EA found when it altered the pricing model of Battlefield Heroes and lost a chunk of the player base, so I’m very curious to find out if this game can become the cash cow that EA is hoping for. You can sign up to participate in the closed beta on the NFS World Web site, so give it a spin and see what you think. If you’re on the fence, check out the announcement trailer.