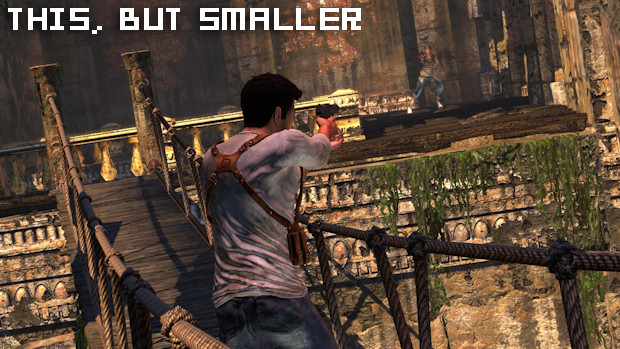 Uncharted 2: Among Thieves is gearing up for its big console release and the endless 10/10 rave reviews that it gets to enjoy as a PS3 exclusive, but developer Naughty Dog has been chatting recently about the possibility of taking Drake outside the Black Box o’ Blu-ray, voicing interest in a potential PSP outing for the treasure hunter.

“We’d love to see Uncharted grow beyond the PS3,” explains Evan Wells. “It would be interesting to see what sort of changes to the design one would make for a portable system. But right now Naughty Dog is purely focused on PS3 development so we can’t promise anything from us in the near future.”

Would you like Uncharted on your PSP? It would certainly be interesting, although arguably one of the series’ biggest strengths is the breathtaking selection of hi-def and lavish environments. That would be quite difficult to capture on the humble PlayStation Portable, but I’d totally be willing to let ’em have a go.