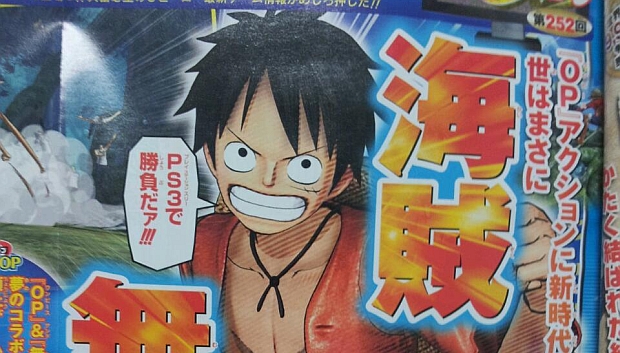 [Update: We’ve added the leaked scan to the gallery below.]

If you don’t know what I wrote in that headline means, you’re probably not in the target audience. But if you do know, this may be the news you’ve been waiting for. Leaked scans of Japanese manga mag Shonen JUMP have more or less confirmed that the game Namco Bandai and Tecmo Koei have been teasing for the last couple of days – and are still teasing – is One Piece Kaizoku Musou, with its course set for the PlayStation 3 and sails unfurled by Omega Force, the Dynasty Warriors people.

It was really just a matter of time. As the best-selling manga of all time and one of Shonen JUMP‘s holy trinity of battle series, One Piece was long overdue for a current-generation game, especially with two Naruto fighters and a Bleach-based button-masher already on the home consoles. I suppose the only question PS3-owning One Piece fans will have to ask themselves is whether they care about a game that will probably play kind of like Dynasty Warriors.