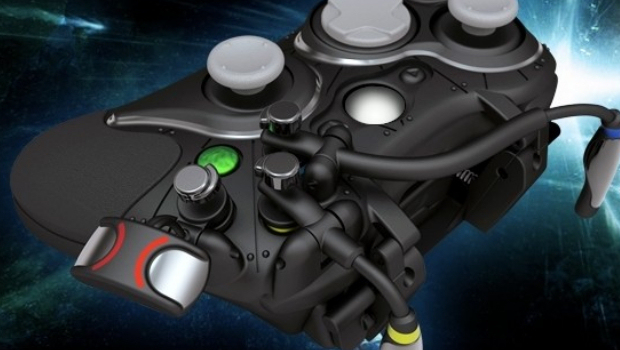 Earlier this week, Paul Christoforo became the Internet’s archenemy after evidence of his terrible customer service were made public. One silent party in the resulting carnage was N-control, the maker of the Avenger Controller that Christoforo’s Ocean Marketing firm was repping.

The manufacturer has since announced that it’s dropped Ocean Marketing and will be taking back its sales and marketing operations.

“We have to move forward and take care of Avenger’s customers,” said N-control’s new consultant, Moisés Chiullan. “I can’t worry about the fact that there isn’t a bus big enough for me to throw Paul Christoforo under. The Internet did that for me. I think they set him on fire too. I just hope that people will have the common decency to leave his wife and child out of all this. They didn’t send those emails, Paul did.”

The company has apologized for Ocean Marketing and the behavior of its CEO, while making damn sure to remind everybody that its products have nothing to do with the firm. Hopefully that’ll stop people Amazon bombing the Avenger, since it really was an innocent party in all this.

Miami, FL— Wednesday, December 28, 2011— N-Control, makers of the Avenger Controller accessory, have categorically dismissed third party contractor Paul Christoforo and his marketing operation, known alternately as Ocean Distribution or Ocean Marketing. This separation from Mr. Christoforo extends to all business interests of N-Control, its founders, and its officers. Mr. Christoforo does not and never did own, in whole or in part, a stake in N-Control LLC nor its affiliated companies (Kotkin Enterprises, iControl LLC).

Following the publication of an email chain between Mr. Christoforo and one of N-Control’s customers, punctuated by Mr. Christoforo’s acknowledgement of his conduct, N-Control immediately proceeded to extricate Mr. Christoforo’s access to their email and social media accounts, a process that is still ongoing. In the interim, a Gmail address and Twitter account ([email protected] and @AvengerDefender, respectively) have been set up for press inquiries and customer service needs.

David Kotkin, the inventor and founder of the Avenger Controller, created the product to help one of his students who had a physical disability. The student wanted to play games the way that everyone else could. The Avenger evolved from a homemade solution for a deserving child into an even more sophisticated controller accessory, capable of enhancing even the most skilled gamer’s performance.

“Everyone deserves the opportunity to be a part of the gaming community in a fun, positive way.” said David Kotkin, Avenger founder. “I created the Avenger to make people happy. I deeply regret that so many people have any negative feelings toward it as a result of what has happened, especially since I’ve seen first-hand what an impact it can have on gameplay.”

Kotkin continued, “What I’m most concerned about is doing right by our customers. We have dropped the ball by giving them delivery estimates that did not come through as expected. We didn’t expect that the demand would be so great, and we should have done a better job communicating that. Our new team is taking all necessary action to correct that going forward. I hope that people will give us a chance to earn back the faith they may have lost.”

All existing orders will be honored, and PS3 Avenger pre-order customers will all be extended the same $10 discount that some have already received. To clarify, customers who have already received $10 off their pre-order are not eligible for an additional discount. N-Control agrees with “Customer Dave” that all of our PS3 early adopters deserve to be rewarded for their trust in the Avenger.

N-Control would like to publicly apologize to existing and potential customers, as well as the gaming community at large, for allowing Mr. Christoforo to abuse his power so unforgivably. The Avenger was invented to provide greater accessibility to disabled gamers, and bullying tactics are the last thing that should be associated with this product.

In the effort to dispel various misconceptions that have been forwarded via news reports and social media, N-Control is offering the following clarifications on a variety of subjects:

N-Control has hired an independent consultant, Austin, Texas-based Moisés Chiullan (@moiseschiu), to field press inquiries and oversee sales and marketing operations going forward. They ask that customers and the press alike bear with them as they field the tens of thousands of emails and other messages that N-Control has received. It is his intent that N-Control should respond personally to everyone who has emailed the [email protected] address regarding this situation.

“We have to move forward and take care of Avenger’s customers,” Chiullan said. “I can’t worry about the fact that there isn’t a bus big enough for me to throw Paul Christoforo under. The internet did that for me. I think they set him on fire too.” He continued, “I just hope that people will have the common decency to leave his wife and child out of all this. They didn’t send those emails, Paul did.”

All PS3 Avenger pre-orders are currently slated to ship by January 15th at the latest. Some orders will ship in advance of January 15th. In consideration of the events of the past two days, N-Control ask their customers to bear with them as they sort out updating individual order estimates. General updates regarding shipping will be regularly delivered to customers starting next week.

Ocean Marketing aka Paul Christoforo owns no stake in the Avenger Controller nor N-Control, and does not stand to profit from further sales of the device either through N-Control or authorized resellers.

Contrary to how Mr. Christoforo may have presented events (in public or private), N-Control never directly endorsed nor had knowledge of his communication with customers in the manner found in his correspondence with “Customer Dave”, who still wants his Avengers, despite everything that has transpired.

Steps have been taken to ensure that all future customer communication is transparently visible to management at N-Control. N-Control regrets sincerely that the trust they placed in Mr. Christoforo was so abused and betrayed and, as a result, may have tainted their reputation with existing and potential customers and partners.

Regarding “Afternoon Artists”, a company registered with the Florida Division of Corporations that lists Paul Christoforo as Treasurer, N-Control has the following statement: “This secondary business has never so much as opened a bank account, much less operated in any form outside of paperwork being filed. It was originally intended that Mr. Christoforo would serve as an investor in this company, which, again, has never operated in any capacity, nor will it in the future.”

N-Control employs Eli Schwartz as a part-time Social Media Consultant. He is an enthusiastic high school student who became one of the Avenger’s earliest super fans, meeting the founder at a trade show. Mr. Kotkin is proud to encourage the development of a bright, enthusiastic young person like Eli.

Eli Schwartz is not, however, in charge of Marketing or PR for N-Control. Previous news reports have credited him as Marketing Manager, a title Mr. Schwartz gave himself without the consent or advance knowledge or N-Control management. This occurred during the period of greatest upheaval following Mr. Christoforo’s dismissal, and N-Control regrets that this mixed messaging reached the public. All press inquiries and media requests should instead be directed to Moisés Chiullan at the [email protected] address.

Contrary to rumors and speculation, Eli Schwartz’s Twitter account is his own and not controlled by Paul Christoforo. Mr. Schwartz is a minor, and consequently, N-Control would appreciate the press and the public’s discretion in their dealings with him.

For the foreseeable future, N-Control requests that customers discontinue use of the toll-free phone number displayed on the AvengerController.com website, as well as any other means of contact found there. Instead, customers should direct communication to [email protected] They ask for patience due to the events of the last two days. Keep an eye on @AvengerControl on Twitter for updates.