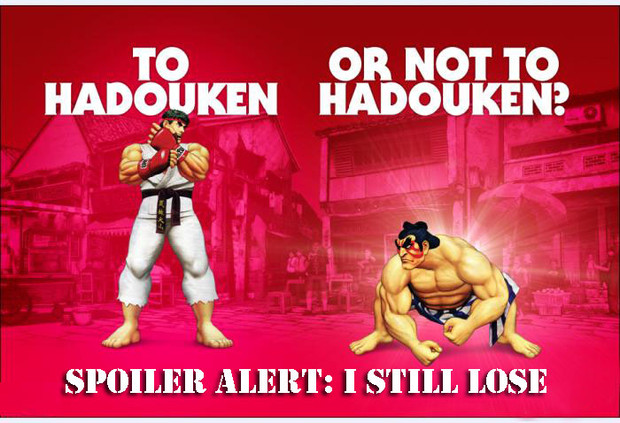 Fighting games are not for me. Just to get this out of the way right now, they are in no way my expertise. They are my incredible weakness. I am that button masher. Yes, that guy. I read the combos from the book. I try to memorize the combinations. I try to transmit that information to my hands in the heat of uppercuts and low kicks, but they never get there. Instead, the only communication the muscles in my fingers get is confused signals, sent whole minutes too late to block air combos are duck under high kicks. In the end, you’ll find me just hitting the jump button too many times and screaming “CAN I HADOUKEN IN THIS GAME?”

Usually, I can’t. But ever since my days of being 11-years-old and trying to hammer out combos in Mortal Kombat in my friend’s wood-paneled rec room, there has been an unexplainable phenomenon.

Put a Native American character in my hand and I will tear your face from your skull.

I can’t explain it. When it comes to fighting games, gameplay is pretty straightforward. Learn to combo and block or you lose. There are few ways around this fundamental rule. If you don’t know how to play to your character’s strengths, you won’t win. But through some hilariously ironic loophole, my ancestry transfers some mystical strength to me whenever you put one of those racially inappropriate characters into my hand.

In my day as an adolescent, fighting games like Mortal Kombat, the Street Fighter franchise, and Killer Instinct were the social equivalent of a gentleman’s duel. Or the Thunderdome. If an argument about which Ninja Turtle was best or whose turn it was to play with the BB gun ever came to confrontation, it wasn’t settled with scrappy kid-brawls. It was settled on the screen. This was an unfortunate unspoken rule for me, since I seemed to have been born pre-disposed to suck horrifically at fighting games. I thought I was doomed to face forever defeat. Until the day I discovered a man named Nightwolf.

Previously, it hadn’t mattered which character I picked. They were all a flurry of ineffective button smashing. It came down to which character was more amusing to watch perish by some brutal fatality or slow-mo punch. So the day I choose this racially inappropriate character in blue pants, I had no expectations of victory. I began with my usual technique of slap the keys with my chubby kid thumbs until I didn’t have to play anymore. But something different happened. Rather than the usual impotent, hopping rave dance I would end up making my character do, I watched this goofy, face-painted character toss my opponent straight into the air with an ethereal tomahawk.

I found this wasn’t some accidental coincidence. I mean, hit the buttons enough and you’ll stumble upon a combo eventually right? Monkeys on typewriters. But it wasn’t some fluke. As I flailed away on the buttons like usual, my character acted almost autonomously, ripping each and every challenger to shreds. Something just made sense about his button layout; his combo sequences and follow-ups.

Of course, my friends called ‘bullshit’ on my spontaneous win and every subsequent victory. And they weren’t alone. Nightwolf has long been branded as a cheap character, capable of purposefully juggling characters and linking combos into unbreakable sprees. But this isn’t why I was winning. It couldn’t be. Because, to exploit a character’s moves, you have to have even an inkling of understanding on what you’re doing. I certainly didn’t. Still don’t.

Soon, this rage against my inexplicable success turned to confused awe. My friends were sure this was no coincidence. It wasn’t some random chance I was unrealistically capable with this character of all the characters. I was a witch. A digital shaman. They were sure it had something to do with the fact that I myself was a Native American.

Actually, we can all do this.

I know, I know. You probably can list seventeen people off-hand right now that like to bring up as often as possible how they happen to be 1/27th Cherokee or that their third cousin is maybe, possibly 2.3% Mohawk. I sympathize and I’m not far off myself. By however the science of genealogy works, I’m only a pale-faced quarter of a Mohegan tribal member, but an officially recognized Indigenous none-the-less. I’ve attended the Pow Wows and our historical museum and even our fine, painfully un-ironic casino. When I fill out applications, I check the Native American box. The nice guys that the Mohegans are, they even paid for my entire college education. Fine, stand-up gentlemen those guys are.

But, was this phenomenon really some sort of cosmic coincidence? Was my somewhat irrelevant tribal ancestry really some source of video game expertise? My outrageously pale skin speaks volumes otherwise. But this bizarre racial bonus was ever persistent and it wasn’t just exclusive to Mortal Kombat. Fire up some Street Fighter II and put T. Hawk in my hand. Watch what happens. Chief Thunder? Oh, you’ll seen nothing but a blur of hatchets and blood, my friend. And this penchant for effectiveness with racially inappropriate characters doesn’t end there.

Few games feature bow and arrows these days. And why would they? When games deck out their arsenals with laser rifles and rocket launchers, who wants to mess around with an archaic weapon with strings instead of power cores? But a few games sneak these beauties in and, without question, I mess some serious shit up with one in my hand.

Friends and enemies alike still wake up from nightmares, hearing that slow, mechanical click click click of the Gears of War’s torque bow. That quiet ticking of tension gears is just the calm before that inevitable, fleshy thunk of me sticking you square in the ass with an exploding arrow. Put a chainsaw gun in my hand, and I’m about as moderately confident as any other player. I’ll miss you miserably with the shotgun and my sniper shots will pass by you, leaving your head intact. But give me that bow and I will end your world.

Turok, Prey, Thief, Oblivion. These games are child’s play to me if you let me arch back that bowstring as I regretfully admit my inexplicable prowess. Give me that unlockable bow and arrow in Resident Evil 5 and I will turn Sheva Alomar into a mechanized death dispenser as hordes fall at my feet with sharp arrows sitting right between their eyes. Crack out the bow and arrow in any Zelda game and nothing will stay alive. Go ahead. Test me. I’ll even do it while riding the horse with that not quite accurate Wii remote waggle control scheme. Doesn’t matter. Everything will still get an arrowhead buried deep somewhere in their cerebral cortex.

It’s unexplainable and even somewhat upsetting. Let’s not also forget that these characters I’m cursed to excel with are usually not polite representations of my ancestors. Few are just quietly listed as Native Americans in some back-story somewhere. Not simple, respectful attempts at adding some character variety and pay homage to a rich culture history. No, I’m talking about painful caricatures. Extraneous head-dresses, war paint, missing shirts, criminal abuse of jacket fringe. The power of nature, wolf sidekicks, ethereal tomahawks, spirit bows. Walking, talking, fighting versions of the Cleveland Indians logo. It’s as if every game designer’s only experience with Native American culture is Tonto from the Lone Ranger.

I suppose it’s the universe’s way of teasing me for my almost comically irrelevant racial identity. Most people have difficulty associating with any part of their genealogy. We’re often all such eclectic mixes of cultures and nationalities, that most of what composes our family tree ends up being somewhat trivial when all is said and done. So when I discovered this bizarre, ultimately satirical, real-life Dungeons and Dragons racial bonus, I almost wish it wasn’t so. A curse, some may say. Source of endless harmless jokes from friends when I stick another enemy despite impossible odds or distance. But, call it what you will. It doesn’t change the fact that if you put an inappropriately war-painted mockery of a proud culture of people at my fingertips, I will decimate your sorry face with infinite combos. It’s just my coincidental video game expertise.