PlayStation Vita title Murasaki Baby looked to be pretty dark and twisted in its debut trailer at Sony’s gamescom press conference earlier this week. Now that I’ve played it, I’d say that it isn’t quite as dark as it first came off to be. There’s actually a cute side to it.

The cuteness starts with the premise: the player uses the Vita’s touchscreen to hold the hand of a baby carrying a balloon. You’re to guide her on her journey to bring this balloon to her mother, as she is lost. This baby is kind of cute in an upside down head with huge eyes kind of way. Scary cute, if you will. 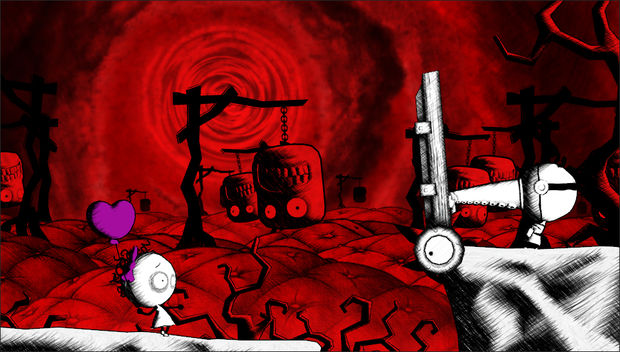 Gently guide her with your fingertip and she’ll follow nicely. Pull her arm too hard and she’ll resist a bit.  And like a baby, the more you encourage her, the more bold she’ll become. While you have to work to get her to follow your finger at first, she’ll start to enjoy the walk on her own before long. Before you know it, she’ll charge full speed ahead on her own. But when danger is just ahead, you’ll have to use the touchscreen to slow her down a bit.

The entire game uses touch control. While you’re usually using one finger to drag this baby along, there are times when you’ll have to glide your finger across a gap to have her hop over it. And when strange things try to come after her or her precious balloon (you lose when the balloon is popped), you’ll have to fend them off with a fingertip. I batted down strange insect-like safety pins that tried to attack her balloon early on.

Just like a baby, this one is always cautious, and scared easily. She’s in a world that can change on the fly, so there are lots of opportunities for her to be scared. As her guide, it’s your job to make her feel safe. This could mean that you have to move a hanging lamp into a cave to scare away bats, or flick away hanging tentacles.

Babies can change moods very quickly, noted Gianni Ricciardi of developer Ovosonico. Playing on this, swiping the back touchpad of the Vita can change the world for this baby. The baby, the ground, and often other elements stay in place, but the backdrop changes as your fingers glide across the back of the Vita. While strange, the look of these worlds is supposed to represent a baby’s different moods — happy, sad, scared. 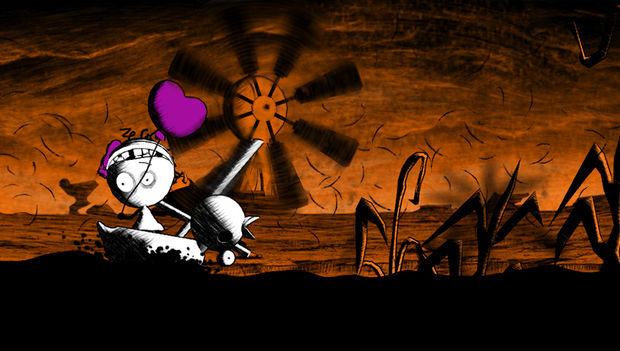 When you come across another balloon in the game, it can be popped, adding another world background for you to flip to. Some of these worlds contain solutions to platforming puzzles. For example, one world had smog that blocked the baby’s path. By switching to a background that contained a windmill, I was able to blow the smog away to progress.

The world of Murasaki Baby looks like a sketchbook came to life, complete with scratchy shading lines a focus on black and white imagery. It’s just as striking and beautiful as it is strange. Some really nice work has been done with shadow, light and depth. Screenshots don’t do it justice.

Riccardi told me that in this early alpha stage they’re trying to optimize frame rates to make play more responsive. The game played fine, though some jumps were slow to respond. The engine that powers this lovely art and animation is still new, and it’s somewhat taxing on the Vita’s hardware, so they’re still figuring it out.

The first level I saw was definitely strange with its hanging tentacles, creepy creatures, and freaky objects. Ricciardi told me that the first level is called the “tentacle boy level.” When I asked why he pointed to all the wriggling and dangling tentacles on the screen and sort of smiled. 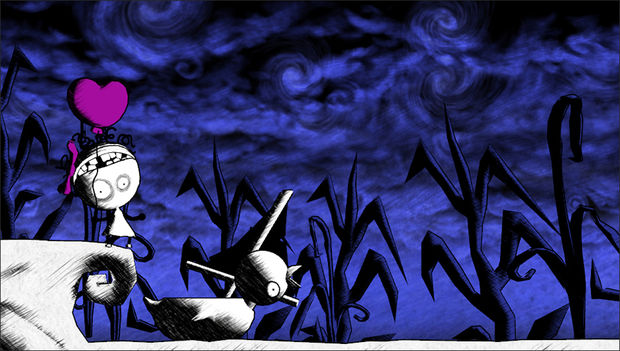 Ricciardi explained that there will only be four worlds in Murasaki Baby, and that the player could finish the game in one sitting of about 4 hours if they wanted. He said that he is looking for a short and powerful experience, one that has players growing an emotional connection with this baby they’re dragging around.

What’s most interesting to me is that he chose to tell the story without words or narration. The baby’s actions and the things you discover together tell the story. And with the particulars left out, Ricciardi hopes that each player will have their own interpretation of Murisaki Baby‘s story.