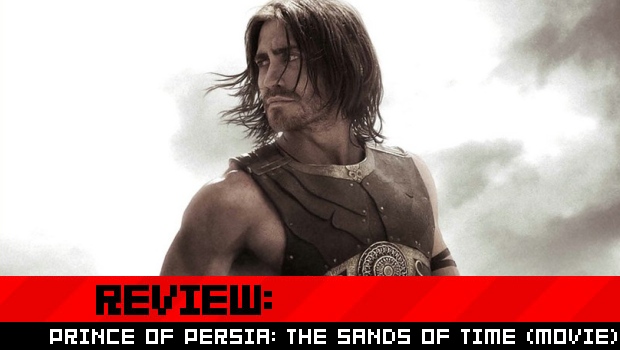 Take everything you liked about the videogame Prince of Persia: The Sands of Time and throw it out the window. The plot, the characters, the larger than life set pieces, the time-stopping/rewinding action — take all that and throw it away. Now, replace it with Jake Gyllenhaal, a bunch of other white people and an ostrich race. What do you think the outcome will be?

I’m guessing most of you have determined how this review of the movie version of Prince of Persia: The Sands of Time is going to go. However, if you’d like to see me tear into it like a rabid animal into a man’s flesh then hit the jump. I will also attempt to quell my anger at the fact that the film in an abomination of the videogame and try to review it as a summer action flick in the last paragraph. That might be fun.

I wasn’t joking that Prince of Persia the movie has little to nothing to do with the game’s plot. Other than a dagger that rewinds time and a few key characters it really doesn’t. The game’s plot has important elements like character development, a story arch and believable relationships. The film’s plot starts at point A and ends at point A (literally, this is time travel we’re dealing with), and almost nothing has changed. I’m sorry if that spoiled the ending somehow, but maybe you just won’t see the movie now.

Prince of Persia the movie finds the titular prince with a name, Dastan (Jake Gyllenhaal), and as an adopted son of the King of Persia. See, the King saw Dastan get in a street fight and show bravery so he adopted him and brought him home to his two other sons. Fifteen years later Dastan and his brothers are fighting some war and come upon a holy city ruled by Princess Tamina (Gemma Arterton). Under advice from their uncle, Nizam (Ben Kingsley), they attack the city and take it over. During the battle the Prince picks up the Dagger of Time. Eventually, Dastan is framed for the murder of his adopted father, the King, and runs away with Tamina to prove he’s innocent. Oh, and the dagger can rewind time up to a minute thanks to the Sands of Time in it, but that’s such a small part of the movie I figured it wasn’t that important.

By making Dastan, who rocks almost every look the Prince has ever had during the film, an already hardened and heroic character the film completely obliterates almost all of the character development that takes place in the game. Instead of an interesting and layered Prince you get an admittedly in-shape action hero who is only as fun to watch as the current action sequence he is in. In fact the only thing that seems to really return from the game is the bickering between the Prince and Princess, but even that falls flat thanks to the fact that neither of them have any depth. There’s no reason for them to be bickering because both of them are fantastically good looking human beings whose motivations are neither suspect or unjustified on either part. In short, the interesting aspects of the characters are gone and the parts that simply added more depth to them are now their entire character. Thank goodness their bickering is tolerable and at times clever and that Gyllenhaal is a talented enough actor to imbue a little life into the Prince.

Moving past our two protagonist the film becomes a cookie cutter display, with every cliche in an action movie represented. Alfred Molina plays the comic relief as a thief with a heart of gold while Kingsley romps around like he’d rather be somewhere else. And then there is the token black guy. Seso (Steve Toussaint) has around ten minutes of screen time until he is suddenly propelled into the role of noble warrior/sacrificial lamb for no apparent reason other than the filmmakers seem to have remembered they forgot to cast any other minorities in a film that takes place in Persia so they figured they better give him a scene. Now, I’m all for cliche action tropes — I’m an especially big fan of funny sidekicks — but in Prince of Persia none of them fit at all.

Forced characters and crappy plot aside, the action has to please, right? Not if you’ve played the game, watched parkour on YouTube or seen any decent kung-fu movies ever. Every action sequence just feels sub-par to something you’ve seen before, and director Mike Newell simply seems overwhelmed by whatever is going on on screen. His camera jumps at the most awkward times, making what should be smooth flowing chases over building tops turn into a chop fest reminiscent of something Jason Vorhees might leave behind after encountering two teens having sex. Maybe Newell was just trying to mask some disappointing stunts, but whatever it was the sequences feel like a bumpy ride. 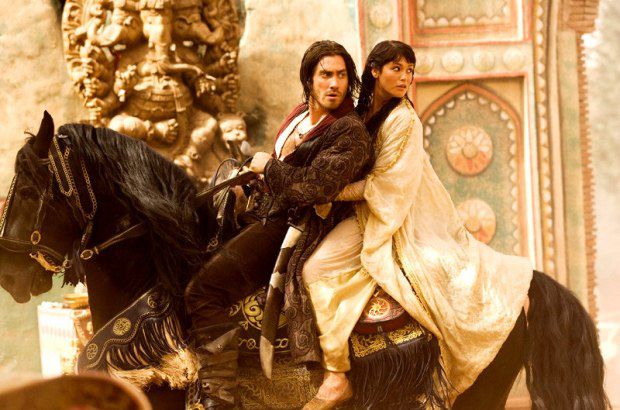 Oh, and that dagger. You know, the one that is the main concept behind the entire game and its gameplay. It gets used three times, and not once in a true action sequence. Dastan has the ability to rewind time with a knife (!) and not once does he use it to fight another man. Sadly, the way the movie’s story unfolds the knife has a very limited amount of sand and thus can’t be used within the story for any cool fights. Instead you get some depressingly poor sword fights and a few solid stunts and Dastan simply using the dagger to kill some snakes. It boggles my mind that the filmmakers would miss out on such an amazing opportunity for some truly mind-blowing fight sequences, and yet they did.

It pains me to even consider the fact that Jordan Mechner, the creator of Prince of Persia, had anything to do with this. He’s credited with the “screen story” so I’m hoping that the other three screenwriters on the movie were the cause of the abortion of a character that is Dastan. I can’t believe that Mechner would take a character he had clearly lovingly created and tear him down to nothing so easily. Then, on top of that, make it once again look like games have sub-standard plots with little emotional depth. I don’t even want to think about the amount of people who will leave the theater thinking that this movie’s story is @#!*% poor because it was based on a videogame, which of course could only have a @#!*% poor story.

But, I digress. It is possible that my love of the Prince of Persia series and my passion for gaming is blinding me to what is actually a decently fun popcorn flick. I have to admit that this is far from the worst videogame movie ever made. That should lend it some credit. Let me settle myself, and consider this outside of the context of being an incredible insult to the original game.

3 — Poor (3s went wrong somewhere along the line. The original idea might have promise, but in practice the movie has failed. Threatens to be interesting sometimes, but rarely.)