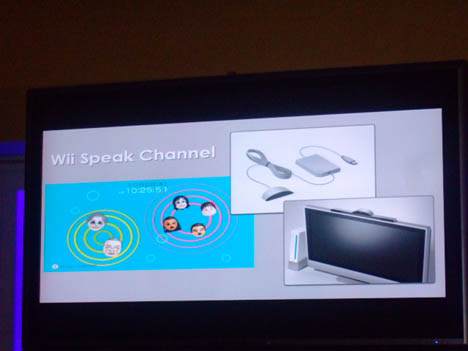 Fresh from the Nintendo Media Summit comes news of a new Wii Speak Channel. This channel will pop up on your Wii on November 16th, and lets you use that handy Wii Speak device we told you about at E3 earlier this year. Don’t have Wii Speak? Get one for $29.99.

The channel lets you speak (or as Destructoid contributor Jonathan Ross suggests, fart) with up to three others that you’ve traded Friend Codes with online at no cost. Your Mii will appear on screen (of course) and mimic your chat. Think of it as a conference call app with all the seriousness sucked out.

You can also used Wii Speak to leave messages (kind of like Xbox Live) or narrate captions for your photos. Or fart.

Will you use this channel? I think it could be kind of cool if you used it as a musical jam session facilitator.