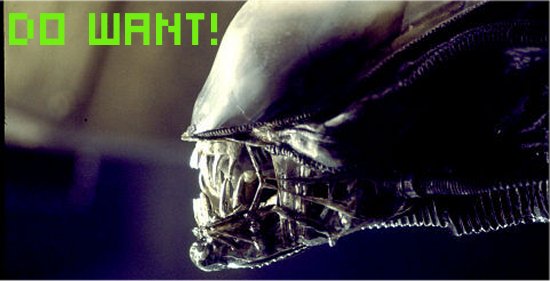 In an interview with CVG, Aliens: Colonial Marines producer Mike Gallo has let some new details spring forth like a freshly born facehugger.

Colonial Marines will be slotted neatly into the movie franchise’s time line, placed directly after Alien 3. Rather than exist in its own story bubble, the game almost seeks to be a sequel to the last two films in the franchise. The last two films being Alien 3 and Aliens … there was no Resurrection.

Gallo states that Gearbox’s aim is to “answer some of the questions from those two movies and [pick] up the story right after the marines were wiped out on LV-426.” You will take on the role of a variety of marines as these questions are answered, and four player co-op is of course present.

Gearbox is drawing heavily from the movies, and shall attempt to create a never-before-seen air of authenticity. Syd Mead, who worked on the vehicle design in Aliens, will be on board to re conceptualize his old art, while the studio plans to recreate the same film grain and lighting as the iconic sci-fi sequel. If Gearbox can truly pull off the feeling of being in Aliens, I may possibly sh*t myself.

Of course, the biggest news of all is that the team is working as hard as possible to get the xenomorph drool looking perfect. “We have guys in lab suits in a bunker somewhere testing the viscosity of every liquid under the sun so we can match it with an in-game shader to get the alien drool effect just right.,” Gallo states.