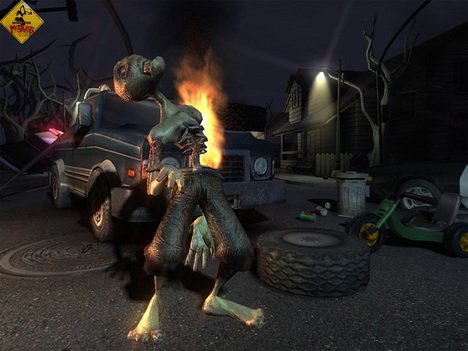 Bad news for fans of potentially great games with disturbingly awkward controls. News from GamingTalkHQ indicates that the upcoming monster bash free-for-all, Monster Madness: Battle For Suburbia (Xbox 360/PS3/PC), has been delayed two weeks (from May 16 to May 29) to work out some Xbox Live networking kinks.

As a huge geek of all things monster related, and one who fondly remembers the classic Zombies Ate My Neighbors, I was extremely hot under the collar for Monster Madness.

It’s a formula you’d think can’t miss — an Unreal Engine 3.0 powered four-player monster bashing romp with online multiplayer. Early builds of the game that I played were fun, but flawed; the controls were awkward, and I had hoped by the time the game went public, this would have been sorted out.

The recent demo that hit Xbox Live suffers from many of the problems I noted nearly a year ago — an extremely broken control scheme; busy, confusing environments; and an eye-strainer of a HUD that had me frantically dialing my optomotrist. The result is a demo (and presumably, entire game) that’s nowhere near as fun as it should be, which makes me sad in the pants area.

Here’s some advice, coming from someone who wants Monster Madness to succeed: delay this game some more. Focus on the real issue and take the control back to the drawing board. Think Robotron or Smash TV, the classic digital mayhem control schemes that have proven to work so well. Because I desperately want Monster Madness to be good, and things are looking bleak.

Oh, and whoever decided that clicking in the right analog stick to jump would be a good idea? Fire that person.

Filed under... #Does it suck?#Zombie