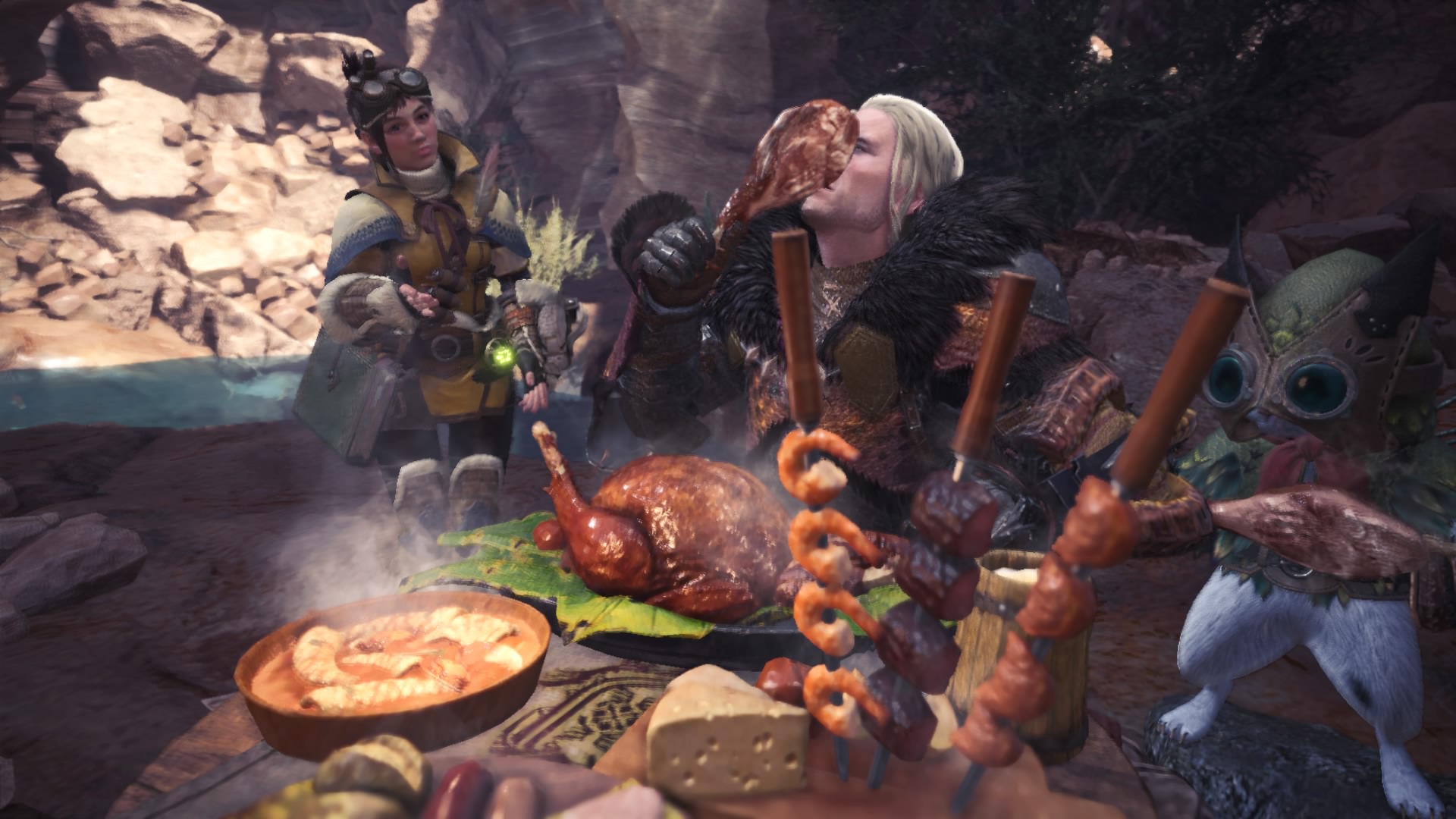 Monster Hunter has always been a wildly successful series in Japan, but it has struggled to get a foothold in the West. Despite every major entry being localized (excluding Monster Hunter XX), the games have just not resonated with a majority of gamers.

In the first reveal trailer for Monster Hunter: World, Capcom seemingly westernized the art style and simplified some of the more obtuse elements of the game to appeal to a wider audience. This had longtime fans wary of World’s final product. After playing roughly five hours of this weekend’s beta, I can safely say that no one had anything to worry about as Monster Hunter: World is still Monster Hunter, for better or worse.

The biggest change for World is that Monster Hunter is no longer confined to the wonderful 240p screens of the 3DS. For the first time since 2011 (in the West, at least), Capcom is releasing a full-fledged Monster Hunter on a console. This is also the first one to be made specifically for a home console since 2009’s Monster Hunter Tri.

As such, Capcom has really gone all out with making it look incredible. While I was only able to play the beta on a base PS4, some of the scenes are just plain gorgeous. The amount of particle effects floating through the air really bring the jungle setting to life and even simple actions like sliding on the ground feel more visceral thanks to mud being kicked up. The lightning model used for this game is also quite excellent and you’ll be treated to plenty of god rays as the sun shifts through the sky.

Along with that graphical prowess comes seamless area transitions, a first for the series. Since console memory isn’t as limited as in the past, Capcom is able to render an entire environment for you to play around in at once. Now when you’re out hunting beasts and they decide to flee, you won’t have to stare at a couple of loading screens should they fly off into the distance. I can see longtime purists balking at this, but I love how dynamic it makes the game feel.

The thrill of the hunt has always been the goal of Monster Hunter, so having to pay close attention to where an enemy is heading and not wasting time getting there adds an extra layer of depth to each scenario. While past games never had monsters moving ahead of you while the game loaded, it was still annoying to be greeted with a loading screen in the middle of an exciting battle. Now the tension can constantly ratchet up while you’re on an enemy’s tail.

Now, I have to admit I’m not an avid fan of the series; the only past game I delved into extensively was Monster Hunter 4 Ultimate. Still, it was pretty easy for me to immediately pick up on some of the gameplay changes Capcom has implemented. While there have been steps taken to make a few of the more deliberate actions more accessible, a lot of the tactical elements of the series are made stronger due to more fluid controls.

I’ve always stuck with the sword and shield weapon, so I was immediately at home with its combo system. Instead of having to stand still during a lot of the animations, you can now move about as your sword swings. The game also constantly has the combo strings in the upper right-hand corner, so you won’t need to exactly memorize how to pull off different actions. Along with that, some new actions have been added to the basic combos that allow quicker mounting of monsters than previous games.

That said, the control scheme is nearly the same as it has been on the 3DS. Sprint is mapped to both L3 and R1 and my old muscle memory immediately kicked in from my roughly 40 hours of 4U. You still have to draw your weapon before attacks and Triangle and Circle (X and A on 3DS) perform the light/strong attacks. Roll is on X (B for 3DS) and Square (Y) uses items. Item selection is about the only thing I think isn’t as solid as the portable counterparts.

Capcom obviously knew this, so there is a brand new favorite system incorporated into the game. I didn’t actually discover this until later on during my hunts, but you can hold L1 to bring up some different menus on the d-pad which then allows you to quickly select inventory items with the right stick. I would be lying if I said this was elegant, but it does at least allow you to hotkey your more frequently used items instead of having to fumble through upwards of 15 different items to find one specific thing (such as a whetstone or potion).

That same menu can also bring up quick communication icons and phrases. Again, having to hold one button, press another, and move a joystick while in the thick of a hunt isn’t what I’d call intuitive, but at least it is something. Accessing the keyboard is far worse, but these modern platforms include this newfangled addition of voice chat that I hear is all the rage. You can just plug in a mic and not bother with the archaic way of chatting.

As for when the hunts are on and you’re in battle, the environments are more dynamic than they’ve ever been. You can trick monsters into ramming walls and pillars and you’ll actually see damage in real time. On my first hunt, I managed to coax a beast into a column and it collapsed all over him. In a team of three, we even saw our noob friend get pushed off a mountain by an impromptu water slide, which was hilarious for everyone involved.

Then there is the fact that monsters will get into struggles with each other, which can add a whole new layer to the combat system. While this sort of happened in previous entries, big monsters will now actively antagonize each other and can start wrestling while you’re attempting to kill one. It is equal parts thrilling and frustrating when you’re laying a smackdown on Anjanath and a Rathalos decides to drop in to kill everyone.

One of the cooler additions is that you can now fast travel between campsites. Along with being entirely seamless, the level design is now a lot more vertically inclined, so you can select to spawn at a specific campsite to avoid trekking all over to reach a monster’s spawn. If you faint during a battle and a monster has moved, though, it can be annoying trying to track it down. Now you can just pull up the map, select the nearest camp, and get into the action much faster.

The camps are also where you’ll be cooking meals to give yourself buffs. This was previously done in the hub worlds of past entries (and might still be in the final game), but there is an actual point to visiting campsites instead of just leaving quests early. What I couldn’t judge from the beta is how your foraging might be used to change recipes, but it seems like you’ll still have an extensive list of dishes that past titles featured.

Some of the items have also received subtle tweaks that make huge ripples for the gameplay. You no longer need to stand still when drinking potions, so getting a quick heal out is a lot safer than it ever used to be. Equipping ranged items now also occupies a separate slot, so you won’t need to go back into your menu to then use the item itself; you just pick a poison knife, put it in your slinger, and shoot it off like a third-person shooter.

Stamina is a lot more generous, as well. While you’ll deplete the bar from sprinting, basic attack actions don’t drain the bar. This could be construed as dumbing down the combat, but everything else functions like normal. Mounting a monster still drains your bar and without bracing for impacts, you’ll quickly lose your grip and fall off. There is a new grappling hook that can get you back on if a monster bucks you, though.

Then there are additions like some tracking mechanics that allow you to actually pinpoint where a monster is. Instead of looking around random areas and throwing a paintball to tag a beast, you can now locate footprints or claw marks and the game will guide you with scout flies. While this has the side effect of always leaving the monster on your minimap, it does feel like a better utilization of the hunter part of the title. It also feels less “videogamey” than eating an item and immediately revealing the monster’s location.

About the only thing I wasn’t exactly hot on was the inconsistent framerate. On base PS4 hardware, the game just doesn’t remain smooth for an extended duration. You’ll get segments that hit 60 FPS, some that are 30, and a lot of numbers in between there. I played with someone on PS4 Pro hardware and they said selecting the “framerate” preference still didn’t hold smooth.

That being said, anyone with access to a Pro (and I assume the Xbox One X) will be able to select between options to prioritize “Framerate,” “Graphics,” and “Resolution.” Framerate lowers the resolution and focuses on delivering a smoother experience, Graphics raises the resolution a bit and delivers stronger visuals, and Resolution bumps the game up to 4K (or thereabouts) and cuts back on visual features to actually get the game running. None of the options are perfect, but having a choice is always a plus.

While I still have a lot of questions with regards to how multiplayer hunts will be set up (the lobbies in this beta required a long password), so far the gameplay of Monster Hunter: World has been excellent. It feels like a great compromise between the older games and a more mainstream-friendly approach without sacrificing the unique qualities that make Monster Hunter so enjoyable.

I really love the changes done to the map design and the presentation is just top notch. Everything feels so smooth in action and the beta remained fun despite redoing the same few hunts over and over. With the announcement that more monsters will be coming post-launch, World is shaping up to be one of the best entries in this long-running series.